Aghaegbune “Ike” Odelugo fraudulently billed Medicare for nearly $10 million worth of medical equipment between 2005 and 2008. On Wednesday, a repentant Odelugo spoke before a congressional subcommittee about how simple it was to commit his crime — and what Medicare could do to make it more difficult. 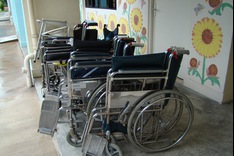 Odelugo, who was convicted in April and is cooperating with authorities while he awaits sentencing, spoke during a crowded day of three congressional hearings on Medicare fraud. He told members of the House Ways and Means Oversight subcommittee that it took him less than a month to put his fraud scheme into practice.

“[Medical equipment] fraud is incredibly easy to commit,” he said. “The primary skill required to do it successfully is knowledge of basic data entry on a computer.”

Medicare has no official estimate of the amount of money lost to fraud each year, but outside estimates put the number in the tens of billions — a “60 Minutes” estimated about $60 billion in 2009.

The issue has gained new prominence this year, as President Obama and others have emphasized that provisions in the health reform law that aim to curb Medicare fraud are a key money-saving part of the bill.

At the hearings Wednesday, the politics of health reform made an appearance.

Republican Rep. Charles Boustany of Louisiana, chair of the Ways and Means oversight subcommittee, said in his prepared remarks “While the Affordable Care Act included some new anti-fraud provisions, it left a lot of suggestions by the Office of Inspector General, Government Accountability Office, and Members of Congress from both parties on the cutting room floor. At the same time, the law created a host of new health care spending programs. The Congressional Budget Office estimates these new programs will cost $940 billion over the next ten years, and much more after that. CBO has estimated the Act’s anti-fraud provisions would save about $5.8 billion over the next ten years. That’s less than one percent of the expected fraud against federal health care programs during the same period.”

But Peter Budetti, director of the Center for Program Integrity at the Centers for Medicare and Medicaid Services, told the House Ways and Means Committee and the Senate Finance Committee that the law is already making a difference, allowing Medicare to move away from a “pay and chase” model of fighting fraud. Instead of paying claims and then later fighting to get that money back, Budetti said, Medicare is gaining more flexibility to keep fraudulent health care billing out of the system.

Also on Wednesday, Sens. Charles Grassley, R-Iowa, and Ron Wyden, D-Oregon, introduced a bipartisan bill to allow public access to a Medicare claims database that details what every provider earns from Medicare.

“The bad actors might be dissuaded if they knew their actions were subject to the light of day,” Grassley said in a statement.

Courts have ruled against opening the database because of privacy concerns, the Wall Street Journal explains.

Find more health coverage on our Rx for Reform page.