Medicare reveals how much it spends on prescription drugs for Americans

The federal government popped the cap off drug spending on Thursday, detailing doctor-by-doctor and drug-by-drug how Medicare and its beneficiaries spent $103 billion on pharmaceuticals in 2013.

The data show that 14 drugs cost the federal government and Medicare beneficiaries more than $1 billion each, accounting for nearly a quarter of Medicare prescription drug spending in 2013. Most of those drugs are used to treat chronic conditions that plague the elderly, including diabetes, depression, high cholesterol and blood pressure, dementia and asthma.

The brand drug Nexium, used to treat heartburn, acid reflux and related stomach ailments, cost the most: $2.5 billion for 1.5 million Medicare patients, who filled 8 million prescriptions and refills. The total cost included what was paid by Medicare, beneficiaries and third party groups such as supplemental health plans. The cost covered not just the drug ingredients but also sales tax and dispensing fees. It did not, however, include sometimes substantial manufacturer rebates, and the drug makers’ trade group warned that omission distorted the actual cost.

The most frequently prescribed drug was Lisinopril, a generic used to treat high blood pressure and help patients survive after heart attacks. The drug was prescribed or refilled nearly 37 million times by more than 7 million Medicare beneficiaries at a cost of $307 million.

The data show that 14 drugs cost the federal government and Medicare beneficiaries more than $1 billion each, accounting for nearly a quarter of Medicare prescription drug spending in 2013.Federal officials said they hoped that disseminating the data would lead to new revelations about the prescribing patterns of doctors and for particular drugs. The database identifies doctors by name.

Niall Brennan, the chief data officer for the Centers for Medicare & Medicaid Services, said agency analysts have been examining the data for several years but that “the data is larger and diverse enough that other outside folks may develop insights that we have missed.”

Dan Mendelson, the CEO of Avalere, a Washington, D.C., consulting firm, said the data could provide patients with new questions about their prescription history when they visit their physician. “It’s really important to stimulate conversations that get patients more actively engaged in their care,” he said.

However, he noted that some doctors may not take kindly to a more inquisitive patient and longer conversations. “In the shorter term, I think it will irk some physicians,” he said. 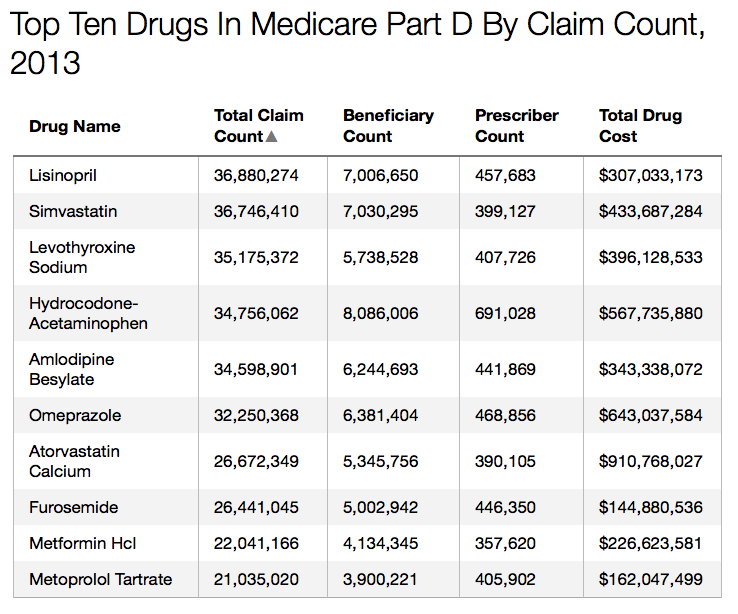 Source: Centers for Medicare & Medicaid Services Get the data

The most expensive drug per prescription was Carbaglu, a man-made enzyme used to treat people with high ammonia levels in the blood caused by a rare disorder, according to a Kaiser Health News analysis of the data. The drug was dispensed only 24 times, but at nearly $60,000 per claim it cost the government $1.4 million.

Among drugs dispensed to at least 10,000 beneficiaries, the most expensive was Revlimid, KHN found. It is used for some cancer patients. Dispensed for 24,637 patients, Revlimid cost $8,778 per claim. That totaled more than $1.3 billion.

Drug prescribing varied considerably among states, KHN found. Rhode Island and Nebraska had the most claims per Medicare beneficiary, averaging 4.6 per patient. Delaware had the lowest number, with the average number of claims per beneficiary at 3.3. 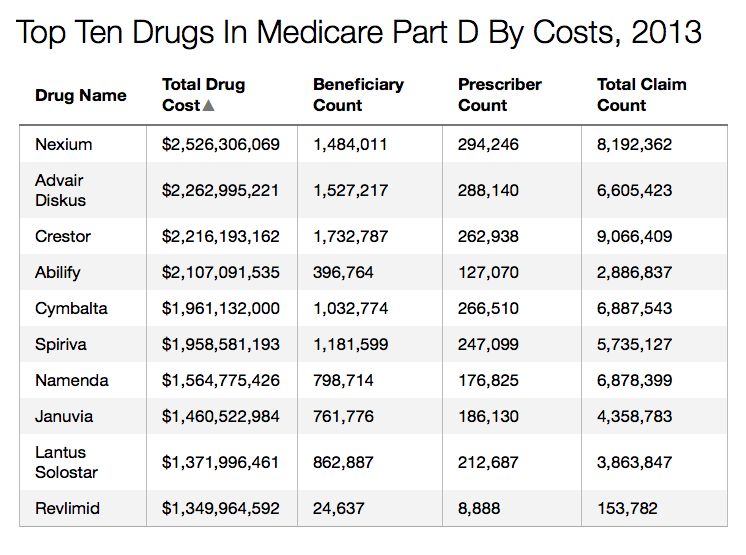 Source: Centers for Medicare & Medicaid Services Get the data

The CMS data is likely to be used in conjunction with other datasets the government has previously released, including what procedures individual doctors billed to Medicare and how much those cost. Analysts are also sure to look for relationships between drugs commonly prescribed by doctors and another Medicare database showing payments physicians received from drug companies for research, gifts, speaking fees, meals or travel.

Pro Publica, a nonprofit news site, obtained similar data for earlier years through the Freedom of Information Act and has already published analyses.

The Pharmaceutical Research and Manufacturers of America called the data misleading. “Significant price negotiation exists in Part D and results in rebates of as high as 20 to 30 percent for branded medicines,” the association’s president, John Castellani, said in a written statement. “These savings are not reflected in the data. Rebates have been a significant factor in keeping Part D program costs hundreds of billions of dollars below original estimates, while still offering beneficiaries steady premiums and a robust choice of plans.”

The American Medical Association also cautioned that the data could be misinterpreted.

“The data does not account for varying strengths or dosage levels of the medications or varying patient needs,” the association said in a written statement. “For example, a physician could prescribe a low dose of a medication and at a later time need to prescribe another, stronger dosage for the same patient if the low dose isn’t meeting their need or if the patient has an adverse react.”

The government noted that the top 10 most commonly prescribed drugs were generic and the 10 most expensive drugs were all brand name. The finding is not surprising since some brand name drugs are protected from competition by their patents.

An analysis Medicare released with the data found that in some parts of the country brand drugs were dispensed much more frequently than generics. Doctors in the western part of the country, including Washington, Oregon, Idaho and Nevada, and parts of in the Midwest leaned heavily toward generics, which tended to be dispensed between 78 percent and 81 percent of times. Brand drugs were favored in much of Texas and Alaska, where generics were dispensed in between 65 percent and 75 percent of cases.

Federal officials also calculated how prescription patterns varied among medical specialties. Family practice doctors prescribed the most drugs, followed by internal medicine doctors. Among the biggest medical specialties, psychiatrists prescribed the most expensive drugs, averaging $104 for a prescription or refill. While hematologists and oncologists were not among the top prescribers, their drugs averaged $550 per claim. The average cost of all prescriptions or refills was $75.

The data does not present a complete picture of physician prescribing. Most notably, it includes only those drugs for 36 million beneficiaries that were billed to Medicare’s Part D program, which make up 68 percent of all the people on Medicare. It does not reflect the prescriptions doctors wrote for privately insured patients or those on other government programs such as Medicaid. It also reveals nothing about the quality of these treatments or what kind of patients each doctor saw. The data also omit drugs administered in doctors’ offices and billed to Medicare’s Part B program.

To ensure that people could not identify beneficiaries, Medicare omitted prescriptions that were based on 10 or fewer claims per drug. That excluded 13 percent of claims.