Meet the ER doctor who poured $1.3 million of his own money to study gun violence

As the ancient Chinese proverb says, from crisis comes opportunity. That is certainly true for Garen Wintemute, a leading gun-violence researcher and emergency room doctor who finds “teaching moments” in the grief-filled days and weeks following mass shootings in America.

He is using a window of opportunity recently opened by the mass shooting in Orlando, Florida, to bring attention to the issue.

Wintemute, once named a “hero of medicine” by Time magazine, has led the Violence Prevention Research Program at the University of California, Davis Medical Center for 25 years. Twenty years ago, the federal Centers for Disease Control and Prevention abruptly stopped funding Wintemute’s program. He has since put up $1.3 million of his own money to keep it running.

Wintemute is one of the nation’s most prominent gun violence experts. He studies the problem from a public health perspective, using empirical research, and then proposes potential solutions based on his findings.

Wintemute’s projects are frequently controversial. His 1996 report on makers of “Saturday night specials” led California state legislators to ban the cheap handguns. Soon afterward, a firearms-manufacturer told him he had put a price on his head.

Wintemute also has proposed stripping the right to buy firearms from people convicted of violent misdemeanors — “a group sometimes referred to as not-so-law-abiding gun owners,” as he wrote in the 2013 book, Reducing Gun Violence in America. 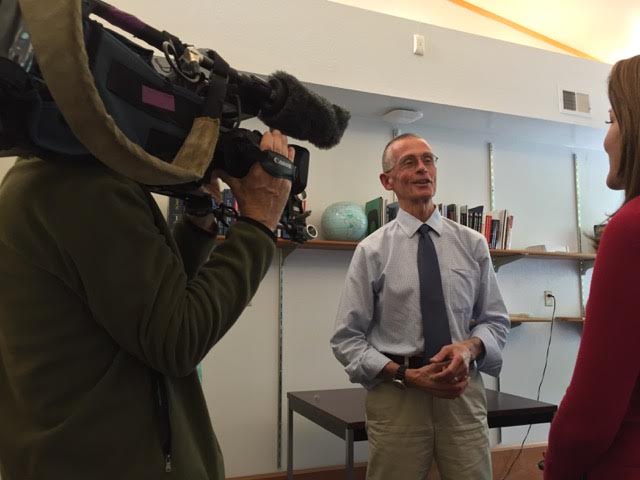 California has adopted this proposal, but the federal government has not. To make his case to U.S. policymakers, Wintemute cites data showing individuals with just one misdemeanor offense — a non-violent one, at that — are five times more likely than people with no criminal background to commit firearm-related or other violent crimes.

He also points out the inherent dangers in plea-bargain arrangements, which can knock a violent felony charge down to a lesser misdemeanor sentence — thereby allowing a released parolee to pass federal background checks to buy guns.

Because of Wintemute’s work and advocacy, extremists send e-mail threats. Gun show dealers circulated a photo of Wintemute, advising firearms salesmen to “forcibly” throw him out if they spotted him. At the time, Wintemute was touring 78 gun shows nationwide — a self-described “guerilla scientist” masquerading as a firearms dealer to collect material for his 2008 book, Inside Gun Shows: What Goes on When Everybody Thinks Nobody’s Watching.

Recently, Wintemute delivered a bold challenge to his fellow physicians. In a research paper published in the Annals of Internal Medicine, he urged doctors to ask patients about their access to firearms, their knowledge of gun-safety, and injury prevention techniques. When Medscape.com posted a news story about it online, 700 comments flooded the site.

Wintemute sat down with California Healthline recently to discuss his life’s work and his reaction to the Orlando shooting.

Q: What was your first response upon learning that yet another mass shooting had occurred, this time in Orlando, killing or wounding 100 people?

My first thought is always about the pain and suffering that will forever be present for family members of those who lost their lives.

Q: Your next response?

I remind the public that deaths by mass shooting account for 1 percent of the people killed by firearms each year. Ninety people a day — day in and day out — die of gunshot wounds, suicides included.

Q: Were you surprised by the flood of opinions and comments that followed the publication last month of your research paper calling for physicians to ask their patients about guns?

I had no idea the proposal would be controversial. What I’d challenged physicians to do was to merely ask patients if they had access to firearms and if they knew how to handle them safely. After a detailed examination of federal and state government legislative language to discourage such lines of questioning, I found none actually outlawed such doctor-patient discussions. So, the paper detailed how physicians could go about structuring these conversations.

Q: Many experts consider gun violence to be a medical or criminal justice issue. Why should we view it through the lens of public health as you do?

Why wouldn’t it be a public health issue? David Satcher, head of the CDC 20 years ago, said, “If it’s not a public health issue, why are so many people dying?” There’s a war going on. Sandy Hook was a tipping point … People get angrier and angrier as this goes on. So we seek out data to identify who’s most likely to commit gun violence. I am an empiricist, a scientist driven by the evidence. This is the public health approach.

Q: What accounts for the increased frequency of mass shootings in the United States?

There are probably a half-dozen factors. There’s ISIS. There has always been hate in America. There’s alcohol and substance abuse. There’s despair, resentment over income equality. There’s more social distance among people. I’m convinced social distance is one of the reasons.

Q: Why is it important for policymakers to seriously consider the policy proposals you and your colleagues have drafted?

We are in dire need of policy overhaul in the United States. Experts, myself included, have closely studied and interpreted statistics showing alcohol abuse contributes to gun violence. In Orlando, witnesses said they saw the gunman drinking at the nightclub before leaving, only to return with his assault rifle and a revolver. Expanding policies that deny gun ownership to individuals with a record of alcohol-related offenses would likely lessen gun violence.

Q: After Orlando, the U.S. Senate again rejected legislation that would have tightened background checks and prohibited gun sales to people on a terrorism watch list. What do you make of that?

Some senators say the list has technical problems, is unreliable and possibly inaccurate. Fine. I say, make a better list. The larger problem is that we’re forced in all cases to make group judgments on eligibility to purchase firearms (felons, domestic violence misdemeanants, etc.). There are members of all these high-risk groups who won’t commit future crimes. We don’t know in advance who will, and who won’t. The only option is to have a policy that applies evenly to all members of the group.

Q: California has some of the tightest gun control laws in the nation. The state Senate, in response to the San Bernardino terrorist shootings last December, recently approved 11 more such measures. What impact will these have on keeping firearms out of the hands of the wrong people?

We’ll have to see them enacted, and then see what their effects will be. Some are not directed at restricting access. (Editor’s note: This interview took place before the full California legislature Thursday approved a package of gun control measures and sent them to Gov. Jerry Brown).

Q: What has your research told you about which populations are most at risk of injury or death by firearms?

Who knew that gun violence is an old white guy problem? Two-thirds of gun violence deaths are suicides. Firearm suicides are going up nationwide. Ninety percent of them occur among middle-aged to older white men, especially in rural areas with lower incomes and higher opioid use.

Q: What were the circumstances surrounding your loss of funding from the Centers for Disease Control and Prevention?

From 1989 to 1996, we received CDC funding. Then, the CDC cut grants specifically for firearms violence. Our research funding, my salary, disappeared. Congress had just outlawed using federal dollars for gun violence research. We turned to grants and private donors to close the gap. But there were still electric bills, gas bills and some staff salaries that research dollars would not cover. About 10 years ago, I decided the work we are doing here is really good and should be supported. I decided to keep the lights on myself and told staff, “You will be paid.” Over the years, I poured $1.3 million into the research program. I will continue.

Left: Guns are seen inside a display case at the Cabela's store in Fort Worth, Texas. Photo by Jessica Rinaldi/Reuters