Meet the R2D2 of hospital technology

Meet the Tugs — a team of 27 robots now zooming around the hallways of the new University of California-San Francisco hospital at Mission Bay. They look a bit like R2D2, dragging a platform around behind them. Instead of drones, think of them more as little flatbed trucks, ferrying carts of stuff around the vast hospital complex — food, linens, medications, medical waste and garbage. And they do it more efficiently than humans.
“This one is going up to one of the floors. It’s carrying meals that were ordered in probably the last 20 minutes,” said Dan Henroid, who is in charge of this elite fleet, as he pointed to a robot motoring by him.

Henroid, who is also director of nutrition and food services for the USCF Medical Center, says each Tug travels about 35 miles each day. Over the past year, they have made more than 157,000 trips through the hospital.

Henroid said no one in the hospital has lost a job to the robots. UCSF was in the midst of a hiring spree for the new hospital, and the Tugs allowed him to hire about 30 fewer workers than he would have otherwise.

He added that the robots are really just carting things from one point to another, something most humans would not find particularly rewarding. “The Tug has a job to do, and it’s sort of a thankless job. So, I think, better to have a robot doing it, perhaps, than a human.”

But not everyone in the hospital is such a big fan of the Tugs.

She says over the past year, the robots have gotten better. But for Thompson, there’s still the issue of jobs.

“Definitely there are jobs lost, which is kind of interesting to me because with the economy the way it is, you’d think people need jobs. And then we have these robots doing them,” said Thompson. 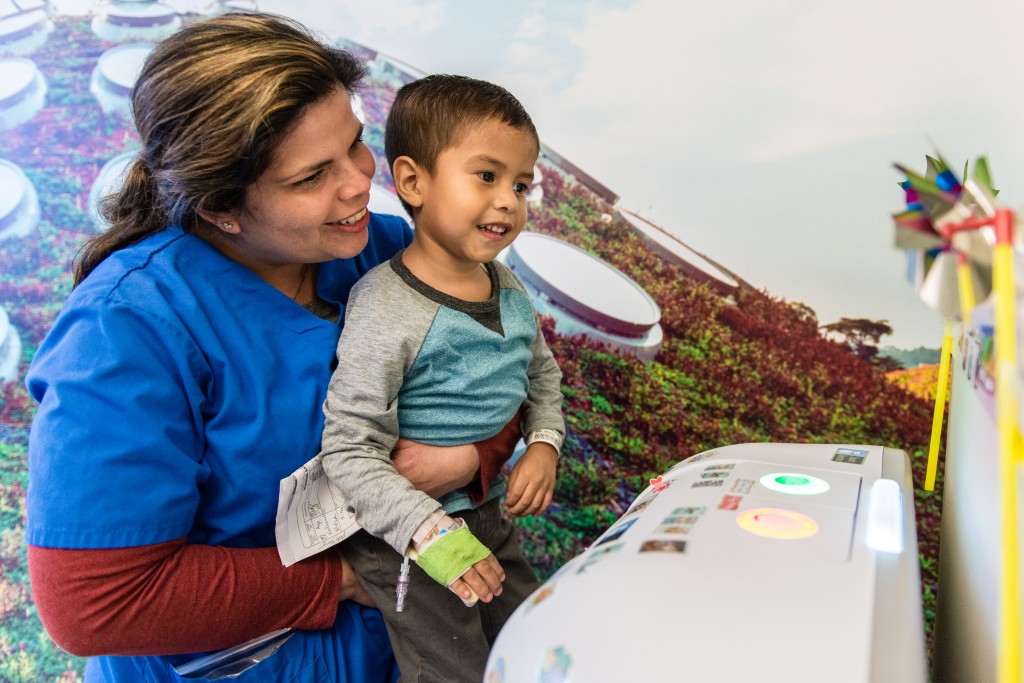 Overall, the Tug program has cost UCSF about $6 million, including the changes required to hospital infrastructure to accommodate the robots. But Henroid said they have still saved the hospital money. “The cost of transporting materials and supplies waste is an overhead cost. So the more you can do you that efficiently, the less cost you have,” he explained.

About 120 hospitals throughout the U.S. are using Tugs, according to manufacturer Aethon in Pittsburgh, Pennsylvania.

For some departments, such as the bustling hospital kitchen where the Tugs pick up carts loaded with trays of food and drop off dirty dishes, employees have eagerly adopted their automated co-workers. “In nutrition food services, we named all of ours for fruit — so we have Apple, Pear, Blueberry, Orange and Grape,” explained Henroid.

The Tugs are kind of cute, but also a little unnerving, as they shuttle past other hospital workers like they own the joint. Each one is carefully programmed to stay out of the way, said Henroid, but sometimes it feels as if one could mow down a bystander.

In a moment of bravery, a visitor decided to step in a Tug’s path. It headed straight for her, but stopped suddenly a safe distance away.

Henroid seemed pleased: “You have faith! See, it stopped 2 feet away from you. You thought it was gonna run into you.” The Tugs have sensors along their base that can tell if anything is in their way.

The robots have very little contact with patients. They mostly stay in the hallways or nurses’ stations, where human workers pick up their goods and deliver them to patients in person. When the kids in the children’s hospital catch a glance, however, it’s quite a scene.

Medical-surgical unit coordinator Michael Eckenrode pointed out a half dozen plastic toy vehicles nearby, including a cab and a bike.

The children like to climb aboard and ride them around the unit. “When the robots come the kids start screaming ‘Robots’ and they follow them down the hall. And it goes down around the corner and opens the elevator and gets on by itself. So that’s like a magic thing for them,” said Eckenrode.

Rogelio Diaz-Ramirez, an adorable three-year-old, was in the hospital with a lung infection, but he couldn’t stop smiling at just the thought of seeing a robot for the first time.

“We’re going to search for a robot!” said nurse Sonia Salinas in Spanish, as she took Rogelio’s hand and led him through the hallway.

Salinas spotted a Tug coming down the corridor. “Robot! Come on! Run, Run!” she told Rogelio.

When he caught up, Rogelio looked awestruck. Salinas showed him how to press the big green and red buttons on top that make the Tug go and stop. Until it’s time for the Tug to attend to its next assignment.

“Say Goodbye. Goodbye, Tuggy!” she told him. “Adios!” said Rogelio with a wave.