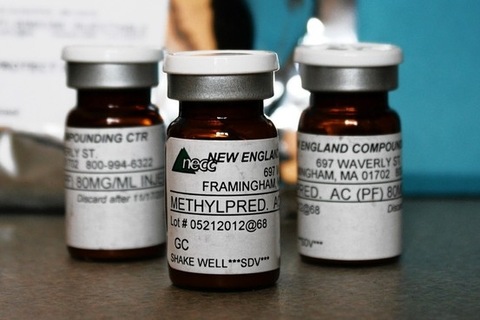 Contaminated vials like these, produced at the New England Compounding Center in Framingham, Mass., were responsible for this latest outbreak of fungal meningitis. Photo by Minnesota Department of Health.

It was just some neck pain — nothing too alarming. But Diana Reed had recently lost her job and was trying to use her health insurance while she still had coverage.

She expected the steroid treatment would bring some relief, and as the sole caregiver of a husband with Lou Gehrig’s Disease, she needed it. Instead, just hours after the last of three injections, the headaches began. She died several days later.

Diana Reed’s name is now part of a tally tied to black-mold-infected steroids produced at the New England Compounding Center in Massachusetts: 32 dead, 438 infected, 19 states with cases. As U.S. legislators convene two separate congressional hearings on the matter this week, NewsHour health correspondent Betty Ann Bowser travels to Diana’s hometown in Tennessee for a more personal take on the tragedy. Tune in for her full report Wednesday evening.

In the meantime, some context — straight from the Centers for Disease Control and Prevention in Atlanta. Several weeks ago, the CDC, in coordination with the Food & Drug Administration and local health officials, launched a multi-state investigation of fungal meningitis and other infections among patients who received the contaminated steroid injections.

The official tally from that investigation is illustrated in the map below. Click “play” to see how the outbreak has impacted your state. Below that, the CDC lists the “Top 10” things you should know about the disease.

Some meningitis infections clear up on their own. Some can kill you in a matter of days — it all depends on the type. The fungal variety is quite different than the kind that spreads so easily in dorm rooms and other crowded places. Unlike its bacterial and viral cousins, fungal meningitis is not contagious.

Need a cheat sheet to help keep it all straight? The CDC thinks you should remember 10 easy bullet points about this surprisingly complex disease. Here they are:

1. There are five “types” of meningitis.

Meningitis may develop in response to a number of causes, usually bacteria or viruses, but meningitis can also be caused by physical injury, cancer or certain drugs.

The five “types” of meningitis are:

The severity of illness and the treatment for meningitis differ depending on the cause. Thus, it is important to know the specific cause of meningitis. For the ongoing outbreak of fungal meningitis and other infections linked to contaminated steroid medication, fungus was discovered as the cause. More on that below. But let’s first look at some of the other types of meningitis and facts you need to know.

2. There are vaccines that protect against three types of bacteria that can cause meningitis.

Bacterial meningitis is usually severe and can be life-threatening. While most people with meningitis recover, it can cause serious complications, such as brain damage, hearing loss or learning disabilities. In the United States, about 4,100 cases of bacterial meningitis, including 500 deaths, occurred each year between 2003-2007.

Other meningitis-causing bacteria are not spread person-to-person, but can cause disease because the person has certain risk factors (such as a weak immune system or head trauma). And finally, unlike other bacterial causes of meningitis, you can get Listeria monocytogenes by eating contaminated food.

The most effective way to protect you and your child against certain types of bacterial meningitis is to complete the recommended vaccine schedule. There are vaccines for three types of bacteria that can cause meningitis: Neisseria meningitidis (meningococcus), Streptococcus pneumoniae (pneumococcus), and Haemophilus influenzae type b (Hib).

3. There are things that can increase your risk of bacterial meningitis.

Factors that can increase your risk of bacterial meningitis include:

Age: Infants are at higher risk for bacterial meningitis than people in other age groups. However, people of any age are at risk.

Certain medical conditions: There are certain diseases, medications, and surgical procedures that may weaken the immune system or increase risk of meningitis in other ways.

Bacterial meningitis infection may show up in a person by a sudden onset of fever, headache, and stiff neck. It will often have other symptoms, such as nausea, vomiting, increased sensitivity to light, and confusion. Infants may appear to be slow or inactive (lack of alertness), irritable, vomiting or feeding poorly. The symptoms of bacterial meningitis can appear quickly or over several days. Typically they develop within three to seven days after exposure. Later symptoms of bacterial meningitis can be very severe (e.g., seizures, coma). For this reason, anyone who thinks they may have meningitis should see a doctor as soon as possible.

4. Symptoms of viral meningitis in adults may differ from those in children.

Viral meningitis is generally less severe and resolves without specific treatment. However, the symptoms of viral meningitis are similar to those for bacterial meningitis, which can be fatal. Because of this, it is important to see a health care provider right away if you think you or your child might have meningitis.

5. There are no vaccines for the most common causes of viral meningitis, so the best way to prevent it is to prevent viral infections.

Most viral meningitis cases in the United States, especially during the summer months, are caused by enteroviruses (small viruses made of RNA and protein); however, only a small number of people with enterovirus infections actually develop meningitis.

There are steps you can take to help lower your chances of becoming infected with viruses or of passing one on to someone else:

6. Fungal meningitis is very rare in the United States, but is more common in places such as sub-Saharan Africa.

CDC is currently working with countries in Africa and Asia to begin screening for Cryptococcus. We have new rapid diagnostic tests that will allow clinicians to detect fungal meningitis early among HIV positive patients, which will help them receive treatment earlier and has the potential to save hundreds of thousands of lives. There are about a million cases of fungal meningitis in sub-Saharan Africa every year, and about 600,000 deaths — even more deaths than are caused by tuberculosis, so this screening has the potential to make a huge impact in these countries.

7. Fungal meningitis is not contagious.

You may also get fungal meningitis after taking medications that weaken your immune system. Examples of these medications include steroids (such as prednisone), medications given after organ transplantation, or anti-TNF medications, which are sometimes given for treatment of rheumatoid arthritis or other autoimmune conditions.

Symptoms are similar to symptoms of other forms of meningitis; however, they often appear more gradually and can be very mild at first.

Fungal meningitis is treated with long courses of high-dose antifungal medications, usually given through an IV line in the hospital. The length of treatment depends on the status of the immune system and the type of fungus that caused the infection. For people with immune systems that do not function well because of other conditions, like AIDS, diabetes, or cancer, treatment is often longer.

8. The United States is currently experiencing an unprecedented multi-state outbreak of fungal meningitis and other infections.

The Centers for Disease Control and Prevention (CDC), in collaboration with state and local health departments and the Food and Drug Administration (FDA), is investigating a multistate outbreak of fungal meningitis and other infections among patients who received contaminated steroid injections. The infections identified as part of this investigation include fungal meningitis, a form of meningitis that is not contagious, and infections associated with injections in a peripheral joint space, such as a knee, shoulder, or ankle.

All of the infections were associated with one of three lots of preservative-free methylprednisolone acetate, an injectable steroid medication recalled on September 26, 2012, from the New England Compounding Center (NECC). See CDC’s website for more information about what patients need to know.

Primary amebic meningoencephalitis (PAM) is a very rare form of parasitic meningitis that is caused by the microscopic ameba (a single-celled living organism) Naegleria fowleri.

Naegleria fowleri infects people by entering the body through the nose. This typically occurs when people go swimming or diving in warm freshwater places, like lakes and rivers. The Naegleria fowleri ameba travels up the nose to the brain where it destroys the brain tissue.

No data exist to accurately estimate the true risk of PAM. The hundreds of millions of visits to swimming venues that occur each year in the U.S. result in 0-8 infections per year.

Naegleria fowleri is found around the world. In the United States, the majority of infections have been caused by Naegleria fowleri from warm freshwater located in southern-tier states. The ameba can be found in:

Naegleria fowleri is not found in salt water, like the ocean.

Several drugs are effective against Naegleria fowleri in the laboratory. However, their effectiveness is unclear since almost all infections have been fatal, even when people were treated. The fatality rate for an infected person who begins to show signs and symptoms is over 99 percent. Only 1 person out of 123 known infected individuals in the United States from 1962 to 2011 has survived.

10. There are several things that can cause non-infectious meningitis.

This type of meningitis is not spread from person to person. Like other types of meningitis, symptoms of non-infectious meningitis include a sudden onset of fever, headache and stiff neck. It is often accompanied by other symptoms, such as nausea, vomiting, photophobia (sensitivity to light), and altered mental status.

If you still have questions about meningitis, join the NewsHour’s live chat with the CDC’s Dr. Amanda Cohn and Dr. Benjamin Park on Thursday, Nov. 15, at 1 p.m. ET. Submit your question in the comments section below or participate in the conversation live on Thursday.