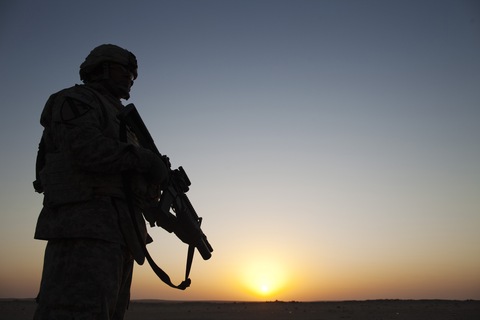 It’s been well-documented that the military has a significant problem with suicide, substance abuse and mental disorders in its ranks. Just this summer, the Pentagon reported an 18 percent increase in suicide cases alone in just one year. In the first half of 2012, the suicide rate among the nation’s active-duty personnel outpaced the number of troops dying in battle.

And although the Department of Defense doesn’t fully understand why there is more drug abuse and more emotional problems, it’s thought there may be a connection to repeated deployments to Iraq and Afghanistan. Defense officials say that U.S. troops have never fought wars for so long with this small of a military.

Top brass has poured millions of dollars into treatment and prevention programs, and the Pentagon has made it clear that everyone in uniform who seeks medical treatment are not to be stigmatized.

But in spite of a major effort to deal with rising cases of substance abuse and addiction on the part of the Pentagon, the prestigious Institute of Medicine is now saying that the Pentagon needs to do more.

In a report requested by the Department of Defense and released on Monday, IOM said treatment and prevention programs are “inconsistent” in their use of evidence-based medicine and that health care providers aren’t adequately trained at all levels, which contributes to “lower quality care.” Evidence-based medicine is a term used to describe the treatment of patients with therapies that have been proven to be effective.

The report said that too often, outdated drugs are prescribed to patients instead of newer drugs “that are now standard practice” in civilian life. It criticized TRICARE, the military’s health care program for soldiers and their dependents, for not covering some newer medications unless the patient is in “specialized rehabilitation facilities” and recommended that its benefits be revised to give soldiers better treatment when they are living in the larger community.


The IOM took special note of data that says alcohol abuse is rising, with about 20 percent of active duty personnel reporting they have engaged in heavy drinking in 2008, the latest year for which data are available.

Dr.Charles O’Brien, who chaired the report, told the NewsHour that his panel “repeatedly recommended” that the Pentagon use “modern treatment for addiction, and modern treatment means a heavy emphasis on outpatient care,” when possible, instead of placing patients in drug rehabilitation facilities.

He also said the military needs to understand that modern addiction treatment means using drugs like Suboxone, which has been used successfully in civilian life to treat opiate addiction, and Vivitrol, which reduces a patient’s craving for alcohol or narcotic drugs.

Dr. O’Brien said both drugs need to be more readily available in military medicine, adding “the average guy” can’t get them.

The IOM’s findings come as no surprise to anyone who’s been reporting on this issue. But what was striking to this reporter was how out-of-date the IOM found the current treatments to be.

For years now, the NewsHour has been reporting on the growing problems of substance abuse, suicide and Post-Traumatic Stress Disorder among Iraq and Afghanistan veterans. And while today’s report does not address the Pentagon’s overall response to these issues, it said “to tackle these disorders better, DoD needs to lead from the top” to assure that all branches of of the service “take excess drinking and other substance abuse as seriously as they should”.

Earlier this year, we reported how the Army has spent millions of dollars to train every man and woman in uniform how to be more psychologically resilient with its Comprehensive Soldier Fitness program. Soldiers are required to attend a number of hours of resilience training consisting of lectures and drills the Army says will make its people less likely to develop emotional problems.

The story also included strong criticism of the program from a number of prominent people in the psychiatric community who said the Army was trying to “brainwash” its entire military population with a program that has no sound science behind it in evidence-based medicine.

We also reported on a young Tennessee woman whose husband shot himself to death in the bedroom of their home after being diagnosed with Post-Traumatic Stress Disorder. She detailed what she believed to be inadequate medical intervention by the Veterans’ Administration and how the VA had stonewalled him on benefits he was entitled to. She later filed suit against the government and was awarded over $400,000 in back benefits.

It was about a young reservist from Colorado who was thrown out of the military after holding up a convenience store at gunpoint. He had tried and tried to get help for Post-Traumatic Stress Disorder but to no avail.

He had been unable to get a job since all of this and both he and his wife were worried about what would become of them and their baby.

The soldier finally got help outside of the military health care system with a private psychiatrist who told us she was very concerned about him. She said at the time, “This man isn’t a criminal, he’s sick.”

This young man was clearly filled with uncontrollable anger about what had taken place in his life and had a young wife who seemed overwhelmed with their situation. She told me and my NewsHour crew that she was fearful of what he might do.

After interviewing the couple, we made our way toward the front door. That’s when I could not help but notice something that still rattles around in my brain today. Sitting beside the front door was a shotgun.

I have no idea what happened to this troubled young man because the NewsHour lost touch with him after reporting the story. I have no reason to believe he ever used that shotgun to himself or anyone else. To me, his situation was a dramatic example of what wars can do to a soldier’s mind. It also shined a light on how the Pentagon often treats a mental disorder by using punishment instead of treatment.

Stigma against soldiers who seek help for drug abuse and mental health issues is a well-known part of military life.This is is a “tough guy” culture in which soldiers are expected to “suck up” and go on no matter how disturbed they may be.

Today, the IOM took note of that and called on the Pentagon to “lead from the top” in better addressing its struggle with drug abuse and mental health disorders in its ranks.

Dr. O’Brien said the IOM panel asked TRICARE last year to include some of the newer treatment drugs to its benefits list. “We had the heads of TRICARE last year telling us that they could fix this,” he said. “It’s still not fixed.”

When the NewsHour asked the Department of Defense for a reaction to the report, a spokeswoman said, “If there are areas in need of improvement, then we will work to improve those areas. The health and well-being of our Service members is paramount.”