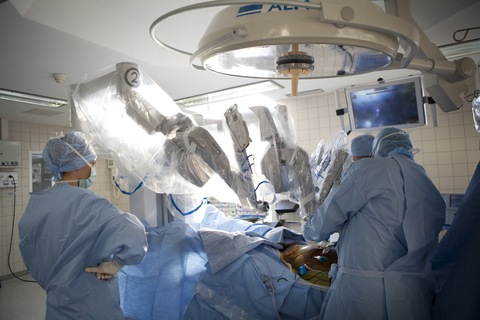 A Da Vinci Robotic System assists with surgery at Diaconesses hospital in Paris, France in 2012. Photo by Getty Images

The use of robotic surgical systems is expanding rapidly, but hospitals, patients and regulators may not be getting enough information to determine whether the high tech approach is worth its cost.

Problems resulting from surgery using robotic equipment–including deaths–have been reported late, inaccurately or not at all to the Food and Drug Administration, according to one study.

The study, published in the Journal for Healthcare Quality earlier this year, focused on incidents involving Intuitive Surgical’s da Vinci Robotic Surgical System over nearly 12 years, scrubbing through several data bases to find troubled outcomes. Researchers found 245 incidents reported to the FDA, including 71 deaths and 174 nonfatal injuries. But they also found eight cases in which reporting fell short, including five cases in which no FDA report was filed at all.

The FDA assesses and approves products based on reported device-related complications. If a medical device malfunctions, hospitals are required to report the incident to the manufacturer, which then reports it to the agency. The FDA, in turn, creates a report for its Manufacturer and User Facility Device Experience database.

The use of surgical robots has grown rapidly since it was first approved for laparoscopic surgery (a type of surgery that uses smaller incisions than in traditional surgery) by the FDA in 2000. Between 2007 and 2011 the number of da Vinci systems installed increased by 75 percent in the United States from 800 to 1,400, according to the study.

Noting that robotic surgery has promising benefits, the study also called it “essential that device related complications be uniformly captured, reported and evaluated,” so the medical community fully understands “the safety of the new technology.”

Intuitive Surgical, the makers of the da Vinci device, released a statement last month taking issue with the study’s findings.

“The Journal for Healthcare Quality article gives the misleading impression that Intuitive Surgical has systematically failed in its obligation to timely report known adverse events to the FDA,” the statement said. “Intuitive Surgical can only report adverse events after it becomes aware of them. We take this requirement very seriously and make every effort to account for all reportable events–even those from several years prior.”

The company said it agreed regarding the “need for a more robust and standardized system for reporting adverse events” but also encouraged the study’s authors “to conduct a comparable study that assesses the under reporting of both open and laparoscopic surgical events and would welcome a comparison with robotic-assisted surgery.”

Dr. Martin A. Makary, an associate professor of surgery and health policy and management at John Hopkins University and one of the study’s authors, said that, while the future for robotic surgery is promising, there is a gray area when it comes to assessing the difference between doctor and device error. And benefits from the use of the device may be inconsistent, he said. Robotic surgery has shown benefits when it comes to head and neck surgery, he said, but there’s not necessarily a stark difference between a conventional laparoscopic or robotic-assisted surgery when it comes to gall bladder removal.

Comparing patient outcomes from conventional and robotic surgeries is important for determining which is best for patients and insurers and whether it is worth the extra cost. A study in the Journal of the American Medical Association compared robotically assisted hysterectomies with traditional laparoscopic surgeries over a three year period and found the former added an average of $2,000 in costs per procedure–nearly a third higher–with no significant clinical advantages.

Noting that information, the American Congress of Obstetricians and Gynecologists released a statement in March, advising patients that “robotic hysterectomy is best used for unusual and complex clinical conditions in which improved outcomes over standard minimally invasive approaches have been demonstrated.” The ACOG statement noted that “if robotic surgery is used for all hysterectomies each year,” it would add an estimated $960 million to $1.9 billion to the annual cost of hysterectomy surgeries.

Even if better data were available through the FDA, that information might not make it to the patient.

Makary and his co-authors noted an earlier finding that “among the 37 percent of U.S. hospitals that describe robotic surgery on their hospital website, none mentioned any potential risks or complications.

“We rely on a haphazard reporting system that uses immature data and only the best experiences make it into the data,” Makary said. “We introduce things but we don’t evaluate them very well. If we’re relying on the FDA about what (products) are superior, then we need a new process…you can’t make conclusions on the safety profile of a device based on a shoddy reporting system.”

The study noted that one patient’s injury and death occurred in 2009, but no such incident was found in the FDA’s database for that year. The authors found “a very late report matching his case in 2010,” received by the FDA two weeks after the Wall Street Journal ran a story citing the case.

The agency issues warning letters to manufacturers who fail to meet their reporting obligations. If manufacturers still fail to report incidents, the FDA can exercise enforcement and compliance options, including product seizures or injunctions.

But the agency admits that its reporting system has limitations.

“Complaints or adverse event reports do not necessarily directly indicate a faulty or defective medical device, and adverse event reports alone cannot be used to establish or compare rates of event occurrence,” said FDA spokeswoman Synim Rivers in an email. “For these reasons, the FDA also evaluates other information to make decisions about a device’s safety and effectiveness once a device is on the market.”

James F. Blumstein, director of the Vanderbilt Health Policy Center and Professor of Constitutional Law and Health Law & Policy, said with robotic surgery, for patients it’s not necessarily about knowing which procedure would be best but being fully informed of their options. He said that if there are known injuries and routine problems, health care providers need to disclose that information to patients.

“If you as a patient are going to a doctor, and they’re using a robot, it’s a question of who’s in charge,” Blumstein said. “If it’s a mechanical malfunction, would the professional standard of care apply to a robot?”

If problems occur during robotic surgery and subsequent litigation, a question might arise about whether the doctor, the hospital or the manufacturer was responsible, introducing the potential issue of product liability. But there may be protection for doctors performing robotic surgery in disclosing the risks, Blumstein said.

“If a doctor discloses to a patient there’s a comparative risk (between regular surgery and robotic surgery) and that disclosed risk materializes, I would have a hard time thinking the doctor would be considered negligent,” he said.

Kaiser Health News is an editorially independent program of the Henry J. Kaiser Family Foundation, a nonprofit, nonpartisan health policy research and communication organization not affiliated with Kaiser Permanente.
By —