Most babies aren’t breastfed in their critical first hour of life, study shows

Research has linked breastfeeding in a baby’s first hour of life to reduced infant mortality. But worldwide, most babies are not breastfed during that critical first hour, according to a recent report, and that concerns many public health and child nutrition experts.

In a report released this week from the World Health Organization and UNICEF, only 42 percent of babies drink breast milk during the first hour of life.

“These low global rates of early initiation of breastfeeding are evidence of a massive missed opportunity worldwide,” the report said. 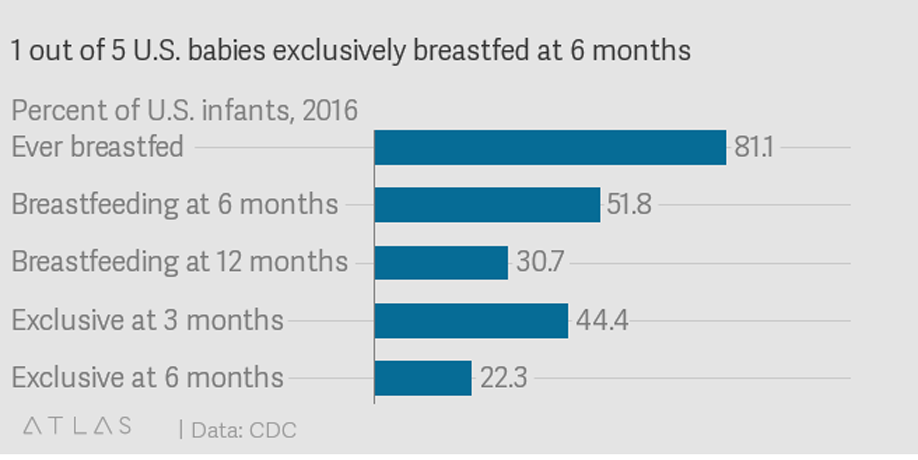 What were the study’s findings? In 2017, two out of five babies received breast milk within the first hour of life. During that first hour, 42 percent of infants worldwide tried latching and drank colostrum, a nutrient-rich breast milk produced around the time of birth. But that means an estimated 78 million babies waited for an hour or more, and those rates varied worldwide.

The highest regional rates were found in Eastern and Southern Africa where about two-thirds of newborns are breastfed during the first hour, a rate double that of babies born in East Asia and the Pacific. No data was available for North America or Europe, the report said.

And while the rate of babies being breastfed during their first hour of life has climbed from 37 percent in 2005 to 42 percent in this latest data, UNICEF nutrition breastfeeding expert Maaike Arts said progress is moving too slowly. More countries are developing and adopting policies that promote breastfeeding, Arts said, but that must be combined with appropriate training for health workers and community awareness.

“There isn’t one magic bullet,” she said. “You need to have all of these in place.”

Often, health care workers may separate a mother and infant immediately after birth, losing that critical first hour. If a woman delivers by caesarean section, medical staff may be reluctant to allow her to engage in skin-to-skin contact with her baby or breastfeed, out of concern for possible infection. But even in with c-section deliveries, Arts said there are safe methods a woman can use to breastfeed her child during that first hour.

Why does this matter? Research suggests breastfeeding provides benefits for mothers and infants. For babies, breast milk provides adequate nutrition, builds the immune system, prevents the risk of illness or obesity later in life and offers an opportunity for mother and child to bond.

But breastfeeding can be challenging for some women, in part due to lack of support. In recent years, data suggested one out of four women returned to work less than two weeks after delivering a baby.

For years, the World Health Organization has promoted early breastfeeding within the infant’s first hour of life, saying that babies may display feeding cues, such as rooting, as early as the first 15 minutes after they are born. Most importantly, a woman who chooses to breastfeed a baby for the first time needs the support of family, friends, health care workers, employers and her community, Arts said.

Where does the United States stand? On July 8, the Trump administration stunned public health and child advocates when the U.S. pressured Ecuador to withdraw a UN-affiliated resolution supporting breastfeeding. Critics said the U.S. yielded to pressure from the infant formula industry, ignoring evidence that shows breast milk, if available, is best for a baby’s growth and development.

In a tweet, President Donald Trump defended the position, saying, “The U.S. strongly supports breastfeeding but we don’t believe women should be denied access to formula. Many women need this option because of malnutrition and poverty.”

For this latest global study, researchers analyzed data from Demographic and Health Surveys, funded through USAID. In those surveys, mothers of children age 2 or younger were asked to answer yes or no if their child was breastfed in the first hour of life, was wrapped to stay warm, given a full bath after birth and more. Researchers also used UNICEF’s’s Multiple Indicator Cluster Surveys.

These surveys are often conducted in low- and middle-income countries, generating richer breastfeeding data that can be used to see if policies and practices are working or not. For example, in Serbia, early breastfeeding rates had declined from 17 percent in 2005 to 8 percent five years later, the report said. The Serbian government responded to those single-digit numbers with policies that encouraged the institution of baby-friendly hospitals, where breastfeeding is prioritized, and Serbia eventually folded this health care model into its hospital accreditation standards. By 2014, the early initiation rate rose to 51 percent, according to the report.

But these numbers aren’t collected in the same way within industrialized countries, Arts said. In 2007, nearly three-quarters of U.S. babies — 74 percent — were ever breastfed, according to data from the Centers for Disease Control and Prevention. Among 19 developed nations at the time, 15 countries reported having rates of 80 percent or higher, Arts said, leaving the United States with one of the lowest breastfeeding initiation rates in that group. By 2016, the number of babies ever breastfeed rose to 81 percent in the U.S.. By the time a baby reaches six months, that number drops nearly 30 percentage points with just over half of U.S. babies exclusively breastfeeding. The WHO wants to see that number double worldwide by 2025.

Despite increasing breastfeeding rates across much of the United States, some states languish. Since 2007, Mississippi rose by only two percentage points with 52 percent of babies ever breastfeeding — the nation’s lowest rate — followed by Louisiana and West Virginia. At the other end of the spectrum is Utah with 94 percent, followed by Idaho and Oregon.