On December 12th, 3:45 p.m. MST, I received a text from my 29-weeks-pregnant wife saying that her water might have broken. At 12:07 a.m. the next morning, Bradley was born, 11 weeks early. Ninety minutes later, I was allowed to formally meet him.

He was two pounds, 11 ounces with long fingers and toes. He had wires and tubes everywhere and was attached to a breathing device called a CPAP that forced air into his lungs. Seeing him for the first time was scary, overwhelming, and one of the greatest moments of my life. I never knew I could love something this much in an instant. He came so early we did not even have a name until his second day of life. The nurses and doctors were nothing but positive that by end of his stay, he would lose all these wires and cords and just be Bradley.

I received a text from my 29-weeks-pregnant wife saying that her water might have broken. At 12:07 a.m. the next morning, Bradley was born, 11 weeks early.

In order to be released, the NICU doctors told us he would need to gain weight on a consistent basis, about an ounce every couple days, breathe without machine assistance, and learn to suck and swallow. He might face invasive painful procedures if his body was not developing properly or there were any complications. We were told over and over again that this process of him growing and adjusting to life outside the womb would be stressful, not just for his parents, but for him. We were given a timeline of 10 to 16 weeks, but there was no predicting how long it would take him to meet these markers.

READ MORE: The simple acts of care that could help premature babies develop

On his second day of life, while I was sitting next to my son’s isolette, a woman approached me. She described herself as a “NICU music therapist.” She had a guitar and other instruments specially designed for the NICU draped over her shoulders, and she claimed she had scientifically proven ways of alleviating the stress that both my son and his roommates felt with the use of music and other sound-making devices. She claimed that her work could potentially reduce Bradley’s days in the NICU. This idea of music therapy helping premature babies weighing as little as a pound reduce their days in the NICU sparked my curiosity. 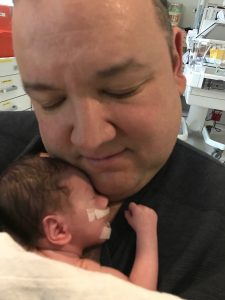 Terry Rubin with his son, Bradley. Photo courtesy of the author

I began to talk to the other parents in the NICU and asked if they were taking part in the music therapy services. To my surprise, most were, and admitted that it did help calm their children. Evelyn Gama gave birth 14 weeks early to her 1 pound, 10 ounce son Henry. He spent more than three months in the NICU going through a couple surgeries to remove fluid from his brain before he was released. Gama believes the therapy helped her son.

“His oxygen saturation rate would fall at times, and the music therapy would get him to breathe at a more regular rate and normalize the oxygenation,” she said, adding that the low tones, wave sounds and music also helped calm the parents.

These music therapists have doctorates or Master’s degrees in their field and go through an extensive internship training in hospitals. The three full-time and 14 intern music therapists at Mt. Sinai West, where my son was born, received their training at the Louis Armstrong Center for Music and Medicine. A study published in the journal Pediatrics in 2013 that proved music therapy can improve a preemie’s breathing, heart rate, feeding and sleep and, in some cases, possibly reduce the number of days in the NICU. The study followed 272 premature infants in 11 hospitals and found that the music, provided by a certified music therapist, offered stress relief for the parents too.

Music therapy can improve a preemie’s breathing, heart rate, feeding and sleep and, in some cases, possibly reduce the number of days in the NICU.

The center has also introduced something called “songs of kin.” This involves teaching parents to adopt and use songs that are meaningful to them.

“We want to enhance a parent’s capacity to bond, because we want the parents to be able to know what to do when the baby is irritable,” said Joanne Loewy, founder of the Louis Armstrong Center for Music and Medicine. Choosing a song that connects culturally to the family helps build a family bond. “You don’t sing any old song to a baby. If the parents are Indian, they will have no relevance with an American lullaby. Currently, we are recording a Hebrew prayer in the key of the mom, to work with the baby so that there is continuity of care when he goes home.”

Evelyn Gama, a self-described “folksy country music lover,” chose a B.B. King song that connected to her childhood and her father who passed away. “Henry,” she said, “will feel his presence when we sing this to him at home.”

Live music is better than recorded music, since it can adapt to the moment, said music therapist Christine Vaskas.

“If we have a baby who is crying, we are following the baby. They are the conductors. We take their lead,” said Vaskas. “If the baby’s heart rate is a little higher, I am looking at the monitor, and I am basing my intervention by matching the rhythm of the heart rate, and we are moving together, in terms of the rhythm, to stabilize the heart rate.”

She uses special devices designed by a famous drum maker, Remo Belli, specifically for NICU music therapy. The Gato Box and Ocean Disc mimic the baby’s heart rate and the sound of amniotic fluid from the womb.

Dr. Lisa Eiland, head of neonatal care at Mount Sinai West Hospital, has embraced this type of intervention. She says anytime you can reduce the stress off the patient, it helps with healing and in the case of premature babies, it can help in development.

“If we have a baby who is crying, we are following the baby. They are the conductors.”

“Music therapy can help feeding procedures. It is stressful when a baby first tries to learn to eat. Anything to help them take the edge off can help them progress at a faster rate.” She also pointed out that not all parents can be there all the time to soothe their babies. Music therapy can help fill that gap and soothe the baby until the parents can be there or until the baby goes home. 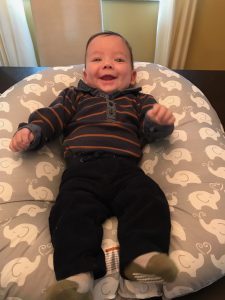 Medical music therapy has also been used for oncology patients. Loewy’s team recently launched a large research project in 13 hospitals for babies that suffer from addiction. Eiland believes this therapy can be used in any medical situation where there is a pattern of high stress on patients in treatment and recovery.

Surprisingly, fewer than 50 NICUs in the United States have music therapists working in any capacity. The annual cost to have the proper full-time staff can reach $100,000. This price tag can make it prohibitive for hospitals.

As for us, I can attest my son benefited from the music therapy, and we still sing him the songs: Cyndi Lauper’s “True Colors” and the Jewish healing prayer “Mi Shebierach.”

Correction: An earlier version of the story incorrectly identified a company that makes the instruments used in the NICU. The company is Remo Belli.

Left: A music therapist plays guitar for babies admitted to the NICU. Photo by Terry Rubin