When someone goes into the hospital for treatment for one condition, but acquires another one they didn’t bargain for — such as a bloodstream infection or a complication from the wrong medication — it’s called an “adverse event.” 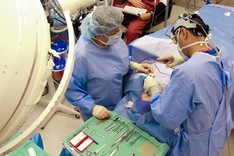 The magnitude of the problem first surfaced in 1999, when the Institute of Medicine released a study that showed as many as 98,000 Americans may die each year from hospital mistakes and another million suffer some kind of injury. Since then, there have been a number of studies on hospital-acquired infections and mistakes which suggest it is a growing phenomenon. But even those who have studied the issue were stunned by the results of a study released Thursday.

Roughly one out of every three people encounter an adverse event when they are admitted to a hospital, according to the study published in the health policy journal Health Affairs.

The study – which was co-authored by Dr. David Classen, a professor at the medical school of the University of Utah – found that about 90 percent of all hospital mistakes go unreported.

Classen and his team used a new method to collect the data, called a Global Trigger Tool. It examined the medical records of 795 patients at three teaching hospitals and found 354 of them had experienced medical mistakes, acquired infections or sustained some kind of injury. The results were ten times higher than what the federal government and hospitals found using an older voluntary method that relied on administrative records from hospitals.

The federal Agency for Healthcare Research and Quality found 35 events when it studied the same patients at those three hospitals. The hospitals themselves found only four.

“Without a doubt, we’ve seen improvements in health care over the past decade, but overall progress has been agonizingly slow,” says Susan Dentzer, editor-in-chief of Health Affairs. (Dentzer reported on the original IOM study for the NewsHour when it was issued in the late 1990s.)

Dr. John Santa, a primary care physician and director of Consumer Reports’ Health Ratings Center, said progress has been slow because the hospitals have “actively opposed public disclosure” of accurate information about hospital mistakes and errors.

“You just cannot rely on doctors and nurses to admit they’ve made mistakes,” Santa said. “The results of this study are disturbing and upsetting. People have a right to think they’re going to get better when they go into the hospital, not worse.”

But the American Hospital Association told the NewsHour that they “are dedicated to improving patient quality and safety.” Thursday’s study, the group said, “offers new insights that hospitals can use for quality improvements.”

Spokeswoman Marie Watteau said that “one adverse event is too many and the goal of hospitals remains the same…zero infections and zero preventable mistakes.”

Dr. Santa was also very critical of past administrations, from both parties, saying they have generally not encouraged public disclosure of data on hospital mistakes.

But he gave credit to Dr. Don Berwick, who heads the Centers for Medicare and Medicaid Services (CMS) for the Obama Administration. Republicans have been very critical of Berwick, but Santa said he’s a “breath of fresh air” when it comes to questions about improving patient safety at hospitals.

In fact, yesterday CMS released information about rates of eight hospital acquired infections and posted them on their website “Hospital Compare.” The press release said the federal government is committed to gathering more accurate data about hospital mistakes so that consumers can make better decisions about where to seek care.