Nike, among other sponsors, cuts ties with pro tennis player Maria Sharapova today, who admitted Monday that she had tested positive for meldonium, a recently banned substance under the World Anti-Doping Agency code.

Swiss watchmaker TAG Heuer and Porsche joined Nike in distancing themselves from the 28-year-old Russian athlete, after she announced failing a drug test at the Australia Open in January.

“We are saddened and surprised by the news about Maria Sharapova,” Nike said in a statement. “We have decided to suspend our relationship with Maria while the investigation continues.” The sportswear company said it will “continue to monitor the situation.” 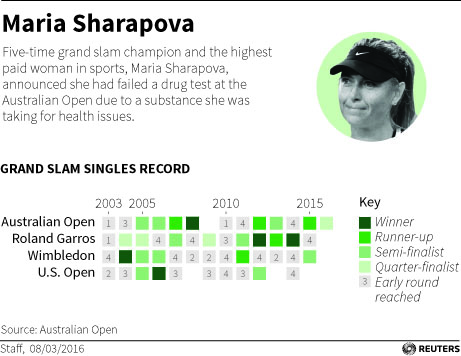 Nike had a working relationship with Sharapova since she was 11 years old, BBC reported.

Additionally, TAG Heuer said it won’t renew its contract with Sharapova, while Porsche said it has “chosen to postpone planned activities” with her, until more details came to light, according to the Associated Press.

Sharapova is a five-time Grand Slam tennis champion with 35 career singles titles to her name, and is generally considered to be among the highest-paid female athletes in the world. Nike is one of Sharapova’s biggest backers, and her total earnings reached $29.7 million in 2015, Forbes reported.

In Monday’s news conference in Los Angeles, Sharapova said she has been taking meldonium for 10 years on doctor’s orders for various health issues. Meldonium is used to treat diabetes and magnesium deficiency, and, as of Jan. 1, was banned by WADA for its performance-enhancing qualities. Sharapova said she failed to open an email about the changes.

“I let my fans down. I let the sport down that I’ve been playing since the age of 4, that I love so deeply,” she said Monday.

Left: Three of Maria Sharapova's sponsors distanced themselves from the tennis star Tuesday after she announced failing a drug test at the Australian Open in January. Photo by Jayne Kamin-Oncea/USA TODAY Sports/Reuters