69 years ago, a president pitches his idea for national health care

This past July 30, we celebrated the 49th anniversary of Medicare and Medicaid. Readers of this column will recall it was on that date in 1965 when President Lyndon Baines Johnson formally signed these two programs into law in Independence, Missouri, as former president Harry S. Truman and his steadfast wife, Bess, looked on with pride. As LBJ handed “Give ‘Em Hell Harry” and Bess the pens he used to affix his signature to the document, the President proclaimed Mr. Truman as “the real daddy of Medicare.” 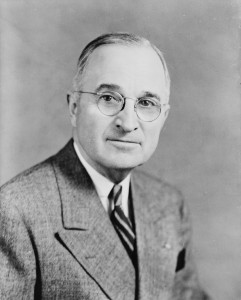 Today marks the reason why LBJ bestowed such presidential credit to Harry Truman.

Back in 1945 — a mere seven months into a presidency he inherited from Franklin D. Roosevelt — Truman proposed a “universal” national health insurance program. In his remarks to Congress, he declared, “Millions of our citizens do not now have a full measure of opportunity to achieve and enjoy good health. Millions do not now have protection or security against the economic effects of sickness. The time has arrived for action to help them attain that opportunity and that protection.”

The first was to address the number and disparity of physicians, nurses and other health professionals, especially in low-income and rural communities where there were “no adequate facilities for the practice of medicine” and “the earning capacity of the people in some communities makes it difficult if not impossible for doctors who practice there to make a living.” To begin to correct this problem, Truman wanted the federal government to construct modern, quality hospital across the nation—especially where they did not yet exist.

The second issue was the need to develop and bolster public health services (both to control the spread of infectious diseases and improve sanitary conditions across the nation) and maternal and child health care. With respect to the latter, Harry Truman reminded Congress, “the health of American children, like their education, should be recognized as a definite public responsibility.”

Third, he sought to increase the nation’s investment in both medical research and medical education.

The fourth problem addressed the high cost of individual medical care. “The principal reason why people do not receive the care they need,” Truman noted, “is that they cannot afford to pay for it on an individual basis at the time they need it. This is true not only for needy persons. It is also true for a large proportion of normally self-supporting persons.”

And fifth, he focused on the lost earnings that inevitably occur when serious illness strikes. “Sickness,” Truman cogently explained, “not only brings doctor bills; it also cuts off income.

Not surprisingly, it was President Truman’s proposal to fix the 4th and 5th problems with a national health insurance plan that provoked the loudest opposition. Truman proposed that every wage earning American pay monthly fees or taxes to cover the cost of all medical expenses in time of illness. The plan also called for a cash balance to be paid to policyholders, in the event of injury or illness, to replace the income those individuals lost.

His measured and careful description of the plan merits quoting:

“Under the plan I suggest, our people would continue to get medical and hospital services just as they do now — on the basis of their own voluntary decisions and choices. Our doctors and hospitals would continue to deal with disease with the same professional freedom as now. There would, however, be this all-important difference: whether or not patients get the services they need would not depend on how much they can afford to pay at the time…None of this is really new. The American people are the most insurance-minded people in the world. They will not be frightened off from health insurance because some people have misnamed it ‘socialized medicine.’ I repeat — what I am recommending is not socialized medicine. Socialized medicine means that all doctors work as employees of government. The American people want no such system. No such system is here proposed.”

The Truman plan was quickly converted into a Social Security expansion bill sponsored by Sens. Robert Wagner (D-NY) and James Murray (D-MT) and Rep. John Dingell Sr. (D-MI). A version of this bill had been proposed in 1943, when FDR was still president, but died in committee both because of the pressures of the war and the lack of presidential pressure on Congress.

At first, things looked somewhat rosy for the reinvigorated 1945 bill: the Democrats still controlled both the House of Representatives and the Senate and a number of prominent Americans vociferously supported it. Still, the nation was weary from war, the high taxes necessary to pay for FDR’s New Deal, and what many Americans perceived to be a too intrusive federal government.

Almost as soon as the reinvigorated bill was announced, the once-powerful American Medical Association (AMA) capitalized on the nation’s paranoia over the threat of Communism and, despite Truman’s assertions to the contrary, attacked the bill as “socialized medicine.” Even more outrageous, the AMA derided the Truman administration as “followers of the Moscow party line.” During congressional hearings in 1946, the AMA proposed its own plan emphasizing private insurance options, which actually represented a political shift from its previous position opposing any third party members in the delivery of health care.

Another historical actor entering the fray was Senator Robert Taft (R-OH), who introduced the Taft-Smith-Ball bill, which called for matching grants to states to subsidize private health insurance for the needy. Although the AMA supported this bill, Truman was against it because he believed it would halt the political progress he had made in guaranteeing every American health insurance.

Hearings and politics continued through 1946 but little progress was made. During the midterm elections of 1946, the Republicans regained control of both the Senate and the House for the first time since 1929, making the bill a dead issue.

Harry Truman continued to make health insurance a major issue of his campaign platform in 1948 and specifically castigated the AMA for calling his plan “un-American”:

“I put it to you, it is un-American to visit the sick, aid the afflicted or comfort the dying? I thought that was simple Christianity.”

Truman famously fooled the pollsters by winning re-election in 1948 and even the Congress was restored to Democratic control that fall. But this political power was no match for the AMA’s redoubled lobbying and advertising efforts, which were endorsed by more than 1,800 national organizations, including the American Bar Association, the American Legion and the American Farm Bureau Federation. Public support waned — and the bill quietly died (again) — as the middle class purchased private health insurance plans, labor unions began collectively bargaining for their members’ health benefits, and the advent of the Korean War.

Truman later called the failure to pass a national health insurance program one of the most bitter and troubling disappointments in his presidency. He must have been overjoyed in 1965 to watch Lyndon Johnson enact a health insurance plan for the elderly and the needy. Nevertheless, the nation would have to wait another 45 years before the passage of the Patient Protection and Affordable Care Act of 2010, a law that remains in jeopardy after Nov. 7, when the U.S. Supreme Court took on still another legal challenge to its constitutionality. That said, many would insist there remains a great more work to do to make health care affordable and accessible for all Americans.