How nurses are fighting the war against sepsis

Dawn Nagel, a nurse at St. Joseph Hospital in Orange, Calif., knew she was going to have a busy day, with more than a dozen patients showing signs of sepsis. They included a 61-year-old mechanic with diabetes. An elderly man recovering from pneumonia. A new mom whose white blood cell count had shot up after she gave birth.

Nagel is among a new breed of nurses devoted to caring for patients with sepsis, a life-threatening condition that occurs when the body’s attempt to fight an infection causes widespread inflammation. She has a clear mission: identify and treat those patients quickly to minimize their chance of death. Nagel administers antibiotics, draws blood for testing, gives fluids and closely monitors her charges — all on a very tight timetable.

“We are the last line of defense,” Nagel said. “We’re here to save lives. If we are not closely monitoring them, they might get sicker and go into organ failure before you know it.”

Sepsis is the leading cause of death in U.S. hospitals, according to Sepsis Alliance, a nationwide advocacy group based in San Diego. More than 1 million people get severe sepsis each year in the U.S, and up to 50 percent of them die from it. It is also one of the most expensive conditions for hospitals to treat, costing $24 billion annually.

Most hospitals in the U.S. have programs aimed at reducing sepsis, but few have designated sepsis nurses and coordinators like St. Joseph’s. That needs to change, said Tom Ahrens, who sits on the advisory board of Sepsis Alliance.

“From a clinical point of view, from a cost point of view, they make a huge impact,” said Ahrens, a research scientist at Barnes-Jewish Hospital in St. Louis. 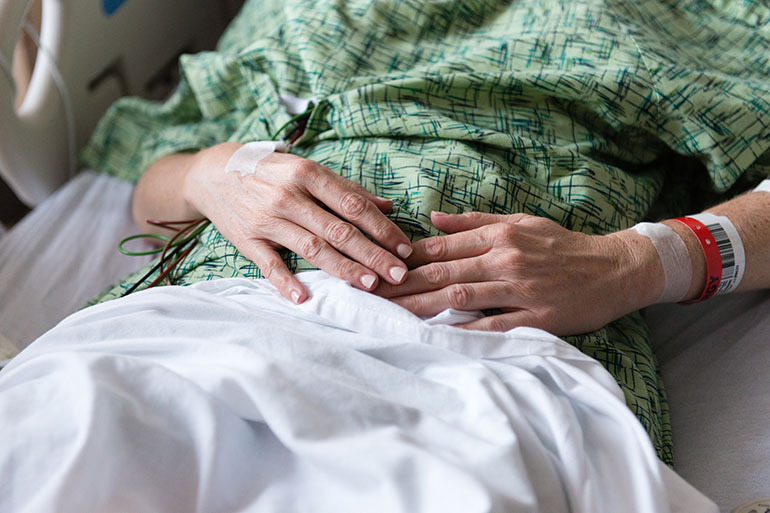 A patient finds out she has sepsis at St. Joseph Hoag Health in Orange County, Calif., on April 27, 2017. Sepsis is a life-threatening condition caused by the body’s response to infection. (Heidi de Marco/KHN)

Recent federal rules could help foster such a change: The Centers for Medicare & Medicaid Services began requiring hospitals in 2015 to measure and report on their sepsis treatment efforts. They must make sure certain steps are completed within the first three hours after sepsis is identified, including getting blood cultures, giving intravenous fluids and starting patients on a broad-spectrum antibiotic.

Sepsis is the leading cause of death in U.S. hospitals … More than 1 million people get severe sepsis each year in the U.S, and up to 50 percent of them die from it. It is also one of the most expensive conditions for hospitals to treat, costing $24 billion annually.

Sepsis is difficult to diagnose, but if it’s caught early enough it can be treated effectively. If not, patients are at risk of septic shock, which can lead to organ failure and death.

St. Joseph Hoag Health, an integrated medical system in Orange County, Calif., that operates St. Joseph and six other hospitals, began employing dedicated sepsis nurses throughout the system in 2015. Hoag Hospital in Newport Beach and its namesake sister facility in Irvine were the first to try out the nurses about seven years ago, and four other hospitals have since followed.

The hospitals in the St. Joseph Hoag Health system treat about 8,000 cases of sepsis each year, at a cost of $130 million, according to Andre Vovan, a critical care physician who oversees St. Joseph Hoag’s anti-sepsis programs.

The health system also created sepsis care checklists and a mobile app to help coordinate care for patients at risk. But the nurses are at the core of the initiative. They know how to treat sepsis like “the back of their hands,” Vovan said. “Their familiarity allows them to do it faster.”

Speed is critical in sepsis: evidence shows that patients who get treatment quickly are more likely to survive. 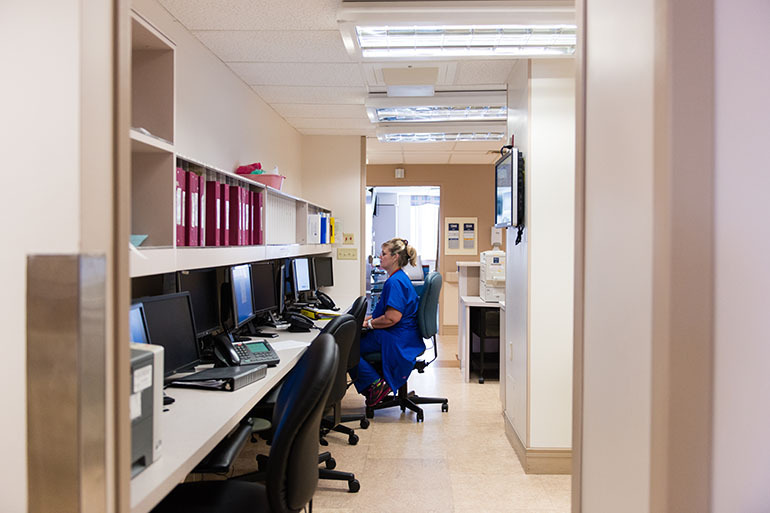 Dawn Nagel, who has worked as a nurse at St. Joseph Hospital in Orange, Calif., for 18 years, as part of the hospital’s sepsis unit since 2015. Nagel tracks patients and starts antibiotics, takes labs, gives fluids and checks on patients, all on a strict timetable to reduce patients’ chances of going into septic shock. (Heidi de Marco/KHN)

“It’s so much easier to give someone salt water and antibiotics. It’s a lot harder when they are in the ICU and you are trying to get them off a ventilator,” said Cecille Lamorena, who is in charge of the sepsis nurses at St. Joseph Hospital.

Sepsis nurses give families an idea of what to expect — both during the patients’ hospital stay and after their discharge, Vovan said.

“We want the families to understand that just because you survive sepsis, it doesn’t mean you can get home and run a marathon,” Vovan said. “It can take weeks to months to recover.”

Sepsis nurses and coordinators also serve as on-site experts to ensure that required standards are followed by others, said Dr. David Carlbom, medical director at Harborview Medical Center in Seattle. The sepsis nurse coordinator there, Rosemary Mitchell Grant, educates staff and tracks data collected through the medical records. She also carries out projects to improve outcomes and helps organize an annual sepsis conference. 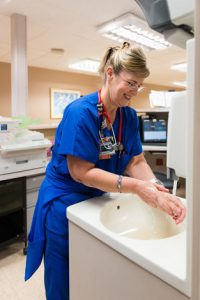 “Hospitals that don’t have a systematic approach could have a delay in recognition of sepsis,” Carlbom said, noting that busy acute care nurses might miss its subtle signs.

The St. Joseph Hoag Health effort seems to be working. From 2015 to 2016, the death rate for all of its hospitals dropped from 15 percent to 12 percent for severe sepsis/shock, and from 12 percent to 9 percent for all sepsis cases, Vovan said. The length of time patients stay in the health system’s hospitals is also dropping, he said. At St. Joseph Hospital in Orange, the number of patients who went into septic shock dropped 50 percent in the same two-year period, Lamorena said.

The sepsis program has support from doctors, including Dr. Matthew Mullarky, an emergency room physician at St. Joseph. He said he relies on the hospital’s sepsis nurses to help find and follow patients who are at risk. “With the knowledge they have, they ensure we are moving in the right direction quickly,” Mullarky said. “These patients are so overwhelmingly sick.”

At the hospitals in the St. Joseph Hoag network, there is always a dedicated sepsis nurse on duty. Dawn Nagel said that at St. Joseph Hospital, where she works, “sometimes I feel there should be three of us.”

Nagel weighs several factors as she tries to identify patients at risk. She scouts for signs they are worsening — a drop in blood pressure, confusion, increased heart rate, a high white-blood-cell count. And since sepsis is a response to infection, she wants to know if there is one. Pneumonia and urinary tract infections are the most common.

Nagel, who has worked as a nurse at St. Joseph for 18 years, seems to know everyone she passes in the halls. She spends the day bouncing between the emergency room, the maternity ward and the medical-surgical floor. She pitches in wherever needed, grabbing a pillow for one patient, starting an IV for another.

She carries a binder with tracking sheets for each patient. All potential sepsis patients are followed for at least 24 hours, during which they get visits from the sepsis nurse. Nagel’s phone rings constantly — nurses and doctors asking if she can check on patients. She also receives alerts on the in-house sepsis app embedded in her phone. When she meets with patients, she hands them a brochure on sepsis and explains more about it. 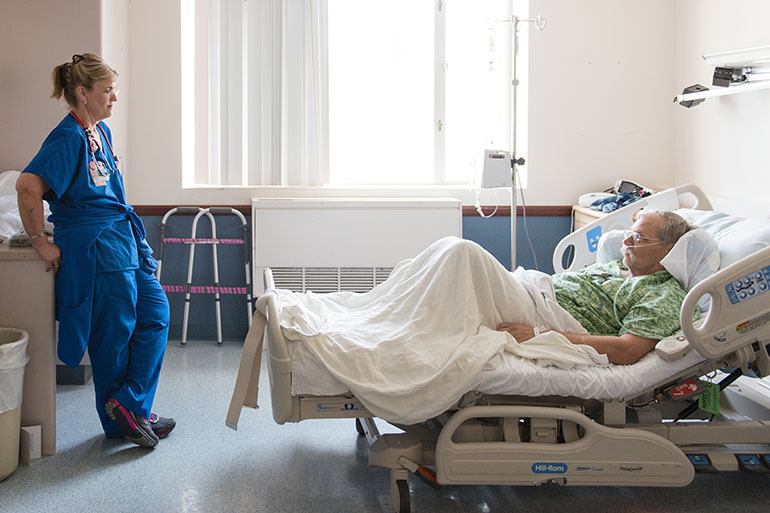 One afternoon in May, Nagel checked up on Donald Hammock, 82. He already was being treated for sepsis with fluids and antibiotics, and Nagel wanted to ensure they were working. “I’m just another set of eyes to make sure you’re getting better, not worse,” she told him. “I’m like your infection babysitter.”

Hammock said he was glad for the extra attention. He had been treated for severe sepsis in 2011 after spiking a fever, and his blood pressure had dropped precipitously. At the time, Hammock said, he didn’t know anything about the illness. “I could have died right there.”

“I’m glad you got in here,” Nagel replied. “As you know, you can get really sick with sepsis.”

After a quick exam, Nagel told Hammock his vitals looked stable, he seemed alert, and his lungs sounded clear. “You are looking good to me,” she said.

She crossed him off her list and headed to the next room.

KHN’s coverage in California is funded in part by Blue Shield of California Foundation.