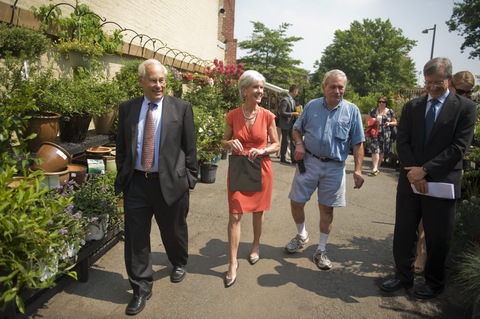 Health and Human Services Secretary Kathleen Sebelius makes her way to a news conference outside of Frager’s Hardware on Capitol Hill to announce “a framework on affordable insurance exchanges” in 2011. Photo by Tom Williams/Roll Call.

The Obama administration on Friday gave states more time to submit plans to set up state-based health insurance exchanges, a concession to the reality that many states had delayed planning until they saw who won the presidential election.

States will have to tell federal regulators that they plan to go ahead by next Friday, but they will have until Dec. 14 to submit plans for state-based, online markets, according to a letter to governors from Health and Human Services Secretary Kathleen Sebelius. Those who want to partner with the federal government to set up on the markets have until Feb. 15.

“This administration is committed to providing significant flexibility for building a marketplace that best meets your state’s needs,” Sebelius wrote.

The exchanges are a key element of the health care law. They are supposed to make it easier to find an affordable plan and to help people in small group and individual insurance market determine if they qualify for new federal subsidies. An estimated 12 million people are expected to get insurance through the exchanges in 2014.

Originally, states had to give federal regulators a plan by Nov. 16 detailing how they would move forward, with enrollment slated to launch next October.

Some experts have raised questions about whether the federal government has the capability to set up and run several dozen markets by January 2014.

Virus adds to fears for targets of Muslim crackdown in China

How to help those in need in Venezuela

Utility to pay $53 million for blasts that damaged homes, killed 1

Congress makes lynching a federal crime, 65 years after Emmett Till