Oct. 15, 1966 marked the day that Ellis Island (along with Liberty Island and the Statue of Liberty) was officially listed on the U.S. National Register of Historic Places.

Noise is resoundingly absent at Ellis Island today. When tourists enter its Great Hall they can still see the large American flag hanging on the northern wall and, across the enormous chamber, the tall clerks’ desks where thousands of passports were stamped daily, each with an echoing and resounding force. The more inquiring visitor may visit rooms off to the side where immigrants suspected of having an illness were subjected to intense medical scrutiny. Those deemed ill were confined to the Contagious Disease hospital, right next door — which after decades of neglect has been recently re-opened to the public. There was even a tiny courtroom where special hearings were held to decide a newcomer’s fate. But so much more is missing from this curated and archived scene: the warren of cage-like fences, the rows and rows of benches filled to capacity with immigrants from all around the globe, and, of course, the clamorous din they produced. 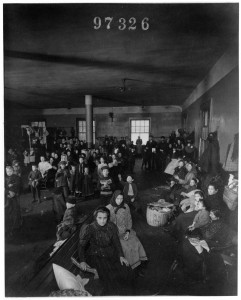 Immigrants in the Waiting Room at Ellis Island, circa 1900.

On October 8, 2014, after the recent death of Thomas Eric Duncan, Ebola’s first casualty on American soil, President Obama and the CDC ordered a series of examinations, questionnaires, and temperature checks for travelers arriving from Sierra Leone, Guinea and Liberia. But if one is tempted to consider these protocols too invasive or arduous, it might serve well to think of the tasks undertaken by their predecessors: the doctors of the U.S. Public Health Service at Ellis Island.

Between 1885 and 1920, approximately 21,000,000 immigrants arrived in America. Roughly 75 percent of them entered through New York Bay and were processed at Ellis Island. When Ellis Island opened its doors in 1892, there were six physicians stationed to inspect the more than 200,000 immigrants who streamed through that year. By 1902, there were eight physicians examining more than 500,000 arrivals; by 1905, 16 doctors examined 900,000 immigrants. In 1916, there were 25 physicians and four inspection lines were running simultaneously. After hearing the details of this complex operation, Dr. Henry M. Hurd, the superintendent of the Johns Hopkins Hospital in Baltimore, worried aloud, “how can a physician inspect 2,000 persons as they should be in a couple of hours, when it sometimes takes a doctor twice that long to diagnose one patient?” 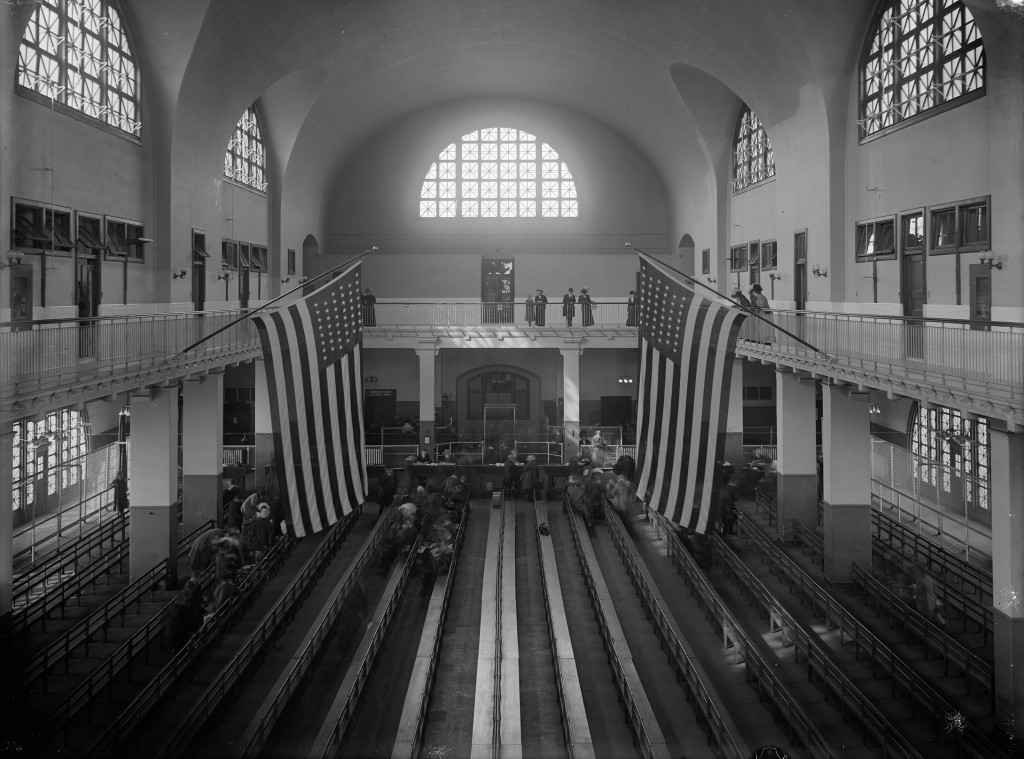 View of the Great Hall of Ellis Island Immigration Station in New York. This was taken sometime between July 4, 1908 and July 3, 1912.

The medical inspection at Ellis Island began soon after the immigrants walked onto the island. After disembarking from the ferry that transported them from the steamships, they were told to carry their bags into the main building and up a long flight of steps. Those who had to stop in the middle of this path, clutching their chests in pain or resting because they were short of breath, were pulled aside to be inspected for evidence of chronic heart disease, such as atherosclerosis or damage from a long-ago bout of rheumatic fever, or lung problems.

This was hardly the end of their endurance test. As the immigrants carried their suitcases and trunks across the Great Hall, another physician was watching them closely to detect abnormalities in posture, muscular weakness, or a lame gait. Afterward, immigrants were instructed to turn at right angles so another physician could inspect both sides of their face for symmetry or defects, and the next for evidence of goiter. At another point, their vision was tested. Elsewhere, a stethoscope was placed on their chests to listen to their hearts and lungs. A sharp-eyed doctor would then inspect their nails, skin and scalp for fungal infections including the stubborn ringworm. Those who appeared “odd” or who could not follow directions (not a rare occasion given relatively few of these travelers spoke fluent or any English) were scrutinized for mental acuity and evidence of “psychopathic” tendencies.

But it was the last examination that was the most feared: the doctor’s inspections of the eyelids and eyes for evidence of trachoma. A chronic infection of the eye, trachoma is now easily treated with a single dose of an antibiotic. Yet in the days before such medical miracles, trachoma was a chronic, scarring, and smoldering ordeal. Three out of four of its victims were left blind. The treatments of the day were brutal, requiring much painful surgery and months of corrosive chemical treatments, offering little guarantee of cure.

A host of “official photographs” documents how some of the doctors used a buttonhook to evert a patient’s eyelids. Others simply used their index fingers. When Theodore Roosevelt visited the French Renaissance, red-bricked facility in 1906, he wrote his secretary of commerce a note of concern over the fact that “the doctors made the examination with dirty hands and no pretense to clean their instruments.” This disgusting practice soon changed after orders were given for frequent hand washing and sterilization of all tools.

Between 1892 and 1924, the percentage of immigrants rejected for a medical condition, including psychiatric, chronic as well as infectious diseases, was miniscule, less than 1 percent. A small number of these immigrants were treated at the Ellis Island; even more were sent back to their native land at the expense of the steamship company that brought them to the New World. Still, every immigrant coming to Ellis Island knew someone, or someone who knew someone, who was sent back because they suffered from this or that disease. And most of all, every immigrant feared the uniformed U.S. Public Health Service doctor whose every word and action had the potential to instantly change their lives for the better or the worse.

Today, five major airports (Kennedy-New York, O’Hare-Chicago, Newark, Hartsfield-Atlanta and Dulles-Washington D.C.) receive 94 percent of all visitors from African nations. CDC quarantine officers are assigned to each of these airports at specially designated quarantine stations. These officers will question all visitors from Sierra Leone, Guinea, and Liberia about their health status and take their temperatures. Based on this information they will decide if further medical inspection is mandated. All of the travelers’ names and final destinations will be recorded in a registry. Those without fevers will be asked to check their temperatures on a daily basis for 21 days and report to a doctor immediately if they develop symptoms consistent with Ebola with a sheet of paper explaining their CDC encounter. Those who are discovered to be ill will be quickly admitted to an appropriate infectious disease-intensive care-isolation unit. Those who are without symptoms but with evidence of contact with someone with Ebola will be closely observed under a modern version of quarantine.

Today, we have far better technology and a modern armamentarium of medical advances to treat this highly deadly disease. So much has changed since those early days at Ellis Island and yet, in a broader sense, so little has, too. We are still battling terrible, deadly epidemics and the fears they unleash.

Dr. Howard Markel writes a monthly column for the PBS NewsHour, highlighting the anniversary of a momentous event that continues to shape modern medicine. He is the director of the Center for the History of Medicine, the George E. Wantz Distinguished Professor of the History of Medicine at the University of Michigan, and editor-in-chief of the Milbank Quarterly.

Left: Doctors operate on a trachoma patient in the operating room at Ellis Island Hospital, circa 1920.