1 in 6 Americans Gets Food Poisoning Every Year, CDC Finds

About one in six Americans — 48 million people — get sick from food poisoning every year, according to a new estimate released Wednesday by the Centers for Disease Control. 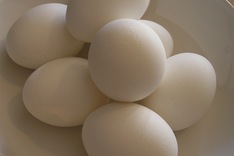 The report marks the first time since 1999 that the CDC has released an estimate of the total number of foodborne illnesses in the U.S. It comes after several years of large recalls — of spinach, peanut butter and other foods — that have put food safety in the headlines, and as Congress is considering a sweeping food safety bill that would expand the Food and Drug Administration’s regulatory power.

“[Foodborne illness] remains a substantial public health problem,” says Christopher Braden, the director of CDC’s Division of Foodborne, Waterborne and Environmental Diseases. “A lot more work needs to be done […] these new estimates will serve as a foundation for work on food safety policies.”

At first glance, the new estimate might suggest that food is becoming safer. In 1999, the agency estimated that 76 million Americans got sick and 5,000 died from tainted food each year. The new report found that 48 million people get sick and 3,000 die each year.

But federal officials say that the new estimate can’t be taken to mean that there are many fewer cases of food poisoning now than there were 11 years ago. Instead, they say, it is a more accurate measurement and reflects the fact that researchers now have more data to work with, as well as better methods of identifying foodborne illness.

“We really can’t compare the two estimates to measure trends, as tempting as that may be,” Braden says.

The researchers used a combination of reports from hospitals, death certificates and data from the CDC’s surveillance networks and population surveys to come up with the estimate.

They found that about 20 percent of the foodborne illness cases in the U.S. come from “known pathogens” like Salmonella, E. coli, norovirus and listeria. The other 80 percent come from “unspecified agents” — pathogens or other causes that scientists haven’t been able to identify.

The new estimate only looked at the amount and type of foodborne illness — it did not address which types of foods were contaminated or how they got that way. Braden says that those analyses are taking place right now.

Food safety advocates said that the new data highlight the need to reform the U.S. food safety system. “It is clearly an unacceptable burden of illness for the public,” says Caroline Smith DeWaal, the director of the food safety program at the Center for Science in the Public Interest, a consumer advocacy group that supports the food safety bill. She adds, “these numbers shouldn’t give anybody increased confidence that the food they’re eating is safer.”