One ‘superbug’ victim is fighting for his life

One of the seven patients infected with the UCLA “superbug” is in grave danger, according to his lawyer. 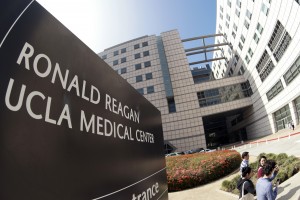 UCLA Medical Center in Los Angeles has told scores of patients they were possibly exposed to a drug-resistant bacterial “superbug” during endoscopy procedures that infected seven patients and may have contributed to two deaths. Photo by Jonathan Alcorn/Reuters

According to the AP, the 18-year-old student was infected with the suberbug when doctors used an endoscope to examine his pancreas for a procedure at Ronald Reagan UCLA Medical Center. The endoscope was contaminated with carbapenem-resistant Enterobacteriaceae (CRE) — a possibly lethal, antibiotic-resistant bacteria — and was also found on another endoscope. The two medical instruments had been used for similar procedures to the 18-year-old’s between October and January, exposing the bacteria to more than 170 people. So far, at least seven people, including the 18-year-old student, have been infected and two of those seven have died.

The young man spent 83 days in the hospital and was released, but recently relapsed.

The type of endoscope is known to be difficult to fully clean. UCLA has since incorporated stronger sterilizing systems and removed the contaminated endoscopes. Ronald Reagan UCLA Medical Center’s chief medical and quality officer Dr. Robert Cherry said the hospital followed the endoscope manufacturer’s rules for cleaning the product, but the intricate design and parts make fully sterilizing the endoscope difficult. Other areas in the U.S. have seen similar infections from the medical instrument.

The FDA is working to find ways to prevent infections from the product, but has also said that removing the product entirely would hurt the millions of patients who benefit from these procedures.