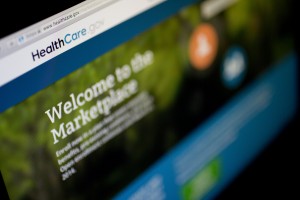 About 4.2 million Americans have enrolled in private health plans through the end of February via the online insurance marketplaces established by the federal health law — with enrollment jumping by nearly 1 million people last month, the Obama administration said Tuesday.

She said 83 percent of enrollees received subsidies to lower their monthly premiums.

But the number of young adults signing up over the last five months continues to lag expectations, which could impact insurance premiums next year. Insurance industry officials have been closely watching the mix of customers to make sure they get enough healthy people to balance the cost of covering older Americans who generally require more medical care.

About 25 percent of people signing up for coverage through February were between the ages of 18 and 34 in the 36 states served by the federal marketplace— the same percentage as in the January enrollment report, officials said. That compares to a benchmark of 40 percent on which insurers based their premiums for policies sold in the exchanges this year.

Obamacare supporters are counting on a huge spurt in sign-ups this month before open enrollment for 2014 closes in three weeks on March 31. Both the president and first lady are doing interviews on television and radio, and ads targeted to young people are running on popular television shows.

The marketplaces — a centerpiece of the Affordable Care Act —were created so that Americans unable to get coverage through their jobs could select among plans that offer a basic set of benefits. Americans making up to four times the federal poverty level, or $46,000 for an individual, qualify for government subsidies to offset the cost of their premiums.

After a disastrous start in October due to malfunctioning websites, the nonpartisan Congressional Budget Office revised downward its expectations on how many would enroll in the first year. Instead of 7 million, CBO now expects 6 million.

The administration had announced passing the 4 million enrollment mark about two weeks ago but did not break out the figures.

The percentage of people between 18 and 34 enrolling ranged from 18 percent in West Virginia, to 31 percent in Utah, to 45 percent in the District of Columbia. The variation reflects states’ demographics, among other things, federal officials said.

An additional 4.4 million people have been deemed eligible for Medicaid, according to the report. There is no deadline on when people can enroll in the state-federal health insurance program for the poor.

In addition, more than 544,000 people have purchased standalone dental plans in the federal marketplace, the report said. Dental enrollment figures were not available for the state marketplaces.

Enrollment data from individual states are available on the HHS website.