Overdose deaths hit a historic high in 2020. Frustrated experts say these strategies could save lives

As evidence-based drug treatment and interventions became increasingly difficult to obtain during the first year of the COVID-19 pandemic, fatal overdoses in the United States skyrocketed to their highest level ever. While the Biden administration has said it will broaden access to harm reduction and treatment, experts say the money that has been set aside isn’t doing enough to slow the rising pace of overdose deaths in this country.

U.S. policies have long skewed toward punishing people struggling with substance use rather than looking for ways to treat them – a strategy that has not been enough to prevent dramatic loss of life. Compared to decades of punitive policy, greater understanding has emerged among lawmakers and the public in recent years, but action at the federal level hasn’t fully caught up.

The American Rescue Plan Act, signed into law on March 11, 2021, earmarked nearly $4 billion to boost mental health and substance use disorder programs, including some money set aside specifically to address the opioid crisis.

In December, two additional initiatives were announced: $30 million in grants from the he Substance Abuse and Mental Health Services Administration (distributing $10 million a year for the next three years) to communities to develop and deploy innovative programs built around harm reduction; and model legislation from the Office of National Drug Control Policy released Dec. 8 that state lawmakers could pass to make naloxone available over the counter, buy fentanyl test strips and expand syringe exchange services. 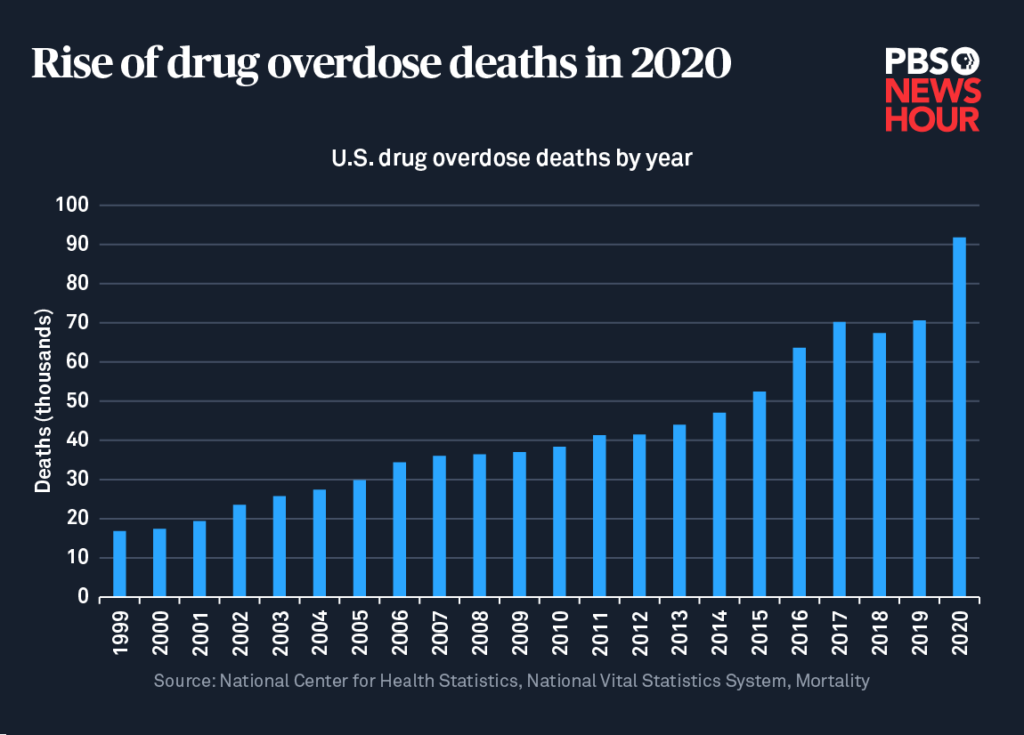 While promising steps, experts say these new harm reduction programs will be distributed over multiple years and take that much longer to reach their full benefit in communities desperate for help right now. They also do not address all of the need nor make up for more than a year of pandemic supply and access issues when it comes to lifesaving treatments and support, the experts said.

These challenges, and the latest mortality numbers, have shocked and discouraged experts who felt hopeful the nation may have found a solid path forward when overdose deaths dipped slightly in 2018.

Instead, during the pandemic, hundreds of people are fatally overdosing daily, and the stakes remain tragically high.

From April 2020 to April 2021, more than 100,000 people in the United States fatally overdosed on drugs – the single highest recorded death toll during a 12-month period. In the 2020 calendar year, nearly 92,000 people died, and the rate of fatal drug overdoses accelerated by 31 percent compared to the previous year, according to recent data from the National Center for Health Statistics within the Centers for Disease Control and Prevention. All groups age 15 and older experienced a rise in this grim statistic, and synthetic opioids, particularly fentanyl, played a bigger role in ushering in these untimely deaths. Death records (typically filled out by medical examiners and coroners already overwhelmed by the coronavirus pandemic) likely undercount the true toll. In addition to the cost in lives, the economic toll of the opioid crisis was estimated at $631 billion between 2015 and 2018, according to a 2019 study from the Society of Actuaries.

“We’re failing at prevention and treatment,” said Dr. Andrew Kolodny, who serves as the medical director of opioid policy research at Brandeis’ Heller School for Social Policy and Management.

When the nation entered lockdown in early 2020, many people were unable to reach treatment centers in their communities and access to medication-assisted treatment was cut off. Telemedicine and take-home treatment were options for some, but that still left huge holes in care infrastructure. Meanwhile, naloxone — the life-saving antidote that can reverse opioid overdose — often has been unevenly available to people, especially depending on ZIP code, according to Gupta.

The “staggering” losses of more than 100,000 people indict “failed policies,” said Dr. Sarah Wakeman, who directs the Substance Use Disorder Initiative at Massachusetts General Hospital and is a professor at Harvard Medical School. Those policies, Wakeman said, often are rooted in a “misunderstanding of how to think about drug use and addiction.”

The crisis is also a matter of “compounded problems,” said Dr. Leana Wen, Baltimore’s former public health commissioner. ​​For years, public health departments have been underfunded and “already extremely strained,” she said. When the coronavirus emerged, the same people struggling to address the opioid epidemic were then diverted to contact trace cases and set up mass vaccination sites. Too many massive issues – each monumental on their own – quickly dried up the shallow well of available reserves. Then, fentanyl fueled even more overdose deaths, and these languishing public health crises succeeded in “getting much worse.” Wen said that, together, each lost life serves as proof that too few resources have been devoted to treating people’s needs.

For decades, anti-drug policies attacked the supply side of the equation, Wakeman said. They made it more difficult for people to access drugs and punished people who turned to drugs by cutting off access to their housing, children and other stabilizing forces in their lives.

But those approaches have missed the mark, Wakeman said: “The fundamental, defining hallmark of addiction is compulsively using a substance despite bad things happening to you.”

Last Wednesday, Krista Machado helped a colleague carry a box of naloxone kits down a flight of stairs at Developing Caring Communities Committed to Action, or DCCCA, in Lawrence, Kansas. On that day, her organization was mailing 240 kits to Kansans across the state – mostly law enforcement officers and civilians who had asked for the antidote. Each month, her organization ships nearly 900 kits within Kansas, she said.

These naloxone kits are urgently needed, especially after 2020, which “marked the highest number of drug overdose deaths ever in our state.” Data suggests 477 Kansans fatally overdosed that year, Machado said, up from 393 a year earlier. And in 2021, Machado suspects fentanyl drove these tragic deaths up even higher.

With demand up, Machado projected that their supply of naloxone kits – budgeted to last until September – could run out by April. And reports suggest the price of the antidote itself is rising when it is needed most. The Biden administration’s funds would offer much needed help not only to her organization, but also the people who she serves, Machado said. They need more kits – ideally filled with 8 mg doses that are double what has been conventionally offered. Increasingly, fentanyl’s potency at times requires multiple naloxone doses to revive a person who has overdosed, Machado said.

Her work also requires raising community awareness about what is needed to help people struggling with substance use. Even fentanyl test strips, which the Biden administration and other harm reduction specialists have touted as life-saving tools, are considered drug paraphernalia in Kansas, Machado said.

“I hope this further draws attention to harm reduction,” she said. “It’s still stigmatized in Kansas. Naloxone is pretty much accepted, but it’s been a big battle the last few years.”

In some communities it’s difficult to access medication-assisted treatment, such as buprenorphine, because of cumbersome, if not overly aggressive, federal drug enforcement policies that scare some pharmacists from offering the medication in the first place, Kolodny said.

“They are the hardest medications to prescribe,” she said.

These grassroots struggles – to keep people alive long enough to support them when they are ready to get help – highlight how complicated the conversation around the nation’s response to substance use disorder has become. 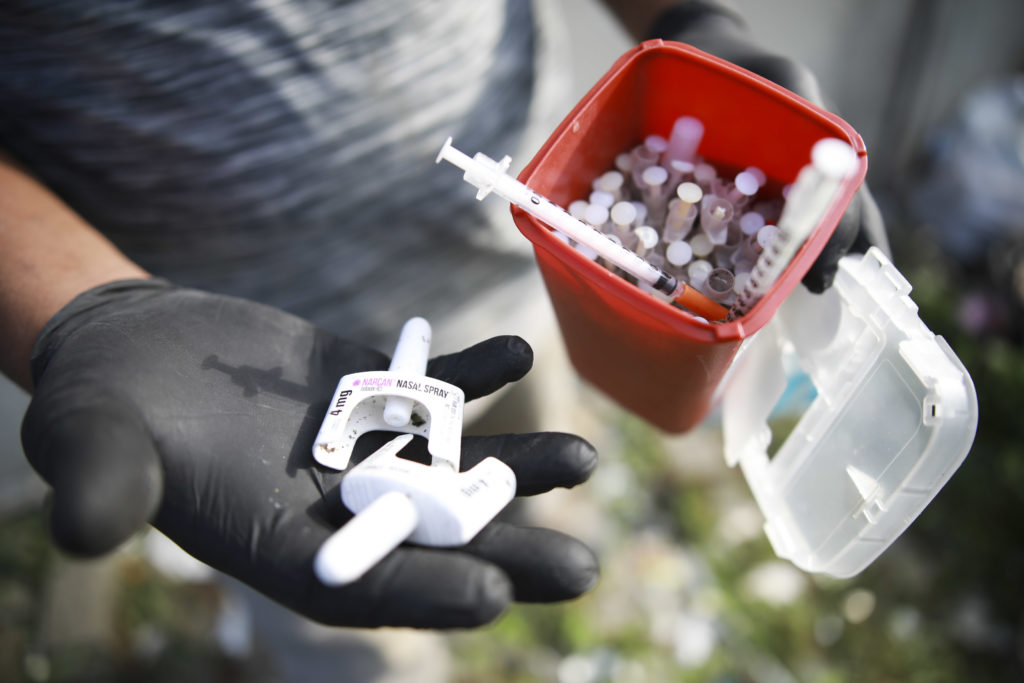 Domingas DaRosa shows the discarded needles and Narcan he picks up as he cleans up needles in the Southampton Street and Melnea Cass Blvd area in Boston, Massachusetts. Photo by Nicolaus Czarnecki/MediaNews Group/Boston Herald via Getty Images

When naloxone is not enough

In 2017, during the Trump administration, the Presidential Commission on Combatting Drug Addiction and the Opioid Crisis issued 56 recommendations for how the country should respond, including ramping up research on alternative pain management therapies and improving coordination across federal agencies to make the most of finite resources in targeting the opioid crisis. But “We never saw a real plan for addressing the problem,” Kolodny said, despite billions in financial commitments and talk from Trump.

Dr. Bertha Madras, who sat on Trump’s commission and regards their 2017 report as “sound” and “evidence-based,” the newest overdose numbers lay bare that more must be done. She says emphasizing the need for harm reduction above all else ignores individuals who sell illicit drugs and make money off of the suffering of others.

The Biden administration’s steps have “been long overdue,” said Wen, who now serves on the advisory board for Behavioral Health Group, a national network of outpatient opioid treatment and recovery centers. In 2015, she wrote a blanket prescription for every person in Baltimore to slow down overdose deaths and reduce suffering in the city. In three years, the program prevented nearly 3,000 people from overdosing. She also launched pop-up clinics where people could learn how to administer naloxone. Nationwide, 33,000 people fatally overdosed that year – a third of the deaths observed in the 2020-2021 data.

Wen blames the heightened loss of life on the already limited public health resources being diverted to meet the relentless demands of COVID-19 testing and contact tracing.

The pandemic also revealed that naloxone is not enough to save every life, Kolodny said. When people are overdosing in isolation, there may be no one to help them when they need immediate help. Supervised injection sites, such as the first two of their kind in New York City, form one strategy designed to reduce these deaths, but have been criticized for enabling drug use.

Some lawmakers and public health experts say they want to create “a system where we make it really, really easy for people to come into care and get the most effective treatment available,” much like was attempted with the COVID-19 pandemic. And yet, Wakeman said, “high barriers” separate people from needed services and too often make the difference between life and preventable death.

“We should be dropping every barrier possible,” she said.

Why are tens of thousands of people dying each year? The U.S. fails to make more meaningful progress due to the combined influence of “entrenched fixed interests, trade guilds, burdensome regulations, entrepreneurial charlatans, and, of greatest concern, historical inertia,” along with stigma, Dr. Arthur Robin Williams wrote in the journal Health Affairs in December. To make more headway, Williams, a research scientist who studies and teaches clinical psychiatry and substance use disorders at Columbia University, argued that the U.S. needs to make treatment “more affordable than drugs” and the culture must pivot away from flawed tactics rooted in “good intentions, tough love approaches, and religious convictions” that do not help and instead embrace evidence-based practices.

Harm reduction and an expanding access to treatment may sound to some like bold action, but Wen said it’s what the U.S. should have been doing all along and must pursue if the nation genuinely wants to figure out answers to this “solvable problem.”

“We know what works,” Wen told the NewsHour.“The question is, do we have the political will to do it.”

Do safe drug consumption sites save lives? Here’s what we know about NYC’s new venture