Every first lady takes on a mission during her time in the White House, and Michelle Obama this week said that hers would be childhood obesity with the program “Let’s Move.”

The goal is to help improve the health of the next generation of American adults and to address certain healthcare costs. But a look at adult obesity rates across Patchwork Nation reveals a few other things.

First, children looking to eat healthy foods may not find very good role models in their parents. And second, there are some differences in obesity rates that align with education and income levels. 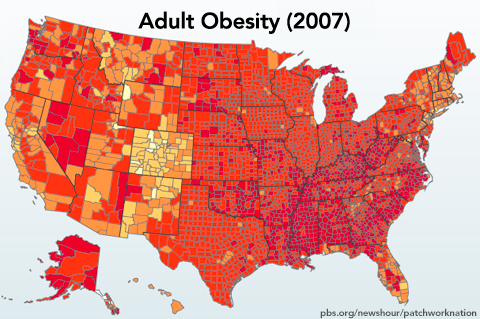 On the whole, though, the data we’ve analyzed, which is from the Centers for Disease Control and Prevention, show just how widespread a problem obesity is in America.

Where the problem is greatest

The 12 community types that we’ve identified in Patchwork Nation have great differences. Some are racially diverse, and some aren’t. Some are relatively poor, while others are upper-middle-class.

In every one of our community types, however, about one-quarter of the population, or more, is technically “obese.”

Obesity here is defined as having a body mass index, or BMI, of more than 30. That can be a tricky scale, since overly muscular people can easily have a BMI higher than 30. But few people believe that a sudden breakout of Jack Lalanne-esque fitness is behind these numbers.

In our analysis of the obesity numbers, two community types stand out: the “Minority Central” counties (which have large African-American populations) and the socially conservative “Evangelical Epicenters.” Those places have the lowest median household income of the 12 community types – both under $32,000. They both also have higher-than-average poverty rates, and they have the fewest number of bookstores per capita, possibly because of lower levels of educational attainment.

These factors are connected, and they outline the difficulties in turning the tide of obesity.

Healthy foods, like the vegetables in the White House garden, tend to cost more at the store than junk food, and these community types are less able to afford them. To counter this, the Let’s Move program is to include $400 million annually to bring grocery stores to poorer areas and offer incentives for convenience stores to carry healthier options.

In our travels, we have found that some communities have fewer healthy restaurant options than others – and the choices are especially tough in “Minority Central” and “Evangelical Epicenter” communities.

Whole Foods won’t save you

But before those in relatively low-obesity areas start feeling too superior, consider this: Even with the increased “healthy food” options that these places have, the obesity rates there aren’t exactly low.

The vast majority of America’s Whole Foods Markets, the well-known purveyor of organic foods, are located in the wealthy “Monied’ Burbs” and the big-city “Industrial Metropolis.” But more than a quarter of the people in these community types can be classified as obese.

In the West, the “Mormon Outpost” counties, with nary a Whole Foods to be seen, are actually just slightly lower in their obesity rate.

The meaning? The obesity problem is about more than simply making healthier foods available. It’s about changing a cultural bias that is present in all 12 of Patchwork Nation’s community types.

In other words, Mrs. Obama’s Let’s Move program is needed. But it also has its work cut out for it.