Most Americans think the opioid crisis has worsened in their communities and across the country, but few believe their own lives will be affected, according to a new poll from the PBS NewsHour and Marist Poll.

Nearly two-thirds of U.S. adults said the opioid crisis worsened nationwide over the past year, an opinion Democrats were more likely to express than Republicans. Another quarter of Americans — 26 percent — said the rates of opioid addiction remained unchanged. Only 2 percent of adults nationwide said the country’s opioid problem improved over the last year.

“There’s quite a gap between people’s awareness of this being a problem and the sense that someone’s actually stepping up to the plate and addressing it.”

The majority’s opinion reflects the latest government data from the Centers for Disease Control and Prevention, which suggested as many as 64,000 Americans fatally overdosed on drugs in 2016. Fentanyl is fueling the rise. In three years, this synthetic opioid went from contributing to 3,000 overdose deaths to more than 20,000 deaths nationwide, according to the New York Times analysis.

“There’s quite a gap between people’s awareness of this being a problem and the sense that someone’s actually stepping up to the plate and addressing it,” said Lee Miringoff, the director for the Marist Institute for Public Opinion.

READ MORE: Saving the babies of the opioid epidemic 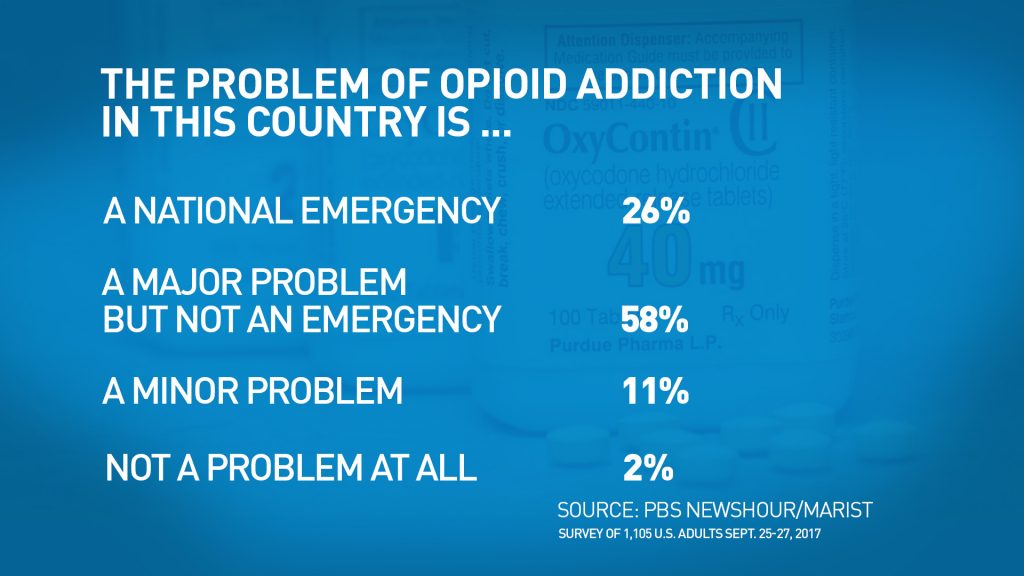 What will help? Americans tend to think keeping track of how often doctors prescribe opioid painkillers would be the most effective strategy in fighting medication misuse that could spiral into addiction. More than a third of U.S. adults — 37 percent — said this approach would be most helpful in stemming opioid addiction to pain medication. All 50 states have prescription drug monitoring programs in place, including Missouri, which approved the program in July.

Another one-fifth of Americans said limiting each individual’s pain drug prescriptions would be the best approach, an idea that gained traction after the pharmacy chain CVS announced on Sept. 22 that it would no longer fill opioid prescriptions for more than seven days. And 17 percent of Americans said a more rigorous government approval process would help. Another 8 percent of U.S. adults supported warning labels that describe the risk associated with taking prescription opioids. A small segment of support — 6 percent — thought improving border security could stop prescription opioid use from worsening.

READ MORE: Column: How to talk to your kids about opioids

Who is responsible? Whatever the solution, Americans don’t think the nation’s leaders are doing enough to combat the opioid crisis. Six out of 10 U.S. adults said Trump has not done enough. The question also split Americans along party lines: 85 percent of Democrats and half of people who identify as politically independent thought the president hadn’t done enough, while a third of Republicans — 36 percent — said the same.

But Americans’ view of Congress made Trump’s performance look good by comparison. Nearly three-quarters of Americans said their elected officials on Capitol Hill have not done enough to address the issue of opioid addiction. Federal health and drug agencies, such as the Department of Health and Human Services and the Food and Drug Administration, did not fare much better, with seven out of 10 Americans saying these agencies also haven’t done enough.

After the latest Republican effort to repeal the Affordable Care Act failed, a third of Americans said their top priority in health care reform was that lawmakers ensure that opioid addiction treatment remains accessible. Half of U.S. adults said such treatment was important, but not their first priority. Only 13 percent said such treatment wasn’t important enough for lawmakers to include in health care reform.

Nine out of 10 U.S. adults — 93 percent — said they do not worry much, if at all, about becoming addicted to prescription pain medication.

More broadly, half of Americans — 53 percent — said a person who struggles with prescription opioid addiction suffers from an illness, while a third of U.S. adults said that person’s addiction reveals personal weakness.

In terms of confronting the crisis, nearly half of Americans — 47 percent — said the medical and mental health community is most responsible for helping the country overcome opioids, while another 29 percent placed that burden on the pharmaceutical industry and an additional 12 percent said law enforcement needed to step up.

Within government, more than one-third of Americans said federal officials must step up to assist the nation, followed by 28 percent who said state governments need to lead the way and another 21 percent who preferred that local officials take action against addiction.

The nation’s outlook for the opioid crisis is pessimistic. Four out of 10 Americans foresee no difference in the level of addiction to pain medication a year from now, while another third of U.S. adults only see things getting worse. A fifth of the country said things will improve with time. But do Americans personally view the opioid crisis as a threat? Overwhelmingly not. Nine out of 10 U.S. adults — 93 percent — said they do not worry much, if at all, about becoming addicted to prescription pain medication.