Just days before the health law’s marketplaces reopened, nearly a quarter of uninsured said they expect to remain without coverage because they did not think it would be affordable, according to a poll released Friday.

That was by far the most common reason given by people who expect to stay uninsured next year, according to the latest tracking poll by the Kaiser Family Foundation. (KHN is an editorially independent program of the foundation.) Forty-one percent of individuals without health insurance said they expected they would remain uninsured, while about half said they plan to get coverage in the coming months.

The law includes subsidies to reduce premium costs and cost-sharing assistance for those who qualify, although it was not clear if the uninsured knew that. 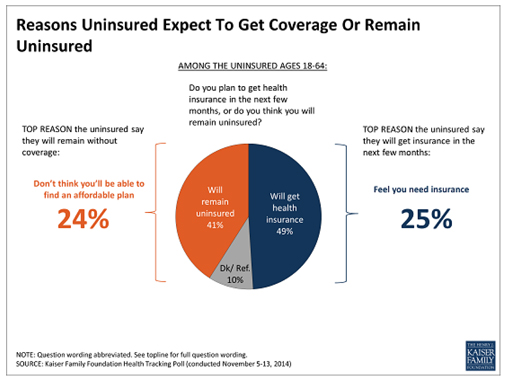 Despite heavy news coverage and marketing from insurers about the re-opening of enrollment, about 9 in 10 of the uninsured said they didn’t know when the health law’s open enrollment period began (Nov. 15). That was similar to the findings in last month’s Kaiser poll.

More than 8 in 10 of the uninsured said it is at least somewhat important to them to have health insurance, with 62 percent saying it’s very important. Seven in 10 said health insurance is something they need.

Other findings in Kaiser’s November poll include that most of the public reports their families have not been directly impacted by the health law, with more (24 percent) saying they have been hurt than helped (16 percent).

With the midterm elections giving Republicans control of the Senate and increasing the party’s majority in the House of Representatives, Americans were divided about whether the debate between the two parties over the health law would increase, the poll found. Forty-seven percent expected it, while 42 percent predicted it would stay at about the same level.

There’s a variety of opinion about what Congress should do next with the health law. Twenty-nine percent of the public supports the law’s repeal, 17 percent favors scaling the law back, 20 percent wants the law to move ahead as is, while 22 percent chooses expanding the law.