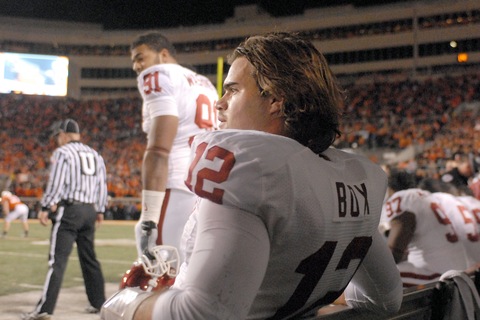 Linebacker Austin Box of the Oklahoma Sooners takes a break during a game in 2010. Box died of an accidental prescription drug overdose the following year.

Austin Box “gutted through” pain. Even after a bad blow to his back that ruptured a disc, the linebacker for the University of Oklahoma Sooners played through the pain that lingered after rehab.

He was upbeat, alert and seemingly at the top of his physical game on a three-day trip to St. Louis with his father in 2011. But the day after they returned, Austin was found unconscious in a friend’s home. He died after being taken to the hospital, at age 22.

The toxicology report showed five different pain medications and an anti-anxiety drug in Austin’s system — a cocktail that ended up stopping his heart.

In the months that followed, Craig Box, Austin’s father, couldn’t help thinking back over their trip to St. Louis for signs of an addiction. “I saw nothing that gave me any indication that this was an issue,” he said — no sign that his “all-American” son was about to become part of an increasingly American statistic.

Overdose deaths from prescription painkillers have quadrupled nationwide in recent years, rising from 4,030 deaths in 1999 to 16,651 in 2010. According to Dr. Thomas Frieden, director of the Centers for Disease Control and Prevention, 125,000 lives were lost in the last 10 years to legal drugs like Vicodin, OxyContin and methadone.

In fact, deaths from prescription painkillers, or “opioids,” as they’re also known, now outpaces those attributed to heroin and cocaine combined.

But the problem runs deeper still. For every overdose death from prescription painkillers, the CDC estimates there are:

How did America’s drug problem shift from the streets to the medicine cabinet so quickly?

On Tuesday’s PBS NewsHour broadcast, health correspondent Betty Ann Bowser travels to Oklahoma — the No. 1 state for prescription painkiller abuse — to talk with the Box family about how Austin may have become hooked on prescription drugs and how he was able to hide the addiction from his family. She also sits down with the CDC’s Frieden to hear more about the scope of the problem nationwide and what might be done about it.

In the meantime, the CDC has compiled a list of 10 things you should know about prescription drug abuse. Questions? Leave them in the comments section below, and a CDC official will try to answer them on the NewsHour’s website in the days ahead.

Top 10 You Should Know About Prescription Drug Abuse, According to the CDC

2. Enough painkillers were prescribed in 2010 to medicate each American adult every four hours for one month.

The amount of painkillers being prescribed is growing significantly. In fact, the quantity of prescription painkillers sold to pharmacies, hospitals, and doctors offices was four times higher in 2010 than in 1999.

3. Deaths from prescription painkillers have reached epidemic levels in the past decade.

4. Roughly one in 20 people in the US reported using prescription painkillers for non-medical reasons in the past year.

Steps you can take include the following:

6. The prescription drug overdose epidemic can be stopped through effective public health interventions.

In addition to the things you can do at home to keep yourself and your family safe, there are also community and state-wide strategies that help prevent prescription painkiller overdoses. These include programs and policies used by health care providers, insurers, and states. Learn more about public health interventions.

These programs can help stop this epidemic, improve the coordination of care for patients, and ensure appropriate care for high-risk patients. Find out more about PDMPS and PRR program.

9. States and communities can enhance access to substance abuse treatment.

10. Health care providers should use evidence-based clinical guidelines and practices to promote safe and effective use of prescription painkillers.

The following guidelines can help:

Do you have questions about prescription drugs? Leave them in the comments section below, email them to us onlinehealth@newshour.org or send us a tweet @jasokane. A CDC official will try to answer your questions on the PBS NewsHour website in the days ahead.