How Medicare came to be, thanks to Harry S. Truman

Forty-nine years ago, President Lyndon B. Johnson found himself in Independence, Missouri. Although he was surrounded by a gaggle of politicians, distinguished guests and Secret Service agents, the president was armed only with a fountain pen, a bottle of ink and a sheath of papers. Seated directly beside him, so as to accommodate the newspaper photographers and the television cameras, was Independence’s favorite son, the 33rd president of the United States, Harry S. Truman.

LBJ had traveled to the “Show-Me-State” to sign the Medicare Act of 1965 into law and to praise the 81-year-old Truman who, as Johnson drawled in his thick Texas accent, was “the real daddy of Medicare.”

Designed to provide health insurance for Americans aged 65 and older as well as younger citizens with specific medical conditions or disabilities, Medicare was originally divided into two categories prosaically named “Part A” and “Part B.”

Part A covered hospitalization with payroll taxes and Part B was an optional health insurance program requiring a monthly premium to cover specific outpatient services, medical tests and equipment, among other things. Back in 1965, the payroll deduction for Part A was about $40 per year and Part B cost only $3 a month! 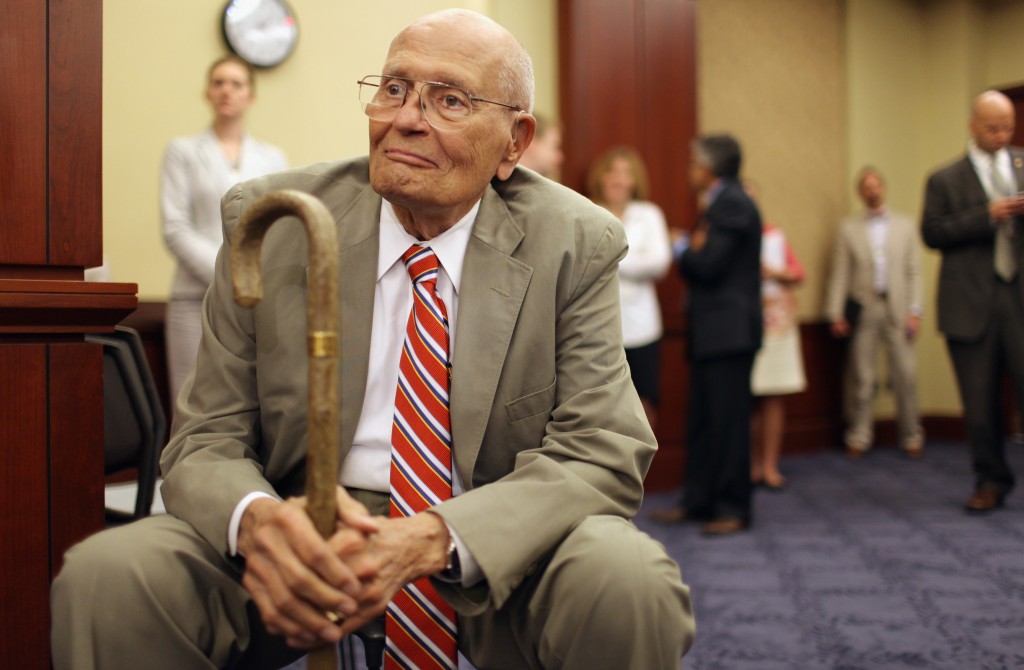 U.S. Rep. John Dingell (D-MI) participated in a rally to mark the 46th anniversary of the passage of Medicare at the U.S. Capitol on July 27, 2011. The longest currently-serving member of Congress, Dingell wielded the gavel during that historic session of the House of Representatives in 1965. Photo by Chip Somodevilla/Getty Images

President Johnson was hardly stretching the truth by honoring President Truman at the signing ceremony. During his administration, President Truman called for the institution of a federally funded health insurance program in 1945 and again in 1947 and 1949. Each presidential plea, however, was thwarted or ignored by the U.S. Congress, aided and abetted by powerful medical lobbies such as the American Medical Association and the American Hospital Association, which denigrated such efforts as a descent into “socialized medicine.” Harry Truman’s devotion to this cause was, in a sense, a means of honoring his former boss, Franklin D. Roosevelt who, for political reasons, was forced to remove an extensive health benefit plan from what became the Social Security Act of 1935. Parenthetically, another Roosevelt — Theodore Roosevelt — included a government-backed health plan on the platform of his failed presidential run in 1912 on the Progressive (“Bull Moose”) ticket.

There was some movement towards developing a national health care program during the Eisenhower years and even more so during John F. Kennedy’s far too brief presidency. But it was the powerful and politically savvy LBJ and the Democrats’ landslide victory in 1964 giving them control of both houses of the U.S. Congress that pushed Medicare across the federal finish line.

Today, Medicare is much more complicated and expensive as it funds a medical-industrial complex featuring a great many medical miracles that could only be imagined in 1965 as well as a great deal of spending that requires scrutiny, better evidence of efficacy and, ultimately, reduction. Part C (or Medicare Advantage) was instituted during the Clinton administration in 1997 to allow beneficiaries to choose a health maintenance program (HMO) instead of traditional fee for service. In 2003, George W. Bush signed Medicare Part D into law, which asks beneficiaries to pay an additional premium in order to receive prescription drug benefits. The passage of the Patient Protection and Affordable Care Act of 2010, during the Obama administration, allows for Medicare beneficiaries to receive a wide menu of preventive health care services and health screens and seeks to reduce the out-of-pocket expenses of Part D beneficiaries.

Today, more than 49 million Americans enjoy the benefits of Medicare; by 2030, experts estimate that number will balloon to 70 million. Health economists project a cost of more than $1 trillion a year to fund Medicare by 2022, thanks to the increase in the average American’s lifespan, the ever-rising costs of medical care and new medical technologies, and the aging of the Baby Boom generation. And while these rising costs are cause for concern for those who worry about the health of our nation’s future economy, polling data consistently note that Medicare remains one of the most popular federal government programs. For example, a tracking poll conducted by the Henry J. Kaiser Foundation in February of 2012 reported that 70 percent of Americans believed Medicare “should continue as it is today with the government guaranteeing seniors health benefits and making sure that everyone gets the same defined set of benefits.”

Back in July of 1965, President Johnson predicted that Medicare would be a vital protection for elderly Americans from the “hopeless despair” of not being able to afford health care. So in a very real sense, Harry Truman had a far more compelling reason beyond the merely political or presidential when he accepted Lyndon Johnson’s invitation to sit beside him 49 years ago: the first Medicare card issued was presented to “Give ‘Em Hell Harry,” making Truman the nation’s first Medicare beneficiary, and the second Medicare card was presented to his loving wife Bess.