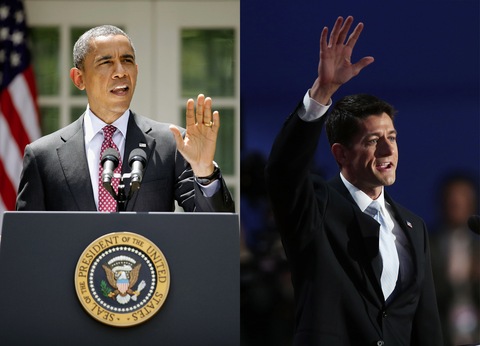 Editor’s Note: GOP presidential candidate Mitt Romney may have largely avoided the topic of health care when he accepted his party’s nomination Thursday evening, but he previously supported many of the broad Medicare reform ideas of his running mate, Paul Ryan. To see how Ryan’s Medicare proposals compare with those of President Obama, read the primer below from our partners at Kaiser Health News.

It may come as a surprise that President Barack Obama and GOP vice presidential nominee Paul Ryan are pushing the same target rate for controlling federal spending on Medicare. Each would set it at half a percentage point higher than the growth rate of the economy — the gross domestic product — after a phase-in period.

Looking at their plans in more detail, however, their approaches to curbing costs are very different. And the practical effects on seniors are also likely to be different.

That hasn’t changed. Republican presidential nominee Mitt Romney has embraced the broad outlines of Ryan’s proposal. Like Ryan, he would replace Medicare’s current defined-benefit coverage of all medical costs incurred by a beneficiary with a defined contribution toward premiums for private health insurance or traditional, government-run, Medicare.

While Democrats have criticized Ryan’s Medicare proposals for years, their attacks have become more vociferous since Romney tapped the House Budget Committee chairman as his running mate. Democrats charge that Ryan’s plan would raise out-of-pocket costs for seniors and ultimately destroy traditional Medicare. Republicans have countered with a spirited reprise of their claims from the 2010 congressional elections that Democrats already cut hundreds of billions of dollars out of Medicare as part of that year’s Affordable Care Act.

Here are some questions and answers about the Democratic and Republican approaches to moderating spending on the popular program, which covers 47 million seniors and disabled people.

Question: If both Obama and Ryan are proposing a target growth rate of GDP plus half a percentage point for Medicare, shouldn’t federal spending be the same under both scenarios?

Answer: There are important differences. Ryan’s plan, which would only affect people currently under age 55, would impose a hard cap on federal spending on the program.

Obama is proposing a softer cap. His proposal follows an effort in the 2010 health law to curb Medicare cost growth by tying the spending target to the Consumer Price Index in early years, and later on to the rate of GDP growth plus 1 percentage point. If federal spending per Medicare beneficiary is rising faster than that — a determination made by the Medicare actuary — then cuts would be triggered. The cuts would come as a percent reduction in Medicare spending, but they wouldn’t necessarily be sufficient to meet the target.

Later, in budget deficit reduction negotiations, Obama proposed to lower the target to the growth of GDP plus half a percentage point.

Question: On the campaign trail, Democrats say that seniors would pay more for coverage under Ryan’s Medicare plan, but Ryan suggests they could choose from one or two plans at no cost. Who’s right?

Answer: Seniors currently pick up some of the tab for Medicare, so it is unlikely that the federal government would pay the entire premium of even a lower-cost plan and still come in under Ryan’s spending cap, say both liberal and conservative health care policy experts.

Under Ryan’s so-called premium support proposal, all plans, including traditional Medicare, would submit bids for how much they would charge to cover a beneficiary’s health care costs. All plans would have to provide a minimum set of benefits equal to the value of those in the traditional program, although not necessarily identical in makeup. They could provide additional benefits beyond that minimum. The government would pay the premium for the private plan with the second lowest bid, or for traditional Medicare, whichever is lower. Beneficiaries would get a rebate if they chose the lowest-cost plan, but would have to pay the difference if they chose a plan that set premiums higher than the second-lowest.

Question: Republicans are accusing Democrats of cutting $716 billion from Medicare to finance the health law. Didn’t they used to say $500 billion?

Answer: The Congressional Budget Office, using a different time frame to assess the law’s impact, has updated its estimate of reductions from future Medicare spending to $716 billion over 10 years. The Ryan plan calls for the same dollar amount of savings from Medicare, even though it would repeal the health care law. But Ryan says the money would be plowed back into the program.

The reductions in the health law mostly affect hospitals, health insurers, home health and other providers who supported the measure because it extended coverage to 30 million uninsured Americans, raising the number of paying customers. The law also significantly reduced payments to private Medicare health plans.

Question: How would Obama’s plan for Medicare affect beneficiaries?

Answer: Obama is a critic of premium support. He would retain Medicare’s defined-benefit structure, meaning that the government will pay whatever it takes to cover a specified set of services.

The health law seeks to hold down costs by promoting changes in the ways providers are organized and paid, to shift from rewarding volume of services to improving quality and patient outcomes.

The health law also created the Independent Payment Advisory Board (IPAB) to come up with proposals to reduce spending if Medicare grows at a higher rate than the target. But the board’s 15 members, who will be appointed by the president subject to confirmation by the Senate, are not allowed to recommend anything that would ration care or change benefits, eligibility or cost sharing for Part A (hospital services) or Part B (physician services). It also couldn’t do anything to change the percentage of premium that seniors pay for prescription drug coverage or the subsidies that low-income individuals get. The expectation is that reductions would come from medical providers, although hospitals are protected at first.

Beginning in fiscal year 2015, if Medicare spending exceeded the target, the board would send its recommendations to Congress. The secretary of Health and Human Services would have to implement those recommendations unless Congress passed alternative cuts. The future of the IPAB is in doubt, however, as Republicans — and some Democrats — have sought to kill it, arguing that the board will end up rationing care and have too much control over Medicare. Obama has yet to nominate panel members.

Some health care analysts argue that reducing payments to medical providers could drive them out of Medicare and create access issues for beneficiaries. Richard Foster, Medicare’s chief actuary, warned in the 2012 Medicare trustees’ report that the health law will eventually lower payments to medical providers so much that “Congress would have to intervene to prevent the withdrawal of providers from the Medicare market and the severe problems with beneficiary access to care that would result.”

Question: And under Ryan?

Answer: Ryan is not specific in his plan about what he’d cut to keep spending below his proposed cap, but he has said that Congress could expand requirements for higher-income beneficiaries to pay more for their coverage. Spokesman Conor Sweeney has said that competition among both public and private health plans would hold down costs, and seniors would be able to choose the health plans best suited to their individual needs. “Seniors want more power and control over their Medicare dollars,” he said. If competition doesn’t keep Medicare spending below Ryan’s target, then automatic cuts would occur.

The nonpartisan Congressional Budget Office estimated that Ryan’s proposal from 2011 would require a typical 65-year-old person to pay thousands of dollars more for Medicare by 2030 than would be the case under its current structure. However, his latest plan, included in the fiscal 2013 House budget resolution, is missing key details, so the CBO has said it is unable to assess its impact on beneficiaries.

Although Ryan would give future seniors the option of remaining in the traditional, government-run Medicare program, it would have to compete with private plans. Critics predict that traditional Medicare could become unaffordable if it attracts the sickest people while private plans lure the healthiest. They also say that beneficiaries might have trouble finding physicians if they abandon the program because their rates are cut.

Question: What’s next for Medicare?

Answer: Lawmakers are unlikely to consider legislation that would restructure Medicare in any significant way until a new Congress — and possibly a new president — are seated in 2013. Still, after the elections, Congress may try to pass deficit reduction legislation that would avert automatic 2 percent cuts in Medicare required under last year’s budget agreement. In the meantime, Medicare is proving to be a contentious issue in presidential and congressional campaigns nationwide, as both parties vie for the coveted senior vote. Behind the scenes, stakeholders — from seniors’ advocates to insurance leaders — are working to produce proposals that protect Medicare and their interests.