Even after the Susan G. Komen for the Cure charity reversed course Friday and said it would not halt grants to Planned Parenthood over a Republican-led congressional investigation, a number of observers wondered if Planned Parenthood might eventually be turned down because of other concerns about how it refers women for mammograms. 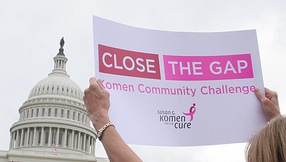 Komen officials said Friday they had no immediate plans to halt funding over concerns raised about Planned Parenthood’s referrals. But in statements the Foundation provided to the NewsHour, it seemed to leave the door open to possibly doing so in the future.

“We will increasingly look to fund grants that can measure outcomes successfully, define outcomes that are important to us, and that meet the needs of the community,” Komen officials wrote in a statement provided to the NewsHour.

“We are moving toward more outcomes-based granting, but that does not mean we will no longer fund education or pass-through grantees,” the statement said.

The questions are lingering in part because Komen officials and spokespeople had emphasized two different reasons over two days for halting grants to 16 of 19 Planned Parenthood clinics that do breast cancer screenings.

On Wednesday, Komen officials had said the primary decision to cut future grants was due to new internal criteria that bar money to any organizations under investigation by federal, state or local governments. Rep. Cliff Stearns, R-Fla., is leading an investigation into whether Planned Parenthood may have used federal funds to provide abortions.

But on a conference call with reporters Thursday, Komen founder and CEO Nancy Brinker spoke instead about a different concern — the way Planned Parenthood clinics provide referrals for mammograms. Planned Parenthood says its funding from Komen has been directly connected with nearly 170,000 clinical breast exams and more than 6,400 mammogram referrals.

Those referrals seemed to be the central issue cited Thursday. And it came after Planned Parenthood and many women said they believed Komen had caved to political pressure surrounding the fact that Planned Parenthood provides abortions.

“We have decided not to fund, wherever possible, pass-through grants,” Brinker told reporters yesterday. “We were giving them money, they were sending women out for mammograms. What we would like to have are clinics where we can directly fund mammograms.”

In an official statement released by Komen to the media Friday morning, Brinker directly addressed the question of investigations, saying that an “investigation must be criminal and conclusive” to disqualify a group from receiving a grant. But Brinker’s statement this morning seemed to skirt the other concern raised less than 24 hours ago about mammograms and services.

Reporters openly wondered throughout the day whether Komen was leaving itself an out.

On Friday night, Komen spokespeople said there was no push to stop grants to Planned Parenthood for now over those reasons. But they noted that chapters and affiliates could make their own decisions.

“For the time being, grants are active and Planned Parenthood — like all grantees — is eligible to reapply,” Komen said in the statement provide to the NewsHour. “The affiliates will make the decisions about the grants in their communities.”

Komen provides $93 million in grants to communities throughout the United States.

One other story that is getting some attention in the outrage from the past three days is the role Planned Parenthood provides with breast cancer screenings and exams. The Associated Press has a good breakdown of it here.

On Friday’s NewsHour broadcast, Hari Sreenivasan spoke with Amina Khan of The Los Angeles Times about the abrupt shift in message at the well-known breast cancer charity.