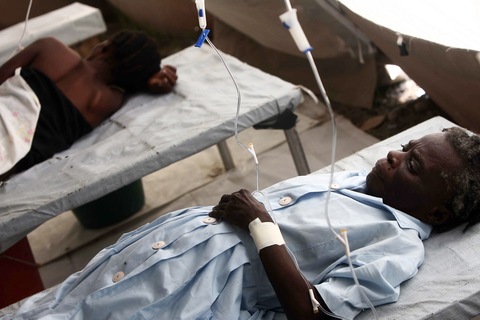 The months-long rainy season is just beginning in Haiti, boosting the number of cases of cholera just as critical sanitation services are in limbo.

Cholera is waterborne and often spreads through sewage, making it harder to contain in rainy, wet conditions. In the three weeks prior to the rains, the Partners in Health cholera center in Mirebalais, Haiti, saw 500 cases combined, but the weather has brought a new rise in cases.

“Since the rainy season began in the last two weeks, we’ve seen 1,000 cases,” said David Walton, who runs the center.

While many of the new cases are less severe than the deadly wave that first hit the country last fall, Walton said the uptick could be an indicator of things to come.

“I worry that given what I’ve seen, we could be overwhelmed again at the cholera centers,” he said.

The country is seeing about 2,000 new cases of cholera a week, according to the United Nations Office for the Coordination of Humanitarian Affairs, but a lack of funds for sanitation services could make the situation worse.

Just 17 percent of OCHA’s $915 million appeal for Haiti is funded, said spokesperson Emmanuelle Schneider from Port-au-Prince. And while some activities are being transitioned to the Haitian government, the money available is simply “not enough,” she said.

“If we are not able to keep sanitation activities in camps, latrines are going to overflow, it’s going to be a source of cholera contamination — there will be open defecation,” Schneider said.

OCHA provides latrines to 1.5 million people and water to 1.2 million through free water trucking. The administration of the next president, newly-elected Michel Martelly, will have to absorb these services without additional aid, as it balances the many needs of the more than 680,000 people still living in tent camps.

“If we don’t manage to make a transition that is successful, obviously we are risking…a mortality rate that is going up,” Schneider said.

The mortality rate for the disease has dropped to 1.7 percent nationally, OCHA says, down from close to 9 percent, but the distribution of deaths is uneven and rural areas without access to services are still at risk.

There have been an estimated 250,000 reported cases since October, and more than 4,600 deaths, according to the Pan American Health Organization.

But new research published in the Lancet also suggests the epidemic could become much larger than the U.N. projection of 400,000 total cases over the course of the epidemic.

Sanjay Basu, a doctor and medical resident at University of California San Francisco, and Jason Andrews, a fellow at the Massachusetts General Hospital and Harvard Medical School, modeled the epidemic using data they gathered from provinces around the country.

They built in the assumption that only one of every three cases are reported in the hospital, while many would go undetected or unreported in the community. They projected 779,000 cases, and about 11,100 fatalities in the next eight months.

“In the case of Haiti it’s likely to stay smoldering at a low level for at least a year,” Basu said. “It’s likely that you’ll see small micro outbreaks in localized areas and a resurgence unless more permanent infrastructure for waste and free and clean water are developed.”

The researchers are also calling for wider use of antibiotics — which the Haitian government recommends for severe cases only — and a cholera vaccine, which has been proposed only on a pilot level in Haiti by the PAHO.

Schneider said the study is “one perspective” and that the U.N.’s projections were made by the World Health Organization and the CDC and have been “consistent with the reality in the field.”

While the scale is still being debated, all sides can agree the disease has highlighted some of the weaknesses in infrastructure that Martelly will have to address when he takes office and oversees the massive earthquake recovery.

Walton said awareness of the disease has contributed greatly to better outcomes but there is still a need for more cholera centers, better sanitation and better access to health services in general.

“With the upcoming new administration, people are extremely hopeful that there will be change for the better not only for cholera but for access to care,” he said. “Haiti is and has been a hopeful place, even in the thick of the cholera epidemic.”