Autism, puberty and one family’s struggle to raise their teenage sons

SHERRILL, N.Y. — Alexander Brown swings back and forth on a makeshift hammock bolted to a wooden beam in his living room. The swaying seems to soothe the otherwise uneasy 14-year-old. His mother gazes at him from the couch and their eyes briefly connect.

“I would love to be in Alexander’s head just for a few hours,” said Diane Brown, her head slumped against her hand. “He’s having a hard time going through puberty right now.”

Alexander is confused, moody and frustrated – all very typical for a teen during adolescence. But Alexander’s transition is especially difficult for the Browns, a family of six in Sherrill, N.Y., because he is severely autistic.

Puberty is causing chaos in Alexander’s once-predictable world. He can’t talk and struggles to express himself. “He’s angry and he’s sad . . . and he doesn’t understand why,” Brown said. “I truly feel for him.”

Alexander, the third of four children, rarely sleeps through the night. He gets up at all hours to wander the kitchen, take a shower or throw a tantrum. He’s begun lashing out physically.

Brown, 45, is exhausted. She averages four hours of sleep a night and powers through most days with the help of Red Bull.

The Browns all have what they call “war wounds” from dealing with Alexander: scratches, bite marks and bruises. When he’s in a mood, they say, no one is safe, not even the family dog.

“He clawed up my arm and it angered me,” said Alexander’s 11-year-old sister Maya, the youngest in the family. “But whatcha gonna do?”

The sixth-grader has to be alert when her brother is around. “If I see Xander run towards me, I just run into another room so I don’t get attacked,” she said. “You grow used to it.”

Brown, who sneaks cigarettes every now and then to calm her frayed nerves, compares the experience to riding a roller coaster without a restraint – for child or parent.

Worse, she said, it’s the family’s second time on this terrible ride.

Isolated But Not Alone

Alexander has a 19-year-old brother, Connor, who also has severe autism. The eldest child, he can’t speak much or care for himself. Six years ago, he became so physically aggressive that the Browns couldn’t handle him.

The final straw came when Connor knocked his parents down as they tried to force him onto his school bus. The driver insisted he be secured to the seat using a soft body restraint to keep his arms from flailing. After that, the Browns decided to move Connor to the Tradewinds Residential Program, a 24-hour-care facility at the same site where he and Alexander attend school during the day.

“We sat on the back step…and we cried,” said Diane Brown, her voice trembling. “It was a realization at that moment that this was something that we had to do for all of us.”

Coping with two severely autistic sons five years apart, the Browns have often felt isolated. But their troubles are far from unique.

For every 68 American children, one is estimated to have autism spectrum disorder, a developmental condition that impairs communication, behavior and social interaction with varying degrees of severity, according to the U.S. Centers for Disease Control and Prevention. 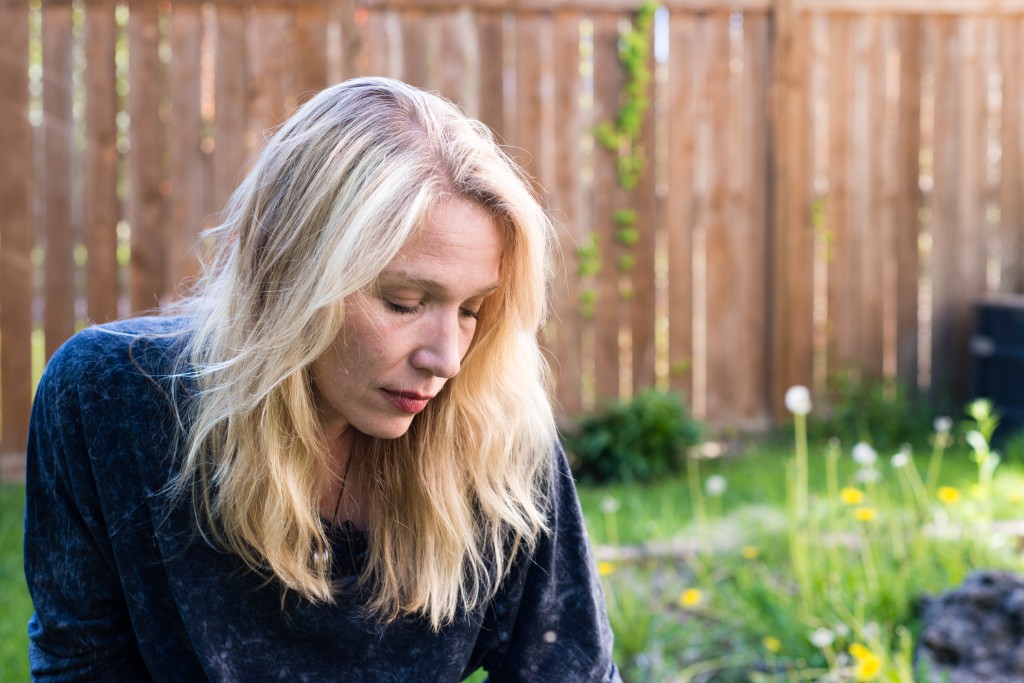 Diane Brown, 45, rests her eyes for a moment while her 14-year old son plays in the backyard of their home in Sherrill, New York on Thursday, May 14, 2015. Brown says she hardly gets any sleep because her autistic son wakes up several times a night. “I’ve got real good at taking 15-minute naps,” she said. Photo by Heidi de Marco/KHN

Scientists don’t know all the causes, but most agree that the condition has a strong genetic component. It afflicts many more boys than girls, and parents of one child with autism are at higher risk of having another. One study found that nearly a fifth of young children with older autistic siblings had the disorder, and the risk rose substantially for infants who were male.

Many families are unprepared for a second diagnosis, much less for guiding two autistic children into adulthood.

Aggression is relatively common though hardly universal in autistic kids. According to one study, parents reported that 68 percent had demonstrated aggression toward a caregiver at some point and 49 percent to non-caregivers.

Other research has found that aggression among autistic children contributes to parental isolation and exhaustion, threatens the safety of the kids themselves and other family members, is the leading cause of stress for caregivers and is the primary reason that families seek to have them placed outside the home.

Research is limited on autistic kids who are going through puberty.

But some experts suggest that while children’s behavior may improve during elementary-school years, it can deteriorate with the physical and hormonal changes that come with adolescence.

The vast majority of autistic kids remain in the family home, and just 2 percent live in outside supportive facilities, according to one study. Some advocates and providers say home is the best setting for such children, because the risk of abuse, neglect and exploitation is greater elsewhere. Others say living in a more structured setting may offer advantages for some kids and their families.

“The reality is that for a lot of autistic kids, normal family life is pretty chaotic. A group home might add a little bit of structure to the equation,” said Brad Boardman, executive director at the Morgan Autism Center, which provides individualized education but not residential care for children with autism in the San Francisco Bay area.

“It can also be beneficial to families who have got into a negative pattern with a child or are seeing aggressive behavior at home,” he added. “Sometimes a move into a residential group home can be a way to reset the relationship.”

The Browns have wrestled with this question for years: What is the right thing to do – both for the child and the family as a whole?

Every Day A Struggle

When Connor was born, his mother knew next to nothing about autism. “He didn’t make eye contact. He cried a lot. He was a very difficult infant,” she said. “Me being a first-time mom, I thought, ‘I’m doing everything wrong. This is my fault.’ ”

He was diagnosed at 3, Brown said, and never received the early interventions commonly used today.

Connor was always aggressive, Brown said. His reaction was always to get mad, throw a tantrum or break something. And when he reached puberty, his behavior became much worse.

“Ever since I can remember, Connor would throw random fits,” said Spencer, 17, the second-oldest of the four siblings. “He had my mom in a chokehold once…and I had to try and help.” 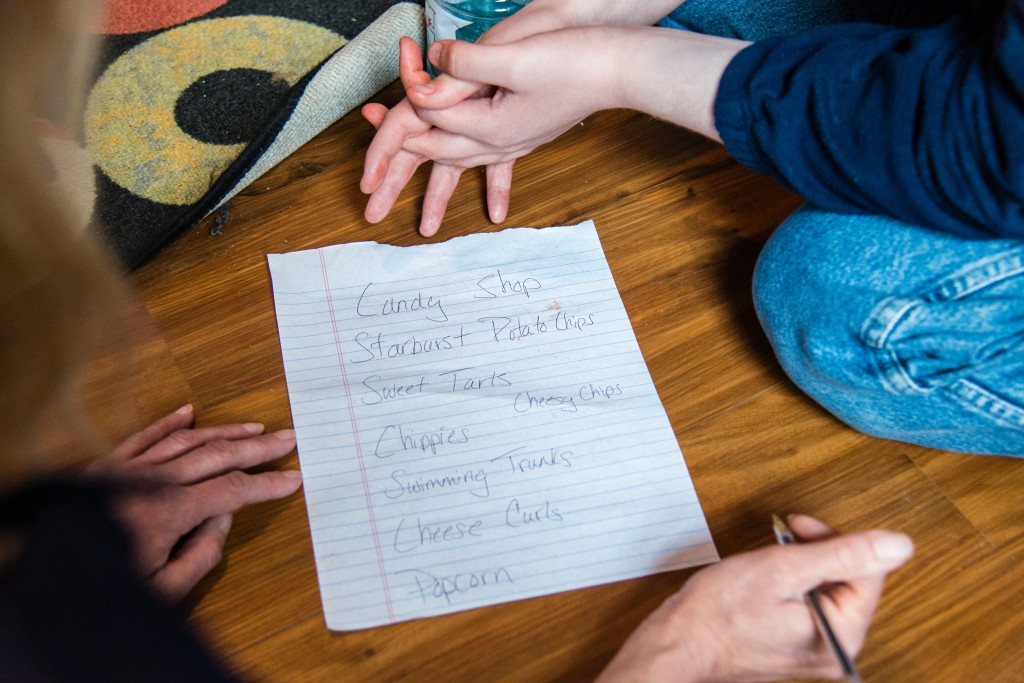 Diane Brown makes a shopping list with her autistic son, Connor Brown, on May 13, 2015. Connor, 19, was enrolled at the Tradewinds Residential Facility after a period of aggressive behavior during puberty. Diane visits Connor every other day. “I see it as him going to college,” said Diane. Photo by Heidi de Marco/KHN

Alexander’s life has been easier, partly because Connor came first. After spotting Alexander’s early cognitive delays and unusual emotional reactions, she took him to a pediatrician. He was diagnosed with autism spectrum disorder at 18 months and began receiving a wide range of state-funded services, including speech, behavior and occupational therapy in the home.

Still, Brown was devastated. She kept thinking about the first time she held Alexander, full of hope. “You expect as a parent that you’re going to love your child and instantly have that bond,” she said. “Then they don’t love you back, and you blame yourself.”

“I honestly felt like I didn’t have the strength to do it again.”

To relieve the stress, she started a blog about having two autistic sons. She did yoga. She took a job at a local cafe to have something to do outside the home. And she took care of Connor and Alexander the best way she knew how.

Five years ago, not long after Connor moved into the residential program, Brown said she became severely depressed. “It hit me really hard for a while. But I had to quickly snap out of that.”
Spencer and Maya struggled, too.

“It’s hard to have friends come over when all you hear is screaming in the background,” Spencer said. “They’ll ask, ‘What’s that?’ ” And with a shrug of his shoulders, he replies, “Oh, that’s just my brother.”

On their good days, Maya said, Connor and Alexander can be “the sweetest boys.” Alexander will sometimes kiss her cheek or play with her on a trampoline at their grandmother’s house. “It’s not like they’re monsters or anything,” Brown said. “They’re just a little bit different.”

Lately, though, Alexander has become harder to handle. He’s taller than his mother now, and he will outweigh her soon. Diane struggles to get him dressed and shave his sprouting mustache. He doesn’t lash out as violently as Connor did, but she can’t control him when he does.

Brown’s husband – the children’s father – recently moved out of the house, because of escalating tensions, Diane Brown said. (Research on marital breakups among parents with autistic children is mixed. Some shows virtually no difference with other families but other work suggests a greater rate of divorce, particularly as children get older or as their behavior becomes difficult.)

Brown’s husband comes daily to help with the children and household tasks. But his wife frets about everyone’s safety and well-being, including Alexander’s. 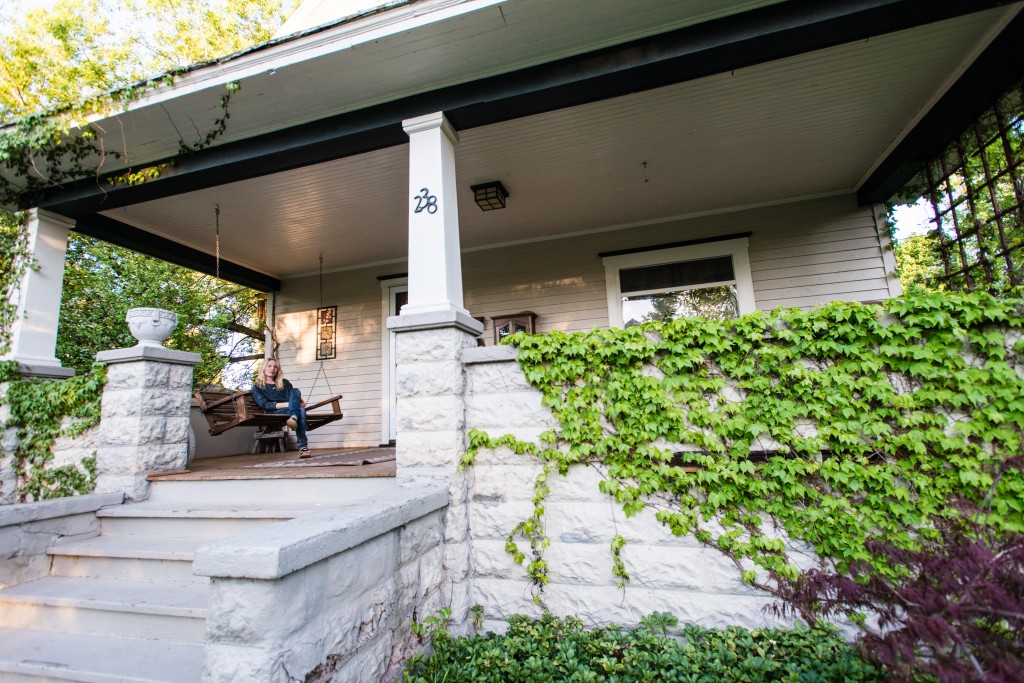 Diane Brown sits on her porch swing on Thursday, May 14, 2015. “I have four children. Two of them have a label, two don’t. Each have their own needs and I need to get my act together and be mom to all of them,” she said. Photo by Heidi de Marco/KHN

“When you have a child who just existing is so hard for them and you can see them struggle with it every single day…you want to make it better,” Diane Brown said.

She has sadly come to believe that “making it better” means giving Alexander the same around-the-clock care that his older brother receives.

“Alexander, just like Connor did, has outgrown our little family here,” she said. “I’m certain at this point it’s time. Time for someone to step in and be stronger and more awake than I am.”

Brown has put him on the waiting list for the facility where Connor lives, a 15-minute drive from the house, and expects an opening soon. There, he, like Connor, would be able to see counselors and behavioral therapists, enjoy some recreation and get the structure and support he needs.

“It’s not elaborate, but it’s comfortable and fully staffed,” she said.

Alexander’s care, like Connor’s, would be paid for by the Social Security Disability Insurance program, state school funds and Medicaid.

Maya says she understands. “I know it will be better for him and safer for us,” she said. “But I will miss him so much when he’s there.”

Talking of Alexander’s departure, Brown seems less at peace than resigned. She knows she’ll feel emotional and empty when he’s gone – that’s how it was with Connor.

“I just want them [both] to be happy in their skin,” she said.

This story was produced by Kaiser Health News. It was produced in partnership with the Washington Post. The California Endowment helps fund KHN coverage of the Affordable Care Act in California.

Left: Alexander Brown, 14, sits in his living room on Thursday, May 14, 2015. He was diagnosed with autism at 18 months. Alexander is having a hard time with puberty and is lashing out physically. Photo by Heidi de Marco/KHN