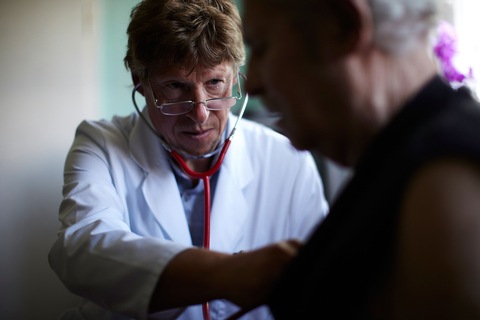 Americans die sooner and experience unhealthier lives than residents in other high-income countries even though the United States spends far more on health care, according to a report released Wednesday by the National Academy of Sciences. This health disadvantage exists across all ages and demographics.

The report — commissioned by the National Institutes of Health and conducted by the National Research Council and the Institute of Medicine — compares health statistics in 16 high-income democracies in western Europe, as well as Australia, Canada and Japan. In many cases, the U.S. ranks last.

“The U.S. is doing worse than these others countries both in terms of life expectancy and health throughout their entire lives. This is a pervasive problem from birth to old age; it affects everyone and has been a long standing problem,” Dr. Steven H. Woolf, chair of the committee that wrote the report, told PBS NewsHour.

The U.S. has been falling behind other high-income countries since 1980, with the trend showing continuing deterioration regardless of administration or social reform policies.

“When asking why this trend is happening, it cannot be blamed on a particular administration or social reform policies. All we do know is that our life expectancy is shorter and we have poorer health throughout our lifetimes,” Woolf said.

Of the 17 countries analyzed, the U.S. ranks last in life expectancy and overall health care coverage.

More specifically, when compared to the aggregate of its peer countries, the U.S. fares worse in the following health areas:

The panel found several possible reasons why the U.S. might be performing so poorly in many areas.

The U.S. has the largest percentage of people uninsured or without access to primary care. Americans consume more calories per person, have a higher rate of drug abuse, and are less safe on the road compared to their global peers. Social and physical environments such as income inequality and discouraging physical activity are also contributors.

Matthias Rumpf of the Organization for Economic Co-operation and Development — a group that conducts similar research — agreed with the findings, though he added that lack of primary care access also directly affects the U.S. life expectancy rate.

“Our research shows the U.S. is doing well when it comes to complicated surgeries or conditions such as cancer, but if you don’t provide affordable primary care to everyone, then patients end up in a hospital with their avoidable condition too far deteriorated to be saved,” Rumpf said. “This directly affects the life expectancy rate in America.” 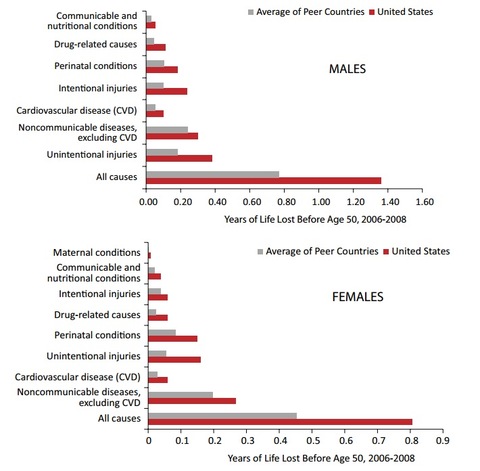 In response to the report, the U.S. Department of Health and Human Services released a statement, saying that “improving health outcomes is one of our top priorities and that’s why we are working hard to implement the health care law” to ensure more Americans get the care they need.

But Woolf said the current debate over the Affordable Care Act and its potential to change the system is too narrow. “We cannot just deal with one particular category,” he said. “We need to look at public health systems, social and economic conditions, education reform, social-physical environment, and national health care reform.”

Woolf said that while many Americans understand that the U.S. spends more on health care than other nations — and without necessarily better results — there’s also a tendency to attribute it to minorities or those with severe health problems. But the report shows that even Americans with health insurance and those who have the highest education and income levels fall behind their counterparts in other parts of the world. 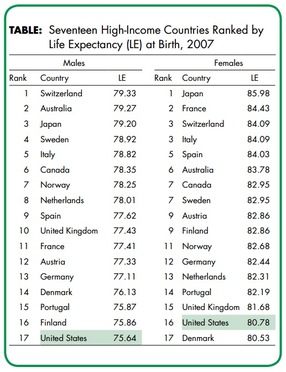 “The fact is, people are dying earlier than they should be and suffering at rates that are avoidable,” he said. “They are suffering from diseases we know how to prevent and then dying unnecessarily.”

So what’s to be done? One choice might be to live with it, Woolf said. “Just accept the fact that we have fallen behind and we will from now on always be behind. There are other possible choices, but they might require some changes — especially on how we manage health and social and economic policies.”

The first step to any solution is awareness, Woolf said. If more cuts to spending in the public health sector and education are to be made, they should happen with the knowledge that the U.S. will continue to fall behind its peers, he said.

Watch the video below for more from Dr. Woolf about the study’s major conclusions.