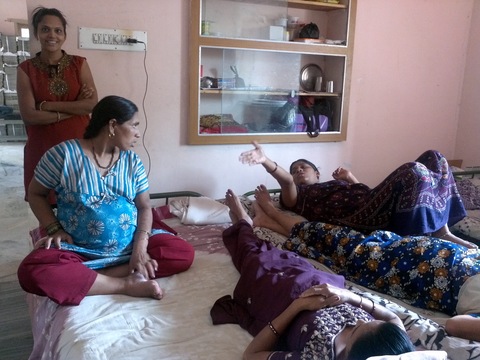 Thursday on the NewsHour, you’ll see an excerpt of the film “Made in India,” which documents the journey of an infertile American couple and their Indian surrogate. It’s part of our collaboration with The Economist Film Project.

Then on Friday’s NewsHour, Fred de Sam Lazaro looks at some of the ethical questions surrounding this thriving industry. Read his reflections below:

An Indian surrogate mother cannot challenge the commissioning parents for custody of the child. Economic realities also make it less likely she’ll want another mouth to feed. That’s in sharp contrast to the United States, where disputes surrounding parental rights have led a dozen states to restrict or ban surrogacy. In Britain, a surrogate mother can, by law, assert full parental rights, should she choose and surrogacy is banned altogether in several European nations.

In India, surrogacy is much less complicated and costly than adopting a healthy infant and contracts typically require a surrogate to sign away any rights to the child she will bear. She will receive a lump sum at the end of the pregnancy that can range from U.S. $2,500 to $10,000, depending on the clinic, and all related medical expenses. That kind of money is many times the annual household salary of the typical surrogate and in theory can lift her family out of poverty. Women we spoke with at the surrogacy clinic in the small town of Anand said they would use their windfall to educate their children and to build new homes.

Whether most surrogates do call the shots on such decisions in a tradition-bound society is an open question. Stories abound of young women being coerced into surrogacy by their families. Indeed much of our information about this emerging industry in India is based on anecdotes and worries University of Pennsylvania medical ethicist Arthur Caplan on many levels.

He feels the relationship is inherently lopsided between women of marginal education and impoverished backgrounds and the well-heeled patients looking to rent their wombs. Surrogates also have little recourse should they ever develop long-term health consequences from their pregnancies.

The arrangements also raise complex questions, he said, like will commissioning parents be required to accept a child that is born deformed? What if the parents divorce before their baby is born?

The 2008 case of a baby girl named Manji is a sobering example of unforeseen complications. The infant was “commissioned” by a Japanese couple. Unable to produce viable eggs of their own, the couple used a donor egg from an Indian woman and the intended father’s sperm. The commissioning parents then divorced during the surrogate pregnancy.

Manji’s intended mother dissociated herself from the entire transaction. The intended, and biological, father got a rude shock when he tried to get the child a passport to take her home: Japanese law did not recognize the baby girl as a citizen since her mother was not Japanese. They suggested that the father legally adopt the child. This required a birth certificate, which Indian authorities said they could not issue because the document requires a mother’s name. Even though three women were involved in her creation, Manji legally had no mother; the egg donor, surrogate and intended mother all renounced or never had that right. It took months of legal and legislative wrangling to sort out the case.

Dr. Nayna Patel, who founded Anand clinic says she anticipated or learned from such problems and insists the contracts she draws up are equitable. But Dr. Patel concedes that surrogacy is largely unregulated and even though laws are in the offing, there’s no telling how strictly they could be enforced.

Until medicine perfects a uterus transplant, Dr. Patel says the business of surrogacy is certain to be in strong demand and a legal and ethical work in progress.

Caplan anticipates more questions will emerge in future, and one popped into my own head, for which I’ve yet to receive a clear answer. Perhaps it’s out there in the NewsHour audience: Is a child born to American parents but also to a surrogate in India eligible to be president of the United States?