Reporter’s Notebook: Obesity on the Rise in China 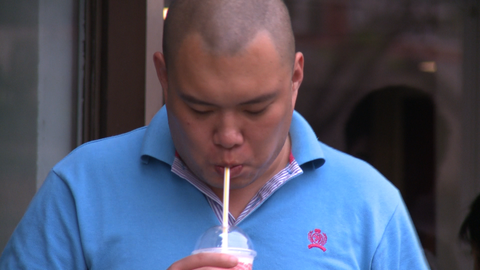 If one picture from China can tell a story of how this country has changed in the 21st century, it’s one of a line of youths boarding a bus in front of a hospital for a field trip.

It’s a fat reduction hospital. The trip is to a nearby gym. And all the young people are obese.

Food insecurity marks a culture and at times in history China has seen the worst of it. In the 1930s, 5 million people starved to death. In the 1940s a million died, and between 1959 and 1961, 20 million people died from famine.

Before this latest chapter in Chinese history, a chubby husband was expected to be prosperous and a good provider. Fat babies were assumed to be healthier. China often had food shortages, if not outright starvation. Cooking oil was a luxury. Rice made a meal with little meat and some vegetables go further.

The country is now grappling with what happens when — in the blink of an eye in historical terms and in a similar instant in biological time — people are not food limited.

The Chinese have been able to add a lot of meat to their diets, made milk a more common feature of their diet, and there’s no limit to the amount of oil you can use in your cooking. Sweets can move from an occasional treat to a daily indulgence. Portion sizes are getting bigger, Western-style food is widely available in the urban areas, and people are eating out more often.

And remember, incomes and opportunities to eat are growing in a society that is still officially dedicated to a one-child policy, in a society that adores children and lavishes them with affection, and food. With lengthening lives and widespread birth control, the “4-2-1 problem” is very much in evidence on Chinese streets … not only is there more to go around, but there are fewer mouths to feed.

Let’s be clear, the Chinese obesity problem is not anything like that in Western countries, especially the United States. There are some 19 million people in China clinically determined to be obese. Millions more are overweight… but this is a country of just over 1.3 billion people. The obese are roughly one out of 70 people in China, as opposed to one out of three in America.

This is also a problem that highlights particular divides in Chinese society. The obese are concentrated in the urban centers of the east, where wages have risen quickly and lives of daily physical toil are less and less a feature of working lives. You are unlikely to see a fat farmer, and even in the urban areas, the streets are hardly full of fat people.
But China’s obese population is growing 30 to 50 percent each year. If you extrapolate that growth out for a few more decades as the country gets richer, the country will have a very big problem in years to come. Remember, there’s only a vestigial social safety net. China is doing a basic, adequate job treating today’s blocked arteries, heart disease and gout.

When policy makers in China look at the rate of increase, and look at their ability to cope with the problem in 2020, and 2030, that’s when the anxiety sets in. I visited a hospital in one of China’s largest cities, Tianjin, a bustling, clanging, fast-rising factory town and seaport of 10 million people. The young patients at the Aimin Fat Reduction Hospital come for a month of treatment, paid for by worried families.

I sat with a heavy young fellow as he received his acupuncture treatment for the day. Acupuncture, I was told, would help limit his appetite. He was also exercising more and eating a controlled diet with a goal of losing 70 pounds. After fewer than two weeks he was well on his way toward his goal, unashamed and comfortable telling his story.

His predicament was a common one: he had gained weight throughout his teen years, and now at 18 he was apparently obese. Earlier in the timeline he coped with his expanding girth, but now things had gotten to the point where it was tiring to walk, harder to exercise, socially limiting and made him feel excluded in his circle of friends. He understood how he had landed in a hospital bed with needles in his torso and legs. He understood what he had to do to change his way of life. He assured me he would do what’s necessary to make healthy changes in his life.

As a practical matter, the changes in daily life in China that have driven widespread weight gain are not that easy to counteract. When you watch a Chinese family sit down to hot-pot, “guo-guo,” you’ll notice that everyone sharing in the meal eats from a communal pot. The diner doesn’t first dole out food on a plate or in a bowl and then eat it, making portion control more of a challenge. How would you even know how much food you’ve eaten?

At that same table, as ingredients are simmering away in the pot, individual bowls of seasoned oil are placed in front of each diner for dipping. There’s already plenty of oil in the big pot too… calorie dense, and stealthily adding lots of calories to a casual dinner. At a Shanghai outlet of Weight Watchers, members are urged to use a specially designed oil cruet that delivers only a pre-measured portion of oil for the cook.

Today, untold millions around the world will wake up with a gnawing hunger, and go to bed pretty much the same way. That daily reality exists side by side with a world where new billions are able to eat as much as they can get their hands on, where food is cheap and abundant. The human body developed systems and strategies for coping with periods of episodic hunger. You can see it in the way we accumulate fat on our bodies, storage for a day we’ll need the energy in those excess calories.

This new thing… abundance along with a less physically strenuous life, is driving our bodies crazy. International health organizations are talking about “globesity,” a trend that connects people in newly food secure societies around the world. China will either teach us some useful lessons about how to cope with the new normal, or give us a discouraging picture of how food security won with hard work and technological innovation might make humankind sicker in the future.

This week, the NewsHour will air several Ray Suarez’s reports on health problems in China. On Monday, he reported on why the Chinese government has done little to curb the nation’s smoking epidemic. Tuesday’s NewsHour will feature a report on China’s growing obesity problem.