Republican Governors: Reform Law will Cost too Much

It’s one of the central debates around health care reform — in the end, will the reform law cost too much, or will it actually save money? 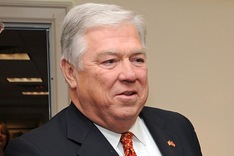 On Tuesday, Republican lawmakers and governors argued that it will cost too much — at least from the states’ perspective. In a hearing before the House Energy and Commerce Committee, Republican governors Haley Barbour of Mississippi and Gary Herbert of Utah testified that the Medicaid expansion included in the law will put a financial burden on states, and that states need more flexibility than the law allows to develop health systems that fit their needs.

Beginning in 2014, the reform law requires states to expand Medicaid eligibility to cover everyone who earns up to 133 percent of the federal poverty level — about $30,000 per year for a family of four. That will add tens of millions of people to states’ Medicaid rolls. The federal government will cover the entire cost of the new additions for the first three years. After that, it will gradually reduce its contribution to 90 percent by 2020, with states making up the rest.

Before the hearing, the Republican-led committee released a report that estimated that the Medicaid expansion would cost states $118 billion by 2023, nearly double the $60 billion that the nonpartisan Congressional Budget Office estimated that it would cost by 2021. The new estimate was based on state government cost projections, the report’s authors said.

“The only way we can afford to do this is going to be to cut from other programs […] or a big tax increase,” Gov. Herbert told the committee.

But the new report conflicts with projections that suggest that states will, on balance, save money under the health reform law, Nick Papas, a White House spokesman, told Bloomberg News. He said that a study by the Urban Institute (described here) found that states may save as much as $131.9 billion from 2014 to 2019, Bloomberg reported.

Barbour and Herbert testified at the House committee hearing, along with Democratic governor Deval Patrick of Massachusetts. All three were in Washington for the annual meeting of the National Governors Association.

The Republican governors also argued that the compromise President Obama endorsed Monday — to allow states to opt out of parts of the reform law if they could achieve the same coverage goals in other ways — didn’t go far enough.

“Of course the devil is in the details,” Barbour said. But, he argued, states would still be required to, for example, make insurers offer mandatory standard benefit packages that are higher than what they are now. “So if it doesn’t give us relief from that […] then it’s really not all that much help.”

Gov. Patrick defended the health reform law, which he said was similar to the 2006 Massachusetts law that was working well in his state.

“Today, thanks to effective implementation of reform, more than 96 percent of Massachusetts residents have insurance coverage,” he said.

But Barbour, who is considering a run for president in 2012, took a dig at a potential Republican rival — former Massachusetts governor Mitt Romney, who ushered in the state’s reform law. What works in Massachusetts is not right for Mississippi, he said.

“Massachusetts has a state health insurance program that they’re obviously happy with,” he said. “If that’s what Massachusetts wants, we’re happy for them. But we don’t want that. That’s not good for us.”