Researchers aim for first human eye transplant within the decade

PITTSBURGH — Scientists have strived for successful eye transplants for centuries. Early attempts read like the diary of Mary Shelley: implanting a dog’s eye into a rat’s groin, transplanting a rat’s eye onto the neck of another rat, plucking the eye of a sheep from one socket and placing it into the other.

But never has a whole-eye transplant been successfully done in a living person. The eye’s complex web of muscles, blood vessels, and nerves — connected directly to the brain — has doomed past experiments to failure.

Now a team of Pittsburgh transplant surgeons aims to turn that tide, and they’re hopeful they can do so in just the next decade, using donor eyes to restore sight in people who have suffered traumatic eye injuries.

“I’m hopeful that in 10 years we will be doing eye transplants in humans,” said Dr. Kia Washington, plastic surgeon at University of Pittsburgh Medical Center and head of the research team. “There are people who are very skeptical, obviously, for obvious reasons. It is kind of a moonshot.”

And it’s a moonshot that’s of special interest to the Department of Defense, which is the main funder of the project. Traumatic eye injuries are the fourth most common combat wound for American soldiers. Counting both soldiers and civilians, nearly 1 million Americans are living with impaired vision due to eye injury. With donor eyes, Washington and her colleagues believe, many could one day see again. 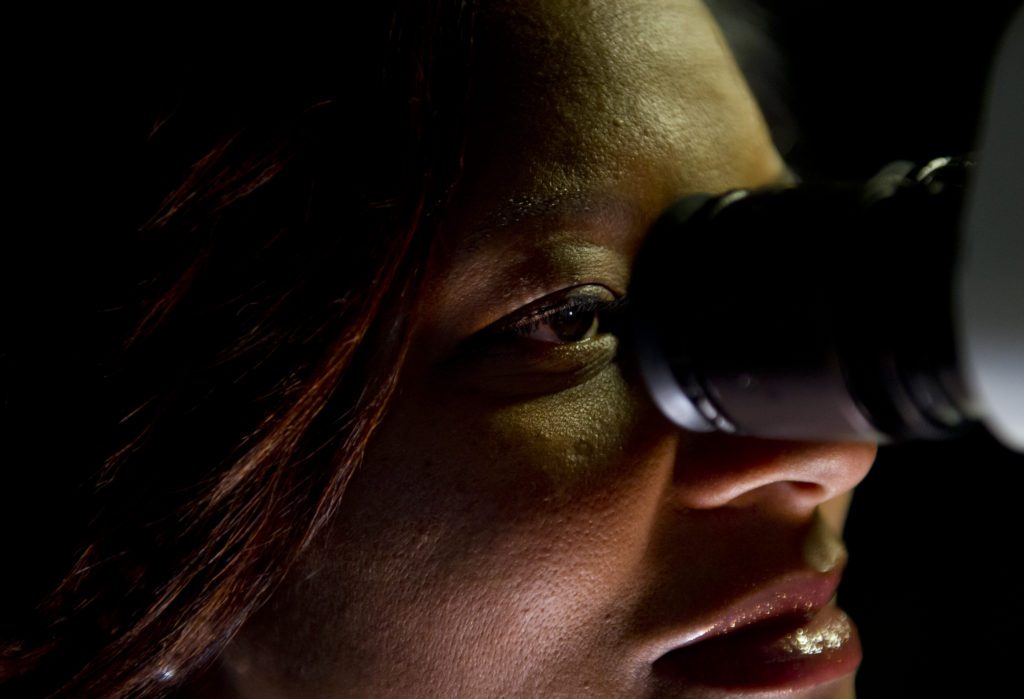 The first reported eye transplant attempts in animals began in the 19th century and peaked during World War II. As recently as 1977, a task force at the National Eye Institute concluded, after thoughtful laboratory investigation, that whole eye transplants could not be successful. These experiments were plagued with issues of immune rejection, inadequate blood flow, and lack of nerve function.

If the transplanted eye is ever to see, nerve connections are essential — and also the most complicated part of an eye transplant. The optic nerve, which connects the eye to the brain, is part of the central nervous system, along with the brain and spinal cord. While nerves elsewhere in the body — say, those in the fingers, or on the scalp — survive injury and regenerate easily, the central nervous system is not so resilient.

But Washington and team have begun to crack the code of the optic nerve, keeping its cells alive outside the body and coaxing it to regrow in a donor animal.

And recent decades have seen tremendous advances in other aspects of transplant medicine, including immunosuppressive drugs and microsurgical techniques, Washington said, which have allowed transplants that were previously impossible.

“Ten years, 20 years before hand transplantation occurred, there was a lot of skepticism and simply the technology wasn’t there,” Washington said. “You can argue the same thing with eye transplantation.”

The team took a major step forward last month with a paper showing the successful transplant of a rat’s eye into another rat, including joining the optic nerves. The organ was healthy and alive up to two years later. The next stage, with the DoD funding, is to regenerate the nerves to actually restore sight in rodents, primates, and, eventually, people.

“The development of the rat [eye and partial face transplant] model, by Kia, is a huge advancement in being able to conduct the complex science needed to successfully transplant a whole eye,” said Rob Nickells, a collaborator with Washington who is a professor of ophthalmology and visual sciences at University of Wisconsin. “I would confidently say that given success of the [nerve] questions, she will be the first surgeon to accomplish this feat.” 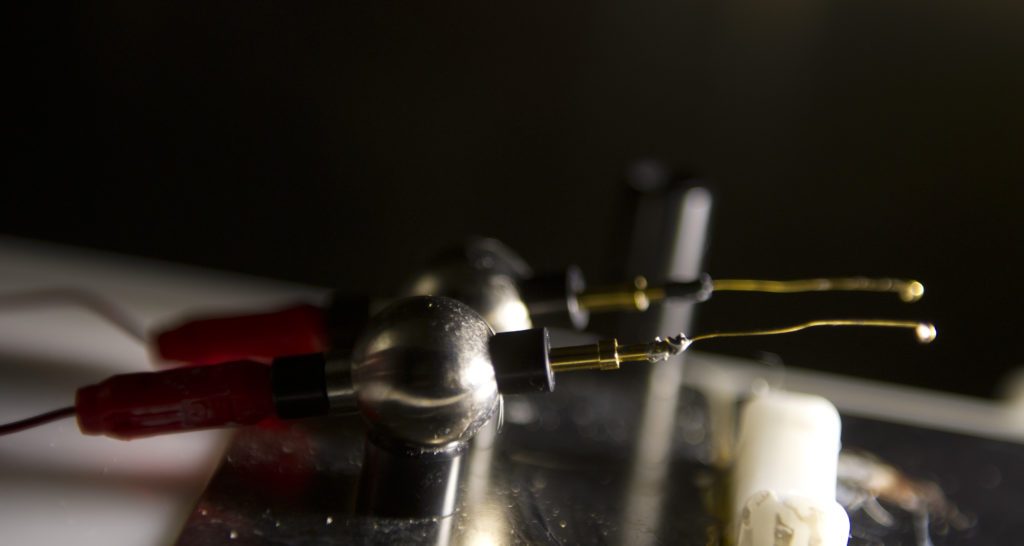 PITTSBURGH- November 16: An ERG machine used to check nerve viability in transplanted rat eyes in the lab of Dr. Kia Washington, a plastic surgeon at the University of Pittsburgh Medical Center pioneering the research into whole eye transplants. Photo by Jeff Swensen/STAT News

A question of nerve

The key to these eye transplants, team members say, is the problem of the delicate optic nerve. The first hurdle was simply keeping the nerve alive.

“Just harvesting an eye for transplant is telling all the [optic nerve] cells that they’ve gotta die,” Nickells said.

In tests on mice, Nickells zeroed in on the BAX gene, a key player that orchestrates cell death. In 2010, he discovered that mice without this gene didn’t lose any of their optic nerve cells after injury, even years later — whereas in a normal mouse all of the cells were dead within three weeks.

Since then, Nickells has been working on how gene expression — not just the mere presence of BAX or other genes — impacts neuron survival. In the future, he plans to begin searching for a drug candidate that could block BAX, which could theoretically be added to the solution that preserves the donor eye until it can be transferred to its recipient.

The second hurdle, after keeping the cells alive, is actually spurring the nerve to grow. The donor nerve can’t simply join together with the recipient stump, but instead has to regrow all the way from the eye to the brain. In an adult, nerve cells lack this ability for growth, but Harvard Medical School professor of neurology Zhigang He has been working with Washington to try to turn back the clock.

“We need to find a way to reprogram old neurons to be young neurons,” He said. “Adult neurons don’t have growth ability. Somehow we have to make them able to regrow.”

In January, He and his team published a paper showing that a novel drug cocktail can do exactly that in mice. The drug disables a tumor suppression pathway and allows neurons to grow. When researchers cut the optic tract just outside the brain, the nerve regrew to bridge the gap within 28 days.

But could the mice actually see? To answer this question, eight weeks after injury the researchers showed the mice a rotating drum painted with vertical black and white stripes. A normal mouse naturally turns its head to follow the stripes. The mice with regenerated nerves didn’t budge, indicating that they couldn’t see.

He realized that this failure to restore sight happened because the freshly grown nerves differed in a key way from normal nerves: They lacked insulation, so electrical signals from the eye diminished before reaching the brain.

This, He knew, is the exact same problem as is seen in the nerves of people with multiple sclerosis. So the researchers gave these same mice the MS drug 4-AP, and three hours later tested them again. Suddenly the animals started moving their heads in response to the rotating drum. Blind mice could once again see. 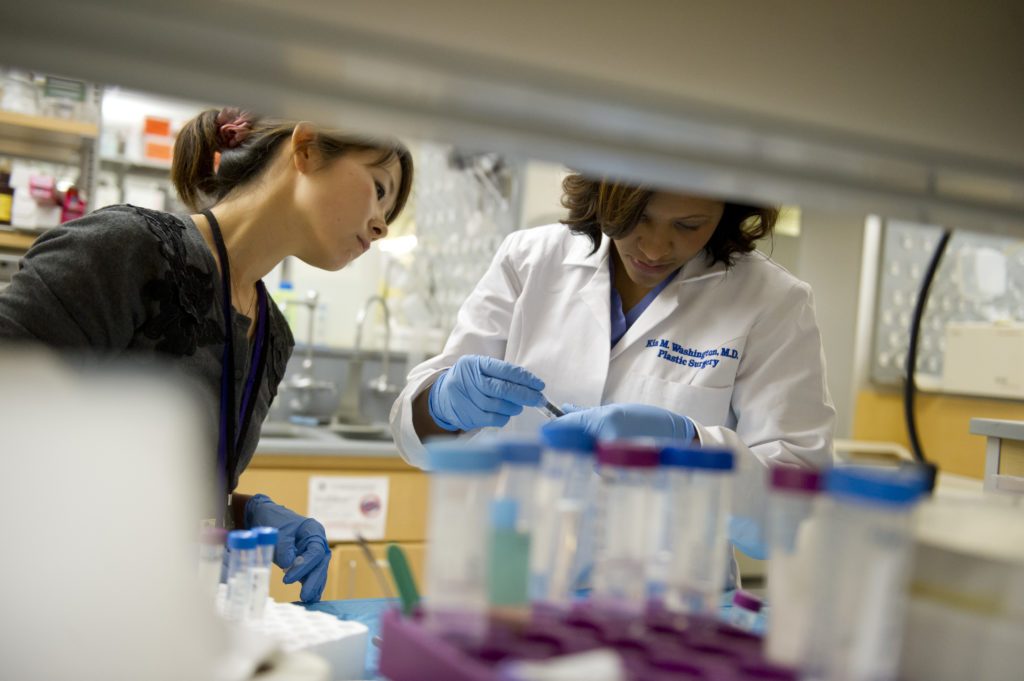 PITTSBURGH- November 16: Dri Kia Washington and Dr. Chiaki Komatsu , plastic surgeons at the University of Pittsburgh Medical Center pioneering the research into whole eye transplants, inspect an eye and optic nerve of a rat in their lab. Photo by Jeff Swensen/STAT News

Accomplishing a similar feat in humans could be possible within 10 years, said Stanford associate professor of neurobiology and ophthalmology Andrew Huberman, who is not involved with Washington’s research. But he says that it’s a route that makes less sense than using newer additions to the biomedical toolkit.

“I don’t think we’re just going to take an eye from a recently deceased person and put it on someone else … and that person’s going to see,” Huberman said. “I think it’s going to be a combination of biologics and engineering” — like, for instance, combining a donor eye with neural stem cells.

If scientists were able to grow a new retina on the donor eye from stem cells, Huberman said, those fresh retinal neurons might more easily grow projections that can stretch all the way to the brain.

Regardless of the approach, many challenges lie ahead. Nickells has been working with mice whose optic nerves were crushed, so it remains to be seen whether the same principles will work when the nerve is cut. And He’s team has been able to regrow the rodent optic nerve at most 1 centimeter; by comparison, the distance from the eye to the brain in a human is a chasm.

For Washington, the next steps involve finding noninvasive ways to monitor possible rejection of the donor eye in both rats and primates. This will prevent her from having to biopsy the eye to look for rejection, which is the standard way to monitor other kinds of transplants. Once she identifies rejection, she wants to see how the eye responds to the standard immunosuppressive drugs.

The first human recipients of whole eye transplants, Washington predicts, will be those already slated for a face transplant. Many of these patients are blind and will have to take immunosuppressive drugs regardless, so the risk versus reward ratio of transplanting the eye is very low.

And despite the hurdles ahead, Washington believes transplantation is the best way forward in treating vision loss from eye injury. “Particularly in the traumatic setting, it’s really about being able to restore form and function combined in one procedure.”

Erin Hare is a freelance science writer in her final year of a neuroscience PhD program at the University of Pittsburgh. This article is reproduced with permission from STAT. It was first published on Nov. 23, 2016. Find the original story here.

Left: An eyeball with whole attached optic nerve of a rat in the lab of Dr. Kia Washington, a plastic surgeon at the University of Pittsburgh Medical Center pioneering the research into whole eye transplants. Photo by Jeff Swensen/STAT News