Residents of this city already worried about the coal-burning plant nearby. Then came Hurricane Maria.

Even before Hurricane Maria became the worst natural disaster to ever hit Puerto Rico, people on the island were already struggling with health issues that the destruction may have exacerbated.

Aldwin Colón, who has lived in the Miramar community in the southeast industrial city of Guayama for 40 years, told NewsHour Weekend that he was diagnosed with cancer in his right kidney in 2013.

“They removed part of my kidney and I started looking for causes. I was a smoker, so I was also responsible for some risk, but while I was sick, I started to notice that people in my neighborhood were going to the same doctors I was seeing,” Colón said.

Then about two years ago, his teenage daughter was sent to surgery for abnormally large abscesses on her skin.

Colón had already started to wonder if the source of their suffering could be a coal-burning power plant nearby, which produces 220,000 tons of coal ash each year. The ash is converted into construction material by mixing it with water, then stored at the plant in a 120-foot high mound. Residents say they inhale or ingest traces of it as wind carries it into their communities, covering their trees, houses, cars and land with thin veils of coal ash residue.

AES, an energy company based in Virginia that owns the plant, also markets the ash as a replacement for concrete. It has been used in roads and construction sites across the island.

Between 2004 and 2012, at least 33 sites on the island used more than 2 million tons of Agremax for construction, according to the U.S. Environmental Protection Agency.

There is no proven link between coal ash and health problems among residents of Guayama, and AES and the EPA have maintained that coal ash is not a health hazard.

But when Maria hit on Sept. 16, it brought a whole other slew of potential problems. 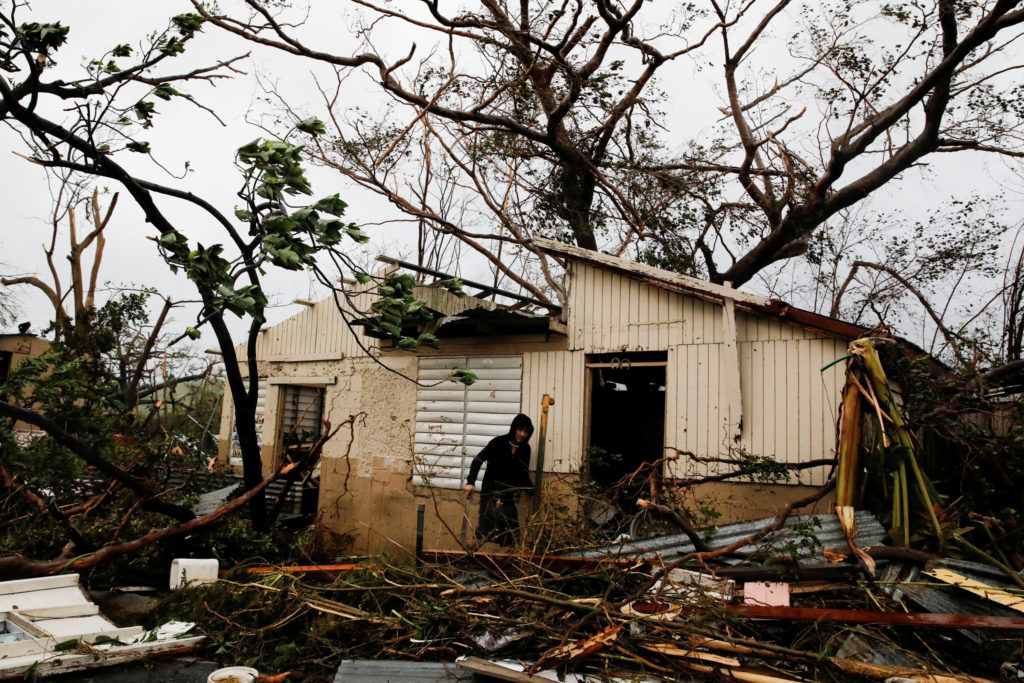 A man looks for valuables in the damaged house of a relative after the area was hit by Hurricane Maria in Guayama, Puerto Rico September 20, 2017. Photo by Carlos Garcia Rawlins/Reuters

Dr. Luis Bonilla Soto, an environmental researcher at the University of Puerto Rico School of Public Health, worried about how the coal ash was affecting the groundwater, citing an EPA-commissioned analysis of Agremax by Vanderbilt University from 2012. It found that arsenic, boron, chloride and other substances from the ash could leach into water at over a 100 times the levels the EPA considers acceptable for drinking water.

Last month, AES released its most recent groundwater monitoring report, showing that between Sept. 12 and Oct. 4, levels of arsenic, chromium, and two radioactive isotopes had increased in groundwater near the coal plant’s large mound of Agremax.

NewsHour Weekend talked to Bonilla Soto about the public health issues and how Maria heightened fears of irreparable contamination.

What did you do when you learned that the coal ash from AES might be having an effect on residents’ health?

I carried out a survey of the prevalence of chronic diseases in the community and visited. We went through the plant, we took photos and we have been gradually collecting evidence of the great environmental impact that this plant is having on the environment and the health of the people.

What have you found?

There was a student group from the school of statistics and epidemiology. In the summer of 2016, they did a survey in the community in terms of the prevalence of chronic diseases, respiratory diseases, cardiovascular diseases, skin diseases, diabetes, to see what they found. We wanted to duplicate that work using the same methodology, visiting the same communities to see if in two years, it had changed. The median age of this group was 64 years. And obviously this is a community of low socioeconomic level and, unfortunately, given this situation, they are also suffering the double burden, not only of the difficult economic situation, but also of the environmental contamination of the AES plant. 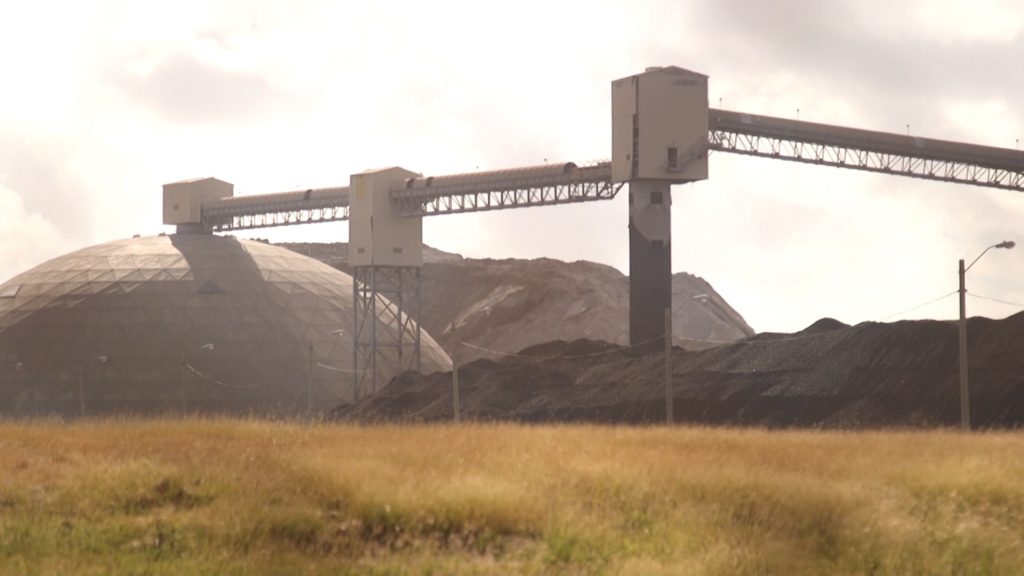 Puerto Ricans in Guayama say particles from this 120-foot high mound of coal ash mixed with water covers their homes and may be the cause of elevated public health issues. Photo by PBS NewsHour Weekend

The cases of cancer, all types of cancer, which had in the community a prevalence of 4.3 percent, increased to 9.8 percent, an increase of 5.5 percent.

How much of this information can we say definitively is the result of AES presence in the community?

In general terms, what has to do with respiratory and cardiovascular diseases, except hypertension, and skin diseases, and some types of cancer, [could be] related to pollution of AES, because they represent the greatest source of pollution there. They produce about 800 tons of coal ash per day, which are highly toxic, filled with heavy metals and there is a particulate that the wind carries from that pile of ash that they store next to the plant. The wind disperses that same ash.

People have noticed it in their fruit trees, they have noticed it in their windows, full of gray dust of the ash and also of the black powder of the crushed coal, because they crush the coal to burn it more efficiently and both types of particulate are stuck to the walls, the windows, the floors of the houses. This means that people have to be cleaning too often. That plant is practically less than a mile from Miramar and other communities. And, basically, they’re in the direction where the wind blows most.

How did Hurricane María contribute?

María, which was the strongest hurricane that covered the whole island, it brought intense rains. In a few weeks fifteen inches of rain fell and, obviously, all those heavy metals that are in the ash are soluble in water, and with that rain, because the rain infiltrates the ash, leaches and that percolates through the subsoil and pollutes the aquifers.

There was a lot of scientific evidence that these ashes were going to contaminate the water wells that are in their area, because that has happened for decades in the United States. And here, about 5 percent of the community takes water from the wells. It was already found in the most recent compliance report that those wells are already contaminated with arsenic, molybdenum, selenium and heavy metals that affect health and, above all, arsenic that can cause several types of cancer such as skin cancer, lung cancer, liver cancer, of the lymphatic system.

Once an underground water supply like this is contaminated, the contamination is forever, because there is no way for you to clean an aquifer.

Aside from the research that you’re mentioning, are there any other empirical, peer-reviewed studies that show direct correlation?

With regard to these particular communities, I do not know of any.

What needs to be done?

Here in Puerto Rico, legislation should be passed that does not allow the generation of coal-based energy. We are an island and we cannot afford that luxury, because of the pollution it is generating and because we have no place to store those ashes, and we are unnecessarily exposing people and putting their health and lives at risk.

This interview has been translated from Spanish to English and has been edited for length and clarity.

Left: Residents of Guayama, home to Puerto Rico’s only coal-burning power plant for 15 years, have been diagnosed with cancer, heart and respiratory diseases that they fear are related to coal ash exposure. Ivette Feliciano reports on the concerns of Puerto Ricans who say the situation grew worse after Hurricane Maria.

As part of the associate producer "Dream Team" (as they refer to themselves) at NewsHour Weekend, Zachary Green produces and assists in the production of many of the segments featured on NewsHour Weekend. This includes shooting, writing, and editing such pieces as "No Comment" and "Digital Death". Before joining NewsHour, Zachary was an associate producer for Need to Know on PBS.