‘Are you saying I’m dying?’ Training doctors to speak frankly about death

NASHVILLE, Tenn. — The doctor pulls up a chair next to his patient, a 74-year-old woman with lung cancer. He tells her she doesn’t need more chemotherapy. Her eyes perk up; has she beaten her cancer? As it turns out, no. Her cancer has metastasized. She only has six months to live, at most. But her doctor is unable to find the right words.

“My cancer’s not gone? I thought it was getting better,” the patient says, bewildered.

“So, no further treatment?”

“I think we need to focus on quality [of life] over quantity.”

“Are you saying I’m dying?”

From the other side of a two-way mirror, Anna-Gene O’Neal listens closely. She’s set up this simulation — the prognosis is part of a script; the patient is an actor; the physician is being recorded — to improve the way he broaches the topic of death with real patients. O’Neal hears the mock patient all but pleading with the doctor to give her a direct answer. He struggles to do so. After a few minutes, she opens the door to end the simulation.

O’Neal, who runs Alive Hospice here in Tennessee, launched the SHARE simulation lab last year. Participants run through four scenarios. The actors playing patients reply with all the emotions — confusion, denial, anger, grief — that doctors might encounter in real exam rooms. Afterwards, O’Neal sits with the doctors as they watch tape of these interactions on a big-screen TV.

Faced with the uncomfortable task of discussing death, doctors often avoid the topic. Only 17 percent of Medicare patients surveyed in a 2015 Kaiser Family Foundation study said they had discussed end-of-life care — though most wanted to do so. Since that study, Medicare has begun reimbursing providers for having these conversations. Yet still, just a fraction of Medicare recipients at the end of life have those talks with their doctors.

READ NEXT: I was confident in my patient’s end-of-life care. Then my senior doctor overruled me

In response, advocates for improving end-of-life care have launched training sessions for doctors around the country.

In California, Stanford’s palliative medicine department has trained dozens of hospice nurses using exercises similar to those carried out here by Alive. In New York, oncologists at the University of Rochester Medical Center observe their peers having conversations with real patients facing terminal illness. In Arizona, the administrators of Phoenix-based Hospice of the West hold regular training sessions, complete with small group discussions, at staff meetings.

Simulators with live actors have intuitive appeal, especially since doctors rarely get hands-on experience with these tough conversations in medical school. But Dr. Scott Halpern, director of the University of Pennsylvania’s Palliative and Advanced Illness Research Center, said there’s little evidence that simulators are any more effective than any other clinical training to improve end-of-life counseling. They show a “tremendous amount of face validity,” he said, but they must be held “to a standard of showing benefits for patients, not a standard of an appealing anecdote.”

O’Neal, 50, agrees more evidence is needed. But she’s also so gung-ho about her simulator that she’s pushing to expand it across the country. Four health organizations — including faith-based Ascension Health — have agreed to let Alive train their clinicians. Later this year, O’Neal plans to work with medical students at one school in Tennessee. Down the road, she hopes to get some independent practice associations to require their members to undergo her training.

“It’s about doing the right thing,” O’Neal said. “I feel strongly that if you do the right thing by people, they’re going to make different decisions.” That shift could lead to more of what she calls “good deaths,” with patients fully aware of their prognosis and able to choose whether they want aggressive, long-shot treatments or would prefer to simply have their pain managed while they spend their final days with friends and family.

Not only could that benefit patients, O’Neal said, but it could save taxpayers big money: “The financial impact on health care will be monumental.” 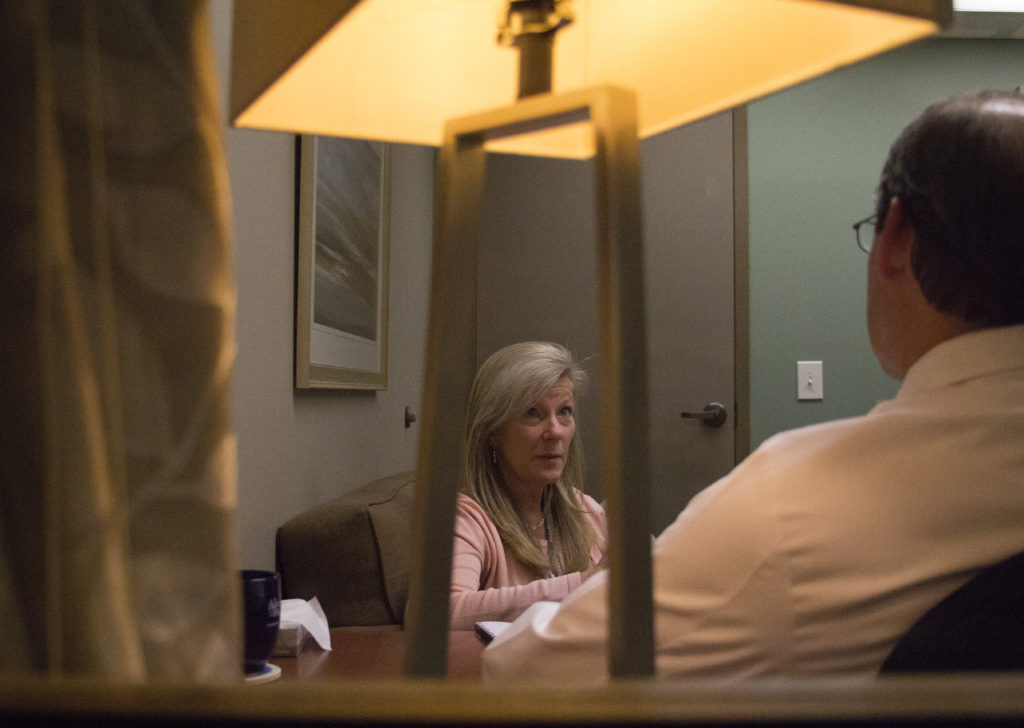 Alive Hospice CEO Anna-Gene O’Neal chats with a doctor who went through a simulated scenario about how he can improve his communication with patients. Photo by Joon Powell/STAT

The little things that can make a big difference

Two of O’Neal’s closest friends died young from breast cancer. Seeing their hospice nurses bring light to the darkness of death prompted O’Neal to think back on her own professional experiences caring for babies as a neonatal nurse and for the elderly as a health care executive. What stood out: the power of clear, concise communication between clinician and patient.

O’Neal came to believe health providers in all specialties should be trained to have such direct conversations. In 2012, she was hired as CEO of Alive Hospice, a nonprofit chain of hospice care facilities serving more than 3,500 patients and families a year in central Tennessee. She soon realized that many Americans lived in “a crisis of denial of our own mortality,” in part because “medical institutions encourage us to never give up.”

So she launched the SHARE simulator. Clinicians pay to participate — $350 to work through four scenarios and then watch the videos and get feedback from O’Neal or her staffers. (To give doctors more privacy, Alive deletes the footage after each session, handing them the only copy so they can review it later if they’d like.)

The work unfolds in a low-slung brick building near Nashville’s Music Row, in a room that looks like a typical hospice or hospital room, set up with a bed, a couch, a box of tissues, and a stack of travel magazines. Tiny microphones dangle from the ceiling to record audio without intruding on the intimacy of conversations. Video cameras shaped like domes are mounted on the walls.

So far, O’Neal has trained 12 doctors and 65 other clinicians, including nurses and social workers. O’Neal said some have already tweaked their communication style: Maybe they’re more comfortable with long pauses after breaking hard news to patients, or more aware of body language that may come off as too stern.

“Watching yourself, you get a feel for your posture, whether you’re using specific phrases, looking a person in the eye, or keeping focus on them,” said pulmonologist Dr. Richard Fremont. “It was helpful seeing what I thought I was doing.”

Dr. Robert Taylor, a nephrologist based in Nashville, initially found the cameras in the training room unnerving. But the actors quickly pulled him into the scenario.

“It’s awkward to see yourself,” he said, describing the experience of watching the footage later. But he noticed little things, like his posture and the inflection in his voice. When he saw the mock patients’ reactions, he realized that little shifts in his own approach could change their perception of the conversation.

READ NEXT: My sister made her end-of-life wishes clear. Then dementia took hold

Taylor said he’s been committed to frank discussions with patients ever since he recognized, early in his career, that dialysis patients rarely got a full picture of their options. Their doctors were often focused on keeping them alive. But the disease and the treatments often make them “so fatigued that it’s not the quality of life they desire,” he said. Ever since, Taylor said he’s taken pains to better communicate all options to his patients; he wanted to go through the simulator to hone that delicate art. “It can alter what you do,” he said, “but also confirm your answers.”

O’Neal said the simulator challenged other doctors’ views that a patient’s death must inevitably be viewed as a failure.

“Once you get doctors into the training, you create an opportunity for them to be vulnerable and see themselves differently,” O’Neal said. “Whether they admit to change or not, they will change.”

A political divide over end-of-life conversations

When the idea of paying doctors to talk about dying was first debated – during the early, bitter fights over the Affordable Care Act in 2009 – conservatives warned that such conversations could be a pretext for pushing the frail and elderly to give up on treatment. Former Alaska Gov. Sarah Palin said funding of end-of-life counseling amounted to a “death panel.” Iowa Sen. Chuck Grassley said it could enable “pulling the plug on grandma.”

The debate still rages: Earlier this year Iowa Rep. Steve King introduced the Protecting Life Until Natural Death Act, which would end federal reimbursements for end-of-life discussions. King has described such conversations as “intolerable to those who respect the dignity of human life.”

A spokesman for King did not respond to a STAT request for an interview.

But despite such efforts, O’Neal sees growing support for her approach on Capitol Hill. Last month, a bipartisan group of lawmakers — including Democratic Sen. Mark Warner of Virginia and Republican Sen. Johnny Isakson of Georgia — filed a bill that would provide $50 million to fund access, education, and training related to end-of-life treatment for terminally ill patients.

“Encouraging patients and their families to have these conversations with their physician helps provide peace of mind and undoubtedly increases the likelihood a patient’s care will be consistent with their wishes,” Tennessee Congressman Phil Roe, one of the bill’s sponsors, said in a statement.

O’Neal concurs: Such conversations, she said, empower patients to embrace death on their own terms — and can make those final days “the most meaningful part of the human experience.”

“If somebody’s faith is such that as long as there’s a beating heart, you keep doing everything, we’re 100 percent behind that,” she said. “But if someone says, ‘if I can’t walk to play 18 holes of golf, I’m done,’ we have to respect that as well.” 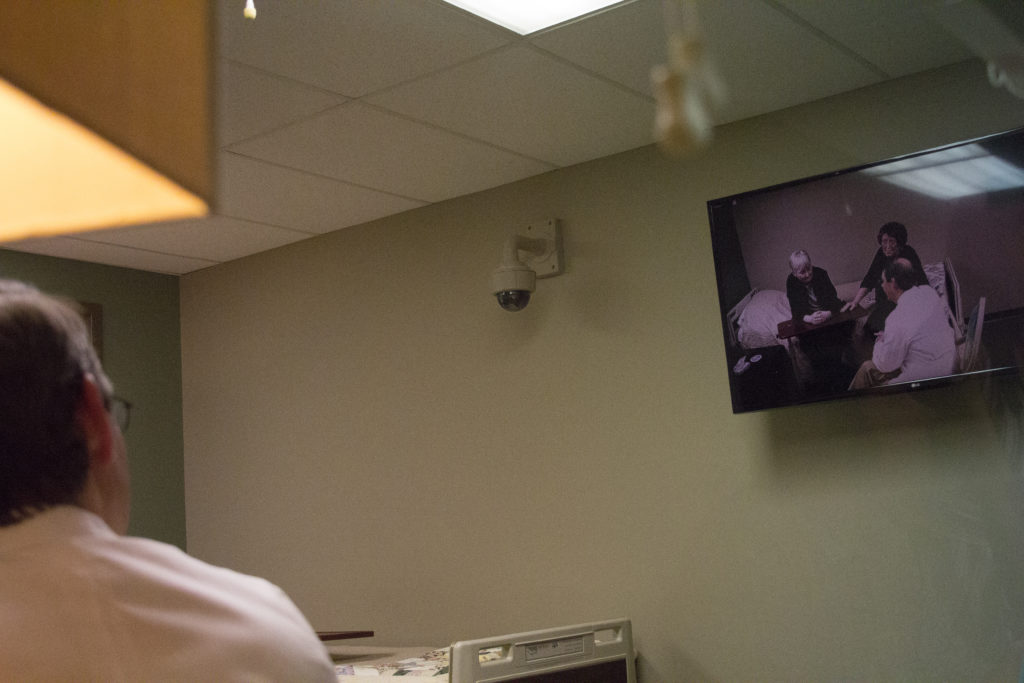 A doctor, sitting inside Alive’s training room, watches footage of his interaction with a patient and her daughter. Photo by Joon Powell/STAT

O’Neal asks one of her staffers to turn on the big-screen TV in the simulator room so the doctor can review his performance with the 74-year-old patient. As the footage rolls, the doctor grips one of the arms of his chair, bearing a slight grin of discomfort as he watches his fumbling attempts to tell the mock patient she’s dying. Soon, he’s critiquing himself:

“I would’ve been more blunt …”

“That could’ve been done faster …”

After he’s finished, she chimes with nuggets of advice: Don’t let her chase answers. Communicate like it’s a conversation. Honesty is a form of compassion.

The second scenario goes far better. In it, the same patient returns two weeks later with a slew of strange treatment suggestions a relative found on the internet, including a raw beet diet and blood transfusion at a clinic in Juarez, Mexico. The doctor listens intently, careful to let her finish, mindful of his body language.

After she’s done, he leans forward and steers the conversation in another direction. He makes eye contact.

Then, he says in a calm empathetic tone: “We need to start thinking ahead.”

This article is reproduced with permission from STAT. It was first published on July 14, 2017. Find the original story here.

Left: Two employees from Alive Hospice take on acting roles as a terminally ill patient and a family member as part of a training simulation to help a doctor learn to speak openly about end-of-life care. Photo by Joon Powell/STAT