WASHINGTON — The Senate’s top Democrat on Sunday called on the Department of Veterans Affairs to explain why it allowed the use of an unproven drug on veterans for the coronavirus, saying patients may have been put at unnecessary risk.

Sen. Charles Schumer of New York said the VA needs to provide Congress more information about a recent bulk order for $208,000 worth of hydroxychloroquine. President Donald Trump has heavily promoted the malaria drug, without evidence, as a treatment for COVID-19.

Schumer’s request comes after a whistleblower complaint filed this past week by former Health and Human Services official Rick Bright alleged that the Trump administration, eager for a quick fix to the onslaught of the coronavirus, wanted to “flood” hot spots in New York and New Jersey with the drug. Major veterans organizations have urged VA to explain under what circumstances VA doctors initiate discussion of hydroxychloroquine with veterans as a treatment option.

“There are concerns that they are using this drug when the medical evidence says it doesn’t help and could hurt,” Schumer said in an interview with The Associated Press.

He said given the fact the malaria drug, despite being untested, had been repeatedly pushed publicly by Trump, VA Secretary Robert Wilkie must address whether anyone at the department was pressured by the White House or the administration to use hydroxychloroquine for COVID-19. 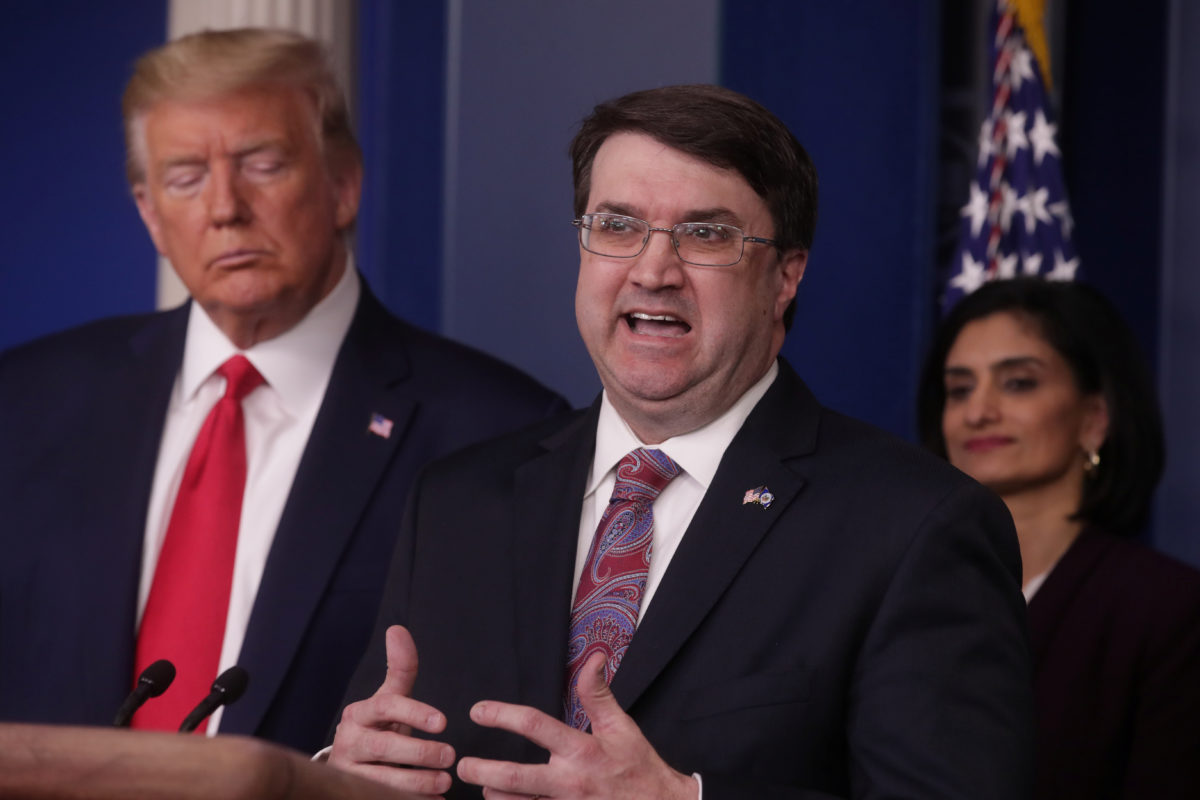 Schumer said Wilkie also should answer questions about a recent analysis of VA hospital data that showed there were more deaths among patients given hydroxychloroquine versus standard care, including how much patients knew about the drug’s risks before taking it.

Wilkie in recent weeks has denied that veterans were used as test subjects for the drug and that it was instead administered at government-run VA hospitals only when medically appropriate, with mutual consent between doctor and patient.

Still, Wilkie has repeatedly declined to say how widely the drug was being used for COVID-19 and whether the department had issued broad guidance to doctors and patients on the use of the drug.

In a weekly call with veterans’ groups this past week, Wilkie continued to defend VA’s use of hydroxychloroquine. He dismissed the recent analysis of VA hospital data showing no benefits to patients, suggesting the poor outcomes were because the cases involved older, very sick veterans. He has not said whether the department will continue to use the drug.

“Use of this medication for treatment of COVID-19 is considered ‘off label’ — perfectly legal and not rare,” he wrote in an April 29 letter to veterans’ groups.

The analysis of hospital data, done by independent researchers at two universities with VA approval, was not a rigorous experiment. Researchers analyzed medical records of 368 older male veterans hospitalized with confirmed coronavirus infection at VA medical centers who died or were discharged by April 11.

About 28% of veterans who were given hydroxychloroquine plus usual care died, versus 11% of those getting routine care alone.

The VA recently said most of its recent bulk order for hydroxychloroquine was being used for approved uses, such as treating lupus and rheumatoid arthritis, but it didn’t provide breakdowns.

Wilkie in recent weeks took advocacy of the drug even further than Trump by claiming without evidence that it has been effective for young and middle-aged veterans in particular. In fact, there is no published evidence showing that. 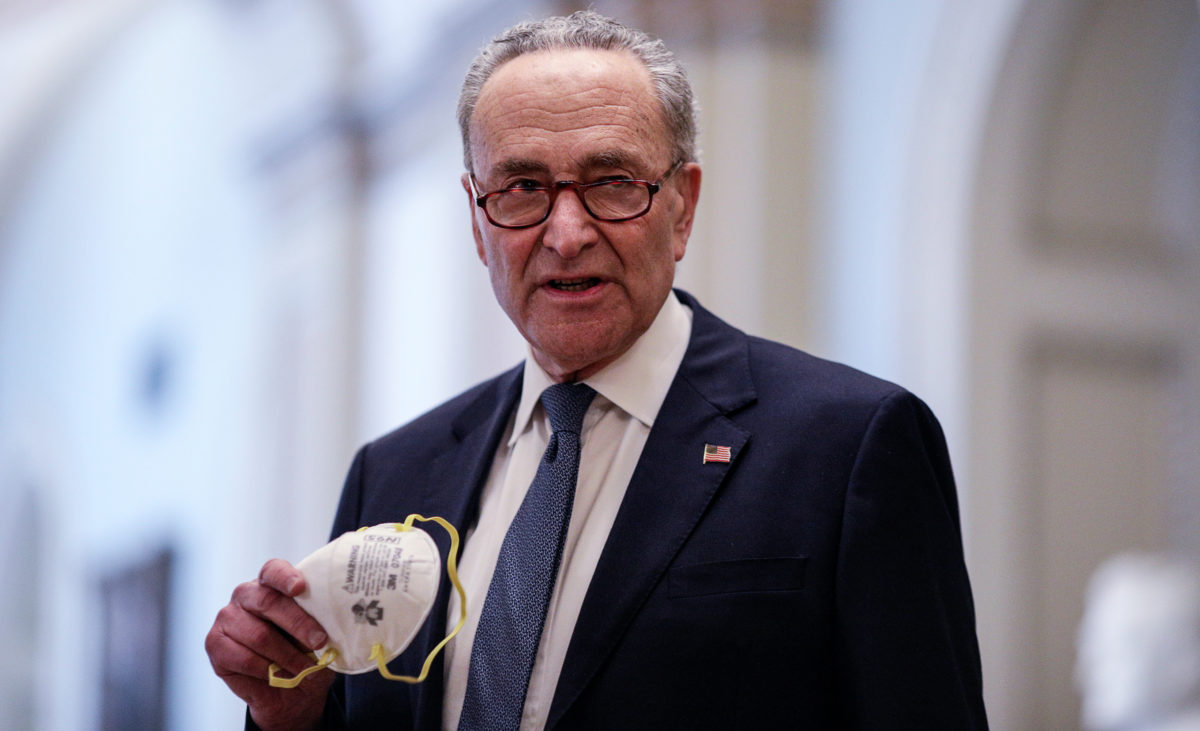 U.S. Senate Minority Leader Chuck Schumer (D-NY) carries his face mask as he arrives inside the U.S. Capitol after it was announced U.S. congressional leaders and the White House agreed on nearly $500 billion more in coronavirus relief for the U.S. economy, bringing to nearly $3 trillion the amount allocated to deal with the crisis, in Washington, U.S., April 21, 2020. REUTERS/Tom Brenner

Veterans are “very concerned that we still do not have clarity on the VA’s past and present use of hydroxychloroquine in treating veterans with COVID-19,” Jeremy Butler, chief executive officer of Iraq and Afghanistan Veterans of America, told the AP.

“Now that the federal government issued an emergency use authorization for remdesivir to treat COVID-19, we need answers to these questions as well as the VA’s plans for administering, or not administering, remdesivir,” he said.

In a tweet Sunday, former VA Secretary David Shulkin urged the department to immediately curtail use of hydroxychloroquine for COVID-19. “With studies showing no benefit, VA should restrict use exclusively to clinical trials,” he wrote. Shulkin was fired by Trump in March 2018, and Wilkie replaced him.

Schumer said his main concern is determining whether the VA had conducted any “clandestine studies to determine whether hydroxychloroquine was effective without their permission.” He said there’s also concern that the department won’t address specifically where the drug was sent or how it’s being used.

“These are people who risked their lives for us,” Schumer said. “They should be treated only with the utmost dignity, respect and high standards of care.”

The drug has long been used to treat malaria and other ailments. A few, very small preliminary studies suggested it might help prevent the coronavirus from entering cells and possibly help patients clear the virus sooner. But the Food and Drug Administration last month warned doctors against prescribing the drug for COVID-19 outside hospitals because of the risks of serious side effects and death.