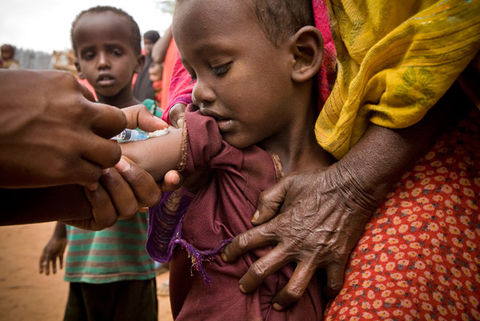 An auto-disable syringe is used to vaccinate a child in Kenya. Photo by UNICEF/Siegfried Modola.

A nurse injects a patient with a syringe of antibiotics, reloads and moves on to the next patient in line. The syringe isn’t sterilized, the needle is not replaced, and the patient is at risk of contracting a disease from the very shot that is supposed to cure him.

It’s a disturbing scenario, and one that plays out each day in many poor countries. About 40 percent of all injections are given with unsterilized, reused syringes and needles, reports the World Health Organization. An estimated 1.3 million deaths — and 21.7 million new Hepatitis B infections — occur each year as a result of the unsafe practice.

To prevent this from happening, organizations like UNICEF and the WHO have moved to syringes that “self destruct” after one use to protect patients from contracting blood-borne diseases. The devices, called auto-disable syringes, jam up after one injection and can’t be reused. The casing is engineered to break if someone tries to forcefully refill it.

View a diagram of one auto-disable model below, which locks the plunger after one use with a metal clip. Other models feature a breaking plunger, which cracks the syringe once it is used.

Now, Tanzania has committed to becoming the first country to exclusively use auto-disable syringes.

Edward Hoekstra, a senior health and measles vaccine specialist at UNICEF, welcomed the news from Tanzania, but said the problem is still widespread. UNICEF has been using only auto-disable syringes for all its preventative child immunizations, but the vast majority of injections each year are for treatment of disease and are harder for governments to regulate.

Hoekstra recalls watching a line of 20 children vaccinated with a disposable syringe and needle in a rural health clinic in China prior to the switch to auto-disable child vaccines.

“In developing countries, you only pay 5 cents for a syringe but their incomes might be 1 dollar a day. So if you have 20 kids that you vaccinate with one syringe then you have a doubling of your income,” he said. “It’s dubious if people will make the right decision.”

Regular disposable syringes can also make their way back into the marketplace after being used. People will take syringes from a health clinic’s trash, wash them and repackage them for resale.

“You can find in a market a perfectly well packed syringe, then you look closely and you can still see some blood in the syringe from the last person,” he said.

An investigation in India in 2009, reported in the Lancet, found warehouses filled with syringes and needles recovered by waste-pickers and repackaged to be sold on the black market.

Most modern syringes are made of plastic, and even if the needle is replaced, bits of blood can be retracted into the syringe and passed on to other patients. The syringe itself can’t be sterilized and is intended to be disposed.

By eliminating the ability to reuse the syringe, a used auto-disable syringe can’t be resold. But concerns have been raised about the amount of medical waste generated by auto-disable syringes, and the need for safe waste removal plans. Hoekstra said vaccines in general generate a huge quantity of medical waste from the millions of children immunized in countries around the globe each year. Waste boxes are distributed with all auto-disable vaccines, and the syringes are usually incinerated or dropped in strong sterilization chemicals, depending on the location.

He points to innovation in the engineering of the syringes as one of the solutions, the next evolution in products designed to solve this health dilemma. New auto-disable syringes are being designed to use less materials, create less waste and fit more vaccines into each shipment. Manufacturers save money on materials, and are offering the devices at no extra cost.

“It is a win-win situation,” he said.