In Senegal, a Movement to Reject Female Circumcision

The practice of “female circumcision” is widespread, affecting an estimated 140 million women worldwide. It is also unspoken. Even its euphemisms evoke images too uncomfortable to talk about in some social settings.

The societies in which the practice occurs — a swath of Africa from Senegal to Egypt, plus pockets of west and south Asia — are traditional, patriarchal and conservative. They also are predominantly, but only coincidentally, Islamic. The partial or complete removal of the clitoris, female genital mutilation in United Nations parlance, dates back 2,000 years, and it is practiced in both faiths in the region.

Attempts have been made from time to time to stamp out the practice: by missionaries in colonial times, U.N. proclamations, even laws to ban it, all to little effect. From all this history, Molly Melching, founder of an organization in Senegal called Tostan, derived a lesson. 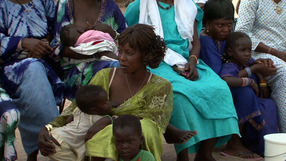 “Tostan found that using approaches that shame or blame people really was just the opposite of what would work in changing social norms,” Melching said.

In the two decades since Tostan — which means “breakthrough” in the local Wolof language — began using a human rights education approach, almost 5,000 villages in Senegal have abandoned the practice of female genital cutting, she said.

Melching is a Danville, Ill., native, who has lived in the west African nation for more than three decades. Her words are carefully chosen to be neutral. The practice of cutting, not mutilation, has been largely abandoned, but not totally eradicated. The latter also implies that local communities themselves make this decision on their own initiative.

Tostan’s staff and volunteers, all drawn from local communities, hardly mention cutting, certainly in the outset. Instead, they rely on an expansive education program of seminars conducted in the villages on human rights, including the right to good health. In time, people learn about germ transmission and how complications suffered by so many women during childbirth can be traced back to the cutting that occurred during their childhood, Melching explains. All this leads to community discussions that examine the origins of the practice, with surprising results in most cases.

For one thing, people learn there’s no religious requirement for cutting. It is thought to have originated in the concubines of ancient rulers as a sign of a woman’s “virtue” or a means of controlling her fidelity and sexual appetite. The procedure has always been performed by women “circumcizers.”

Melching says religious leaders, many of whom have personal recollections of a female relative who suffered, have been supportive in all but the most conservative regions. They are especially appreciative of being consulted first.

Tostan’s message to the communities is respectful, non-judgmental and simple: we know you want to do what’s best for your daughters’ future. It is sensitive to the fact that from the community’s perspective, girls who are not cut are likely to be ostracized and unable to find marriage partners. That makes it critical that large numbers of communities — the marriage pool — abandon the practice collectively. Tostan helps coordinate, organize and raise the funds for such declarations — gala events attended by thousands of people from hundreds of villages:

“One part of bringing about a change like this is to get everyone to change at once, what we call coordinated abandonment. Everyone has to see that everyone else sees that everyone is changing,” says University of California, San Diego, professor Gerry Mackie, who has closely studied Tostan.

There are instances in history for this kind of massive shift in social norms. Women’s feet were once bound in China, but the practice was abandoned in barely a generation. And there’s a more recent example Melching notices when she returns to America: cigarette smoking was common and widespread when she left in the 1970s, but with increasing awareness of the health consequences, it has become widely unacceptable today.