Monday marks the 129th birthday of the Nobel and Pulitzer Prize-winning playwright Eugene O’Neill. Long before he sat down to compose the dramas that have long enlightened and haunted audiences, O’Neill contracted tuberculosis, and like most people suffering serious illnesses, it forever changed him.

In O’Neill’s case (as I wrote several years ago in the Journal of the American Medical Association), the infection was a transformation that enabled him to divine his genius and artistic soul.

O’Neill was the son of a famous actor, James O’Neill, who was constantly touring in plays on the road. As a result of his family and personal history, he famously complained during his last hours of life, “Born in a hotel room and died in a hotel room.” (Indeed, on Nov. 7, 1953, at the age of 65, he did die in a hotel room, the Shelton Hall in Boston.)

Years earlier, sometime in the fall of 1912, a 24-year-old O’Neill developed a “bad cold” accompanied by tonsillitis that refused to resolve. In the following weeks, he began coughing up blood and developed pleurisy. By Thanksgiving his physician determined that Eugene was suffering from tuberculosis, which in the decades leading up to World War II was the leading cause of death for Americans aged 20 to 45 years.

When it came to tuberculosis, like so many other aspects of life, some seemed to randomly draw the short straw.

O’Neill’s diagnosis of tuberculosis was, of course, recounted in his masterpiece “Long Day’s Journey Into Night.” Less well known is that one of his earliest plays, “The Straw,” was drawn from his experiences as a patient in a tuberculosis sanatorium. Aptly, O’Neill used the metaphor of the children’s game of drawing straws for his title: When it came to tuberculosis, like so many other aspects of life, some seemed to randomly draw more short straws than others.

Written between 1918 and 1919, and set in 1910, “The Straw” depicts a love affair between two patients — a young reporter named Stephen Murray and a young woman, Eileen Carmody — with tuberculosis and markedly different fates. Aside from its literary merit, the play faithfully documents the daily routines of an early 20th-century tuberculosis sanatorium.

In real life, Eugene’s father initially elected to send his son to the Fairfield County State Tuberculosis Sanatorium, in Shelton, Connecticut, a few miles from New Haven. Those who could afford it were charged $4 a week; those who could not were admitted free of charge and supported by the state.

In 1854, a 9-year-old James had immigrated from famine-struck Ireland to the slums of Buffalo, New York. He eventually transformed himself into a successful actor who played on Broadway and across the nation, in roles ranging from Shakespearian leads to, most famously, the Count of Monte Cristo. Yet long after he became relatively wealthy, James O’Neill could never shake off his difficult years of abject poverty and was notoriously tight-fisted. 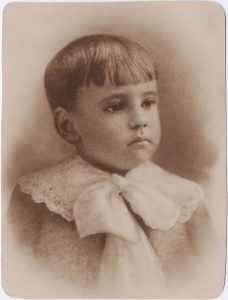 Portrait of playwright Eugene O’Neill as a child. Courtesy of the Beinecke Rare Book & Manuscript Library

Penury aside, the choice of Fairfield suggested that James was not exactly sanguine about Eugene’s chances of recovery. When father and son arrived at the seedy institution on Dec. 9, 1912, they found that the physical plant consisted of little more than a ramshackle clinic building and a smattering of cottages housing exceedingly ill patients. Dressed in a brand new suit that his father had hand-tailored for his son, Eugene was admitted but stayed only two days. Eugene’s low state of mind, combined with an appeal made by his physician, inspired James to cough up the cash and send the young man to a far more “luxurious” facility, the Gaylord Farm Sanatorium in Wallingford, Connecticut.

Regardless of the medical, economic or social circumstances of the patients each facility admitted, the majority of American tuberculosis sanatoria were framed by strict rules on how patients should act, sleep, dress and exercise; what they should eat and when; and even with whom they should and should not associate. Relationships between men and women patients were strictly forbidden.

Patients endured weekly weigh-ins to make sure their disease was being held in check rather than “consuming” their bodies. Those who failed to improve after a trial of the prescribed dietary and fresh-air regimens were often transferred to an “incurables” facility so as not to diminish the “cure rate” of a particular sanatorium, essential to recruiting new and paying customers.

Much of the plot of “The Straw” is based on Eugene’s relationship with another Gaylord Farm Sanatorium patient named Catherine “Kitty” Mackay, who hailed from a working class Irish family in nearby Waterbury. Kitty had been treated at Gaylord for five months a year earlier, but because her mother was dead and she was the principal caregiver for her nine younger sisters and brothers, she was prematurely discharged. When Eugene met her in March of 1913, Kitty was 23 and seriously ill with a TB relapse. O’Neill was attracted by Kitty’s beauty and thirst for knowledge.

READ MORE: The failed Broadway musical I wish every medical student could see

Of note, there were two major infractions at Gaylord that could lead to immediate discharge. The first was drinking alcohol; the second was a love affair between patients. Between his relationship with Kitty and his legendary consumption of alcohol, Eugene broke both these rules but, apparently, with no repercussions.

O’Neill credited his hospitalization with inspiring him to plumb the depths of his psyche, a tool necessary for a life of composing profound dramas.

By May 1913, five months after his admission to Gaylord, Eugene’s weight had increased from 148 to 164 pounds, and his physicians declared him cured. After convincing James that he was no longer a contagious threat, Eugene returned to his family’s seashore cottage, the very home that served as the setting for both of his plays, “Ah Wilderness!” and “Long Day’s Journey Into Night.” He never saw Kitty again. She was discharged six months after Eugene but, according to the Gaylord Farm records, died on May 17, 1915.

Seven months after his release from Gaylord Farm, O’Neill wrote a note of appreciation to his physician David R. Lyman expressing a wish to visit the sanatorium: “If, as they say, it is sweet to visit the place one was born in, then it will be doubly sweet for me to visit the place I was reborn in—for my second birth was the only one which had my full approval.”

Throughout his life, O’Neill credited his hospitalization with inspiring him to plumb the depths of his psyche, a tool necessary for a life of composing profound dramas. In essence, tuberculosis provided O’Neill with a second chance at life, when, as he noted to his physician, “[I] should have been cast down by my fate—and wasn’t.”

Left: Author and playwright Eugene O'Neill in the library of his New York Home. Photo by NY Daily News Archive via Getty Images