Seven Foods You Think Are Healthy But Aren’t

The guacamole tasted “a little spicy.” At least that’s the way Therese Warner described it after taking a bite.

There was no other sign the stuff had been rotting in the back of the refrigerator for nine months, other than a little brown discoloration around the edges. No mold. No bad smell.

The elderly woman had mistakenly plucked the guacamole from her daughter’s “food museum” — a collection of processed food that her daughter, former New York Times reporter Melanie Warner, had allowed to sit around her house for months with the simple goal of watching it rot (or not) after their expiration dates. 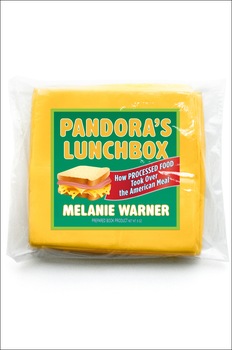 The surprisingly resilient piles of frozen dinners, loaves of bread, processed cheese, hot dogs, pudding and Pop Tarts were all part of Warner’s research for a new book, “Pandora’s Lunchbox: How Processed Food Took Over the American meal.” But she never intended for her family to eat any of it … especially her mother, who was already prone to food-borne illness because of her age.

Immediately, Warner started worrying something terrible would happen to her mom — that she would develop a life-threatening illness and need to be rushed to the hospital. “But she was totally fine, nothing happened at all,” she said. “Not even an intestinal rumbling.”

The secret was on the side of the container, written clearly near the “fresh” sticker applied by the store’s deli workers: In addition to the avocados, tomatoes, yellow onion, jalapeno, cilantro and salt, it also contained a slew of ingredients few would think to add to their homemade guacamole mix — ascorbic acid, citric acid, xanthan gum, amigum and text-instant.

The scientific names in the mix didn’t surprise Melanie Warner. After all, those kinds of ingredients have become familiar to anyone who has flipped over a package of food in recent memory. What shocked Warner was the way some of them are made — and “just how tremendously technical our food production had become.”

Warner’s research, which started as “an earnest attempt to understand the true meaning of labeling on the packages of the foods so many of us eat became a larger journey that brought me inside the curious, intricate world of food science and technology, a place where food isn’t so much cooked as disassembled and reassembled.”

She stopped by the PBS NewsHour recently to talk with Hari Sreenivasan about what she considers to be “processed food,” how it affects the human body and steps people can take to eat a little healthier in a nation where they have become so prevalent.

Watch her full interview with Sreenivasan above. Below are her takes on seven foods she says claim to be healthy but are not.

Seven Foods You Think Are Healthy But Aren’t, According to Melanie Warner

The packages scream nutrition messages at you: “Good source of vitamin D!” “High in fiber.” “Antioxidants.” And for years, we’ve been told that breakfast cereal is a healthy, wholesome way to start the day. But if that’s the case, why is it nearly impossible to find a box in the cereal aisle without an array of synthetic vitamins and minerals added in? The reason: Without help from added nutrients, many cereals would have very little nutrition and wouldn’t be able to make all those salubrious claims.

Cereal processing is damaging to both vitamins and fiber, so much of what exists naturally in the grains — which may not be a whole lot to begin with — often doesn’t survive the journey to your breakfast bowl. To compensate, manufacturers add fiber ingredients and sprinkle in the equivalent of a multivitamin.

Subway has done an outstanding job of promoting itself as the “fresh” and healthy alternative to fast food, and to some extent, these accolades are deserved. Much of the chain’s food has fewer calories, fat and sodium than what you get at McDonald’s and the like. But unless you’re getting a sandwich with nothing but veggies, there’s very little about it that’s “fresh.” Even though Subway bakes its bread inside the stores, it’s definitely not Grandma’s homemade loaf going into those ovens.

The dough is produced in one of 10 large, industrial factories around the country, where it’s loaded up with additives like DATEM (short for diacetyl tartaric acid ester of mono- and diglycerides), sodium stearoyl lactylate, potassium iodate, ascorbic acid and azodicarbonamide. That last one — azodicarbonamide — is known to break down into a carcinogen when heated and is a chemical used in the production of foamed plastics. When a tanker truck carrying this substance overturned on a Chicago highway several years ago, city fire officials had to issue their highest hazmat alert and evacuate everyone up to a half mile downwind. Mmmmm, fresh!

It may sound like you’re doing yourself a favor by cutting down on the excessive sugar so often found in containers of flavored yogurt, but what’s often added in to replace the sugar — namely artificial sweeteners — may be even worse. Aspartame and other chemical sweeteners have been linked to strokes and depression, and there’s little evidence to suggest that they help anyone lose weight. If anything, fake sweeteners can boost our cravings for the real thing.

And light yogurt can have other unwholesome, non-yogurt ingredients like modified corn starches, preservatives and artificial colors. You’re better off getting plain yogurt and adding in your own sweetener like honey or choosing a vanilla-flavored variety, as these often have less sugar than the fruit flavors.

When used in their whole form to make things like tempeh, miso and tofu, soybeans are a nutritious legume packed with fiber, calcium, iron, potassium, folate and several B vitamins. But by the time soybeans become soy protein — the main ingredient in protein bars — nearly everything nutritious except protein has been lost or discarded. More of a food-like product than a food, soy protein sits at the end of a long, complex soy processing chain that starts with the removal of fat from soybeans using hexane, a neurotoxic product of petroleum refining.

And although the FDA allows products that contain a certain level of soy protein to carry a health claim stating that soy protein reduces the risk of heart disease, the American Heart Association says there is no scientific basis for such a benefit and has asked the FDA to revoke this claim.

A strange thing happens when you start trying to remove some of a food’s integral components, in this case the fat in peanut butter. Once it’s gone, you have to replace it with something, otherwise the whole thing won’t taste right. So when manufacturers take out some of the fat to make this supposedly healthier peanut butter, they doctor the product up by adding in more sugar. For instance, simple versions of peanut butter contain two grams of (naturally-occurring) sugar per serving.

Jars of regular Jif have three grams and reduced fat Jif weighs in with four. This is not a good thing because science now clearly shows that sugar is worse for us than fat. Plus, much of the fat found in peanuts happens to be one of the more beneficial ones — it’s monounsaturated, much like that in olive oil.

These drinks may be better than soda, but that’s not saying much. A bottle of regular Vitaminwater delivers a walloping 32 grams of sugar (versus 70 grams in soda). And the origins of all those “reviving” and “immunity” boosting vitamins might surprise you since they’re not coming from anything resembling food. Vitamin B1 starts with a coal tar chemical, B3 is made from a waste product in the production of nylon, and vitamin C starts with a corn-based ingredient called sorbitol. Vitamin D, amazingly, comes from sheep grease.

And although these industrially produced vitamins can be beneficial, most of us are getting plenty of them already, either from vitamin supplements or other fortified foods. What we’re not getting enough of, however, is fiber and antioxidants, which are found abundantly in fruits and vegetables. So you’re far better off drinking water and then eating an orange than chugging a sugary, orange-flavored vitamin pill.

But without whole grains, your gluten-free bread isn’t going to have any (naturally occurring) fiber, B vitamins or antioxidant compounds. For healthy gluten-free foods, look for packages of gluten-free products that list a whole grain, such a brown rice flour, as the first ingredient.

This post is part of PBS NewsHour’s long-running series on food, health and obesity. Previously, we’ve explored whether or not rising obesity in the U.S. is reducing life expectancy, how 50 million Americans live with daily hunger and how a contest challenged student chefs to cook healthy school meals for less than $1 per serving.