Seven Lessons Americans Can Learn From Immigrants to Live Longer

It’s a phenomenon that’s stumped social scientists for years. Hispanics in the U.S. are worse off than their white neighbors by almost every economic measure: poverty rates, dropout rates, access to health care. 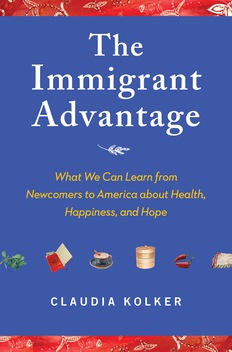 Yet they live longer — two years more than non-Hispanic whites and nearly seven years more than blacks. Other immigrant groups also seem to have better physical and mental health, especially in the first generation after moving to the U.S.

In her latest book, “The Immigrant Advantage, journalist Claudia Kolker looks at how some of the customs imported by America’s newest residents could benefit the rest of the nation.

On Wednesday’s PBS NewsHour, senior correspondent Ray Suarez spoke with Kolker about some of the imported advice — everything from saving money and after-school tutoring to staying healthy after pregnancy — and how those tips can translate to American culture.

Watch an online-exclusive clip from that conversation above, then read Kolker’s take on the seven most valuable things Americans can learn from immigrants.

Top Seven Things Americans Can Learn from Immigrants, according to Claudia Kolker

When penniless Vietnamese refugees poured into this country after the fall of Saigon, they often astounded other Americans by launching successful businesses almost at once. They did it with “friendship loans”: savings pooled at monthly gatherings of a dozen or more friends, each solemnly committed to bringing a set sum at each meeting, no matter what. Each friend knows that one time in the cycle, she’ll get to bring home the whole pool of thousands of dollars, no strings attached, for herself. The one obligation is you must keep paying monthly until everyone’s gotten a turn. Default even once and lose your friends and reputation forever.

Though it’s hard to believe, babies of Mexican immigrants average lower infant mortality in the first day, week and month of life than those of non-Hispanic white women. Back in rural villages, Mexican mothers even seem to avoid postpartum depression, suffered by up to 15 percent of mothers in the United States. What are they doing right? One answer is the “cuarentena” — 40 days of absolutely mandatory pampering for new mothers. In the first six weeks after a baby’s birth, the entire family and community work together to make sure the mother does nothing but rest, relax, eat well and get to know her baby. She’s not allowed to even touch a broom or a dishcloth. The result: a healthy, peaceful mother and, perhaps, a more resilient baby.

The only thing harder than getting a hot meal on the table after work is ignoring all the statistics correlating family dinners with health, good behavior and school success. The pressure is even higher for many Vietnamese, raised to believe that family meals must also have several courses and be fresh — nothing frozen or canned. So they invented “monthly rice,” an incredibly low-cost subscription service for home-made dinners. Talented cooks/entrepreneurs from Houston to California cook ultra-fresh, mouth-watering meals from simple ingredients — and are paid by monthly subscription, like a newspaper. A four-course meal for four? Roughly $10.

While there’s great variety in the lives of Asian immigrants, students of Vietnamese, Korean and Chinese parents really do average better grades in public school. It has nothing to do with luck. Asians come here from cultures where learning how school systems work — and then mastering them — is essential for advancing in life. So many bring an amazing toolbox of skills, including “hagwons” — supplementary classes, often led by an older student, to make a child familiar with new skills before her teacher presents it in class. That extra shot of one-on-one teaching, motivated peers, plus confidence can give a public school education the oomph of private school.

It’s a jungle out there. And while many U.S.-born children of Indians and South Asians don’t want arranged marriages, by the time they’re in the late 20s and 30s, like many other Americans, they’re tired of dating. And their parents are happy to help. Thanks to the widespread practice of “assisted marriage,” parents and close friends put the word out, circulate “biodata” (bare-bones resumes, never too revealing) and most importantly, screen for cads and nutcases. The singles get to choose which candidates they meet and see for themselves if there’s chemistry.

The Little Village barrio in Chicago is poor, largely Hispanic and mostly first- or second-generation. Astonishingly, it’s also got one of the city’s lowest asthma rates — five percent, compared to the average 19-22.2 percent in white and black neighborhoods. Not only that, far more Little Village residents survived a fatal citywide heat wave than residents in the neighborhood just next door. The barrio even has less crime than expected for its income level. The secret? Research shows it may partly be the barrio’s old-fashioned street culture. Hanging out on the stoop or walking to stores creates a mix of socializing and vigilance that seems to have health-enhancing effects for the whole neighborhood.

Jamaicans and other Caribbean immigrants come here with more economic advantages than other immigrants — easier access to visas, higher educational levels, fluent English. So why do so many live with parents well into their 40s? They do it because it makes their lives better. Intergenerational homes boost income so families can live in better neighborhoods with higher-quality schools. They allow young adults to save their money for advanced degrees or cash deposits on houses and surround growing children with more cognition-boosting adult attention. Oh, and they enjoy each other, too. As one Jamaican woman said, “Turning 18 doesn’t mean you have to fall out of love with your parents.”

Claudia Kolker is the author of “The Immigrant Advantage.” As a freelance reporter in El Salvador from 1992-1995, she covered the Salvadoran postwar recovery as well as social issues throughout Central America, Cuba, Haiti and the Dominican Republic. In her adopted hometown of Houston, she has worked as bureau chief of the Los Angeles Times, member of the Houston Chronicle editorial board and deputy director of Robert Wood Johnson Foundation Community Health Leaders. She lives in Houston with her husband and two daughters.