Seven U.S. states now have adult obesity rates of 35 percent or higher, up from zero states just five years ago, according to federal data released Wednesday.

The 2017 data, from the Centers for Disease Control and Prevention, highlight continuing discrepancies in adult obesity rates across geographic areas, race, and education levels.

The seven states with obesity rates of at least 35 percent in 2017 were Alabama, Arkansas, Iowa, Louisiana, Mississippi, Oklahoma, and West Virginia, which itself had the highest rate in the country at 38.1 percent. Colorado had the lowest obesity rate, at 22.6 percent.

Hawaii and Washington, D.C., were the only other places where fewer than 1 in 4 adults were obese.

Overall, the South and Midwest had the highest prevalence of adult obesity, the data showed. 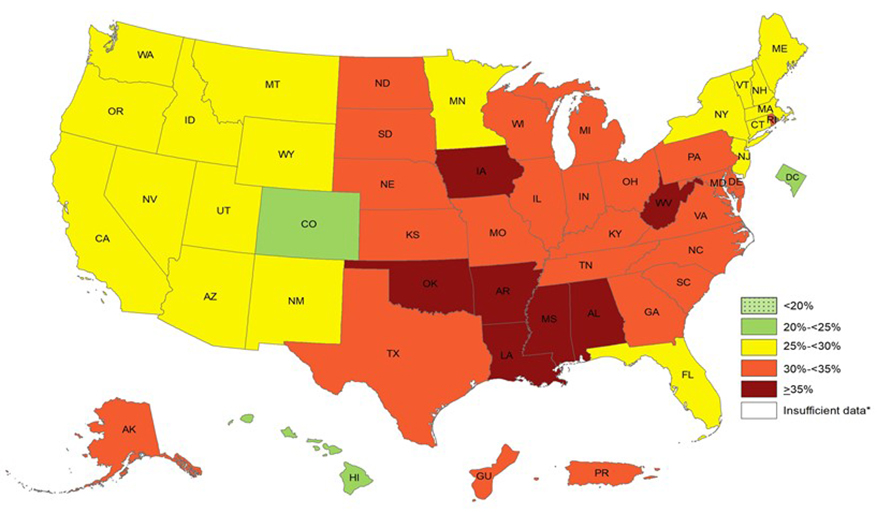 Prevalence of self-reported obesity among U.S. adults by state and territory. Graphic via the Centers for Disease Control and Prevention

The obesity rate for black adults was 39 percent, compared with 32.4 percent for Hispanics and 29.3 percent for whites.

In its report, the CDC called for a comprehensive strategy to reduce obesity prevalence, with steps including healthy eating, better sleep, stress management, and physical activity.

This article is reproduced with permission from STAT. It was first published on Sept. 12, 2018. Find the original story here.

Left: A general view of the Centers for Disease Control and Prevention (CDC) headquarters in Atlanta in 2014. Photo by Tami Chappell/File Photo/Reuters