One of the biggest success stories in the fight against cancer has been the number of children who are surviving the disease.

“It’s really one of the triumphs of modern medicine, because 50 years ago the diagnosis of a child with cancer was essentially a uniformly fatal diagnosis,” said Dr. Robert Goldsby, a pediatric oncologist at UCSF Benioff Children’s Hospital in San Francisco. “Now more than 70 percent are expected to live long-term.”

But ironically, the same treatments — chemotherapy and radiation — that are helping save so many lives can also cause a host of other health problems years later, such as fertility problems, organ dysfunction, even secondary cancers. Children who survive pediatric cancer are at particular risk for these “late effects” because they have a whole lifetime ahead to develop health problems, and their growing bodies are more susceptible to the treatments that can damage healthy cells and tissue.

A number of medical institutions around the country are now closely monitoring childhood cancer survivors and studying their long-term health. I recently spent several days with Dr. Goldsby and his team at the Survivors of Childhood Cancer Program at UCSF for a report airing Monday on the PBS NewsHour. Patients at the “Survivors Clinic,” as it is known, get regular physical exams and tests such as x-rays and blood work to monitor their health. Some patients also meet with a staff social worker to discuss issues such as school performance, family issues and mental well-being.

They also receive a unique piece of information they can carry with them the rest of their lives: a wallet-sized card called a “Survivor Health Passport.” On one side, it provides a detailed summary of the cancer treatments they received. Flip it over and it lists recommended health exams they should get in the future based on the specific health risks they face.

In this example card below provided by Survivors Clinic staff, Patient Jane Doe, who was 21 when she was diagnosed with Hodgkin Lymphoma, had multiple kinds of chemotherapy, several surgeries, and radiation on the right side of her neck. 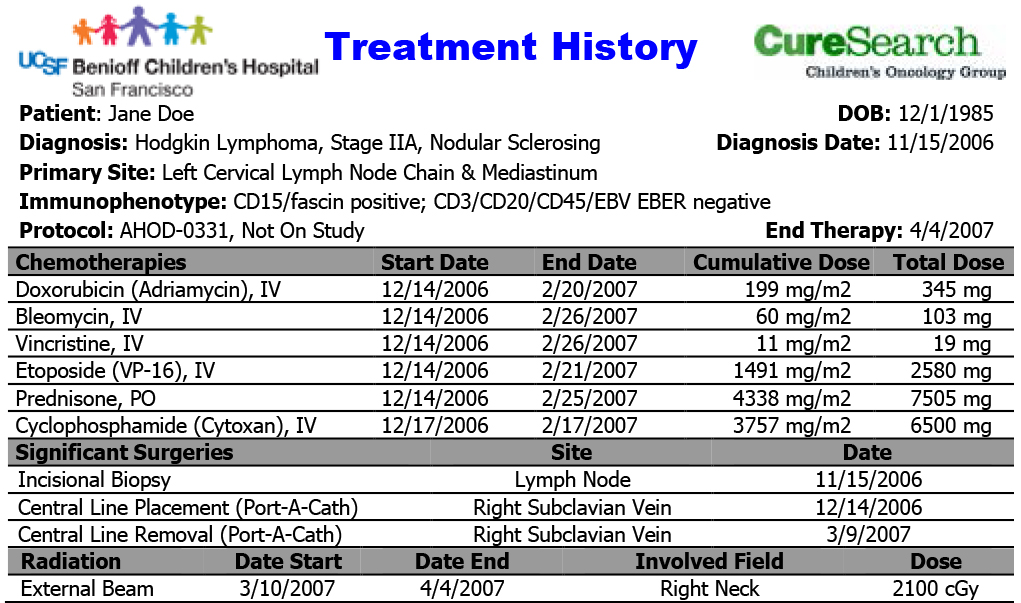 On the backside, you can see recommended follow-up care: yearly exams of her heart, lungs, eyes, reproductive organs and thyroid, as well as careful screening for possible second cancers. 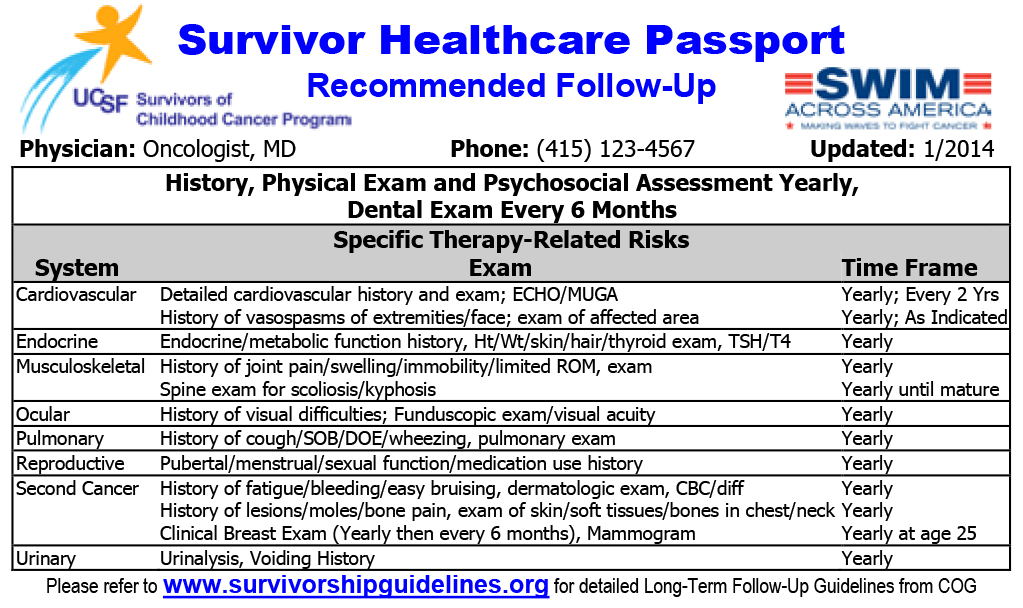 “The passport is a very simple tool that we use to educate families,” said Dr. Goldsby. “It allows them to know what their treatments have been without having to remember big names like cyclophosphamide, or doxorubicin, and things like that. It’s a nice concise thing that they can take with them when they go off to college, or if they move somewhere else, and they’ll always have it with them because they can put it in their wallet.”

One of the Survivors Clinic patients who has benefited from the card is 33-year-old Laura Allaire, who is profiled in our broadcast report. Allaire now gets yearly check-ups with Dr. Goldsby, and she’s very aware of the specific health risks she faces based on the chemotherapy and radiation treatment she received when she was 12 for Hodgkin’s lymphoma. She’s already had several treatment-related health problems in recent years: her thyroid was removed after suspicious growths were discovered, and she had a heart problem that required medication.

Allaire says the information on her passport card has been helpful when she’s dealing with medical professionals outside of the Survivors Clinic who might not understand the specific follow-up care she needs as a pediatric cancer survivor.

“The passport is really important because throughout the years I’ve found that a lot of people are actually intimidated by treating somebody like me because I am an unusual case,” said Allaire. “It’s really important that I can be an advocate for myself.”

Dr. Goldsby says as the number of pediatric cancer survivors increases — there are now more than 300,000 in the U.S. — more research is being focused on their long-term health. But for now, raising awareness about the potential side effects of cancer treatments is one of the most important aspects of his work.

“The thing I always tell every person is that we want them to focus on life and we try to focus on the positive,” said Goldsby. “But you also need to educate them that there can be some consequences of their therapy, and education around those issues is important.”

Left: Dr. Robert Goldsby, a pediatric oncologist, talks to Laura Allaire during her regular checkup at the Survivors of Childhood Cancer Program at UCSF. Photo by Jason Lelchuk