A win for Medicaid expansion in South Dakota is a victory for public health, policy experts say, but now comes the work of ensuring the people who are eligible actually get enrolled.

Fifty-six percent of South Dakota voters chose in last week’s midterm elections to amend the state constitution, expanding eligibility to any adult earning roughly $18,000 each year (138 percent of the federal poverty level), according to the South Dakota secretary of state’s office.

This decision could make an estimated 50,000 individuals eligible for health care coverage, including those without children or disabilities who are not covered by the current rules. That’s up from earlier estimates. Many of the soon-to-be eligible work in low-income jobs or self-employed, are unable to afford health care coverage on their own and have been excluded from Medicaid under South Dakota’s strict guidelines.

In the days ahead of the vote, Dr. Katherine Degen, an obstetrician and gynecologist in Rapid City, said she prayed that “people choose other people instead of politics.” When it became clear that a majority of South Dakota voters wanted to expand Medicaid, Degen was elated.

“Everybody deserves health care,” she said.

The vote to expand Medicaid “was long overdue” and “means so much to people who don’t have health insurance, and it means so much to our health care systems that are suffering,” said Rick Weiland, who co-founded the group Dakotans for Health and helped raise awareness of the successful ballot initiative. That work is not over yet, Weiland said.

The state now has until July 1 to set up a system that would be ready to enroll tens of thousands of people for health insurance coverage under the Affordable Care Act.

“The job ahead is to make sure that people who do qualify are identified, and there’s an aggressive outreach strategy to get to them, to let them know how to sign up and move forward,” Weiland said. 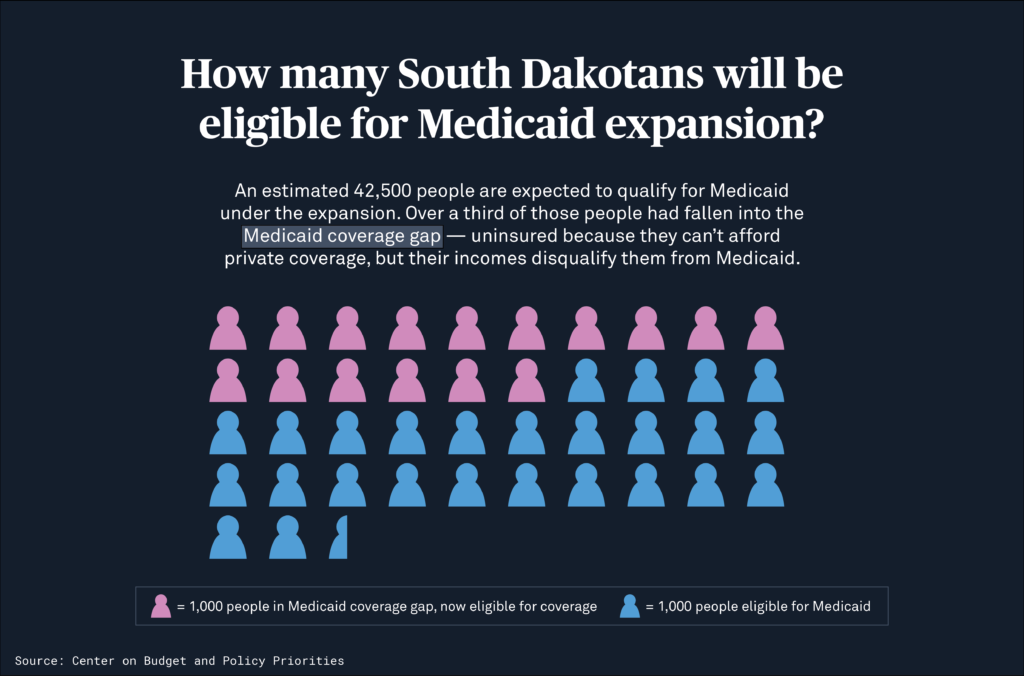 Republican leaders in the state – including Gov. Kristi Noem, whom voters reelected this month – opposed Medicaid expansion, arguing that it would be fiscally irresponsible. Advocates and health policy experts have pushed back, noting that the federal government would cover nearly all the costs of the expansion. Not only would it help people afford access to health care, supporters say, but it also could help prevent the closure of rural hospitals – a threat that has grown in recent years, especially during the coronavirus pandemic.

In a televised debate in late September, Noem acknowledged that the measure was “written constitutionally,” and said that “If the people pass it, it’ll be implemented.”

After Election Day, the South Dakota Department of Social Services announced it had formed a leadership team to identify state staff, resources and protocols before enrolling eligible South Dakotans by the July deadline – a step that is very encouraging, says Adam Searing, an associate professor at the Georgetown University McCourt School of Public Policy’s Center for Children and Families.

A few states where voters have successfully expanded Medicaid through ballot initiatives have experienced political turbulence when trying to broaden the health program, Searing said. Nebraska delayed Medicaid expansion until late 2020 after voters approved it in 2018. In Maine, Republican former Gov. Paul LePage refused to implement the changes after voters approved the expansion. In 2018, advocacy groups sued to force him to comply. (Last week, LePage lost a gubernatorial challenge to incumbent Gov. Janet Mills, a Democrat, who has instead overseen the expansion.)

South Dakota is the seventh state to attempt — and succeed — to expand Medicaid through a ballot initiative. In total, 39 states and the District of Columbia have opened Medicaid eligibility to more people under the Affordable Care Act and roughly 19 million people have health coverage as a result of expansion.

In each of those states, there has been a surge in people getting needed care, Searing said. For many, the fear of racking up medical debt was long a deterrent to getting that help when they needed it. That sometimes resulted in catastrophic treatment that was far more complicated — and costlier — than if the condition had been treated earlier, multiple experts said.

“When people have coverage, they're motivated to see the doctor,” Searing said.

In South Dakota, Medicaid expansion will help many patients who have been at greater risk of skipping doctors’ visits, but it “certainly won't fix all of the problems,” such as patients lacking money for the gas they would need to get to appointments, Degen said.

From a provider’s perspective, “You can’t run a practice based on Medicaid alone,” Degen said.

Clearly, Medicaid expansion alone is not a silver bullet for health care in America. But it has consistently proven popular with voters — and opponents’ claims that it will lead to financial failure for states have not panned out, health experts say. Now, just 11 states have not adopted the expansion. Some, like Florida and Mississippi, face challenging hurdles when it comes to the ballot initiative process, but the yes vote in South Dakota may point to a path forward.

This story was produced as part of a project for the USC Annenberg Center for Health Journalism’s 2022 National Fellowship.