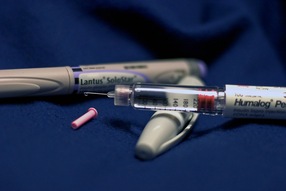 Nearly 26 million people in the United States have diabetes, according to the latest Centers for Disease Control estimate, and that number could expand to one-third of the U.S. population by 2050 if obesity and other trends continue.

The NewsHour has been covering this story, reporting on efforts to improve diabetes treatment among low-income and uninsured patients and fight childhood obesity in Mississippi.

This week, a new study highlights the importance of that effort in Mississippi and other southern states.

A claw-shaped “diabetes belt” stretches across the southeastern United States and up through Appalachia, according to a Centers for Disease Control study published in the American Journal of Preventive Medicine. More than 11 percent of people in those areas have diabetes, compared to 8.5 percent of people outside the diabetes belt.

The new analysis will allow public health officials to better target diabetes interventions and outreach to areas with the greatest need, said Lawrence Barker, the lead author of the report and associate director for science in the division of diabetes translation at the CDC.

In many ways, the finding is not a surprise.

“We’ve known for many years that there was more diabetes in the southeastern U.S., but it was a very general statement,” Barker said. “This allows us to have a much more specific idea of where we find a greater prevalence.”

The researchers found that people across the diabetes belt share many risk factors for the disease. They are more likely to be obese and more likely to lead a sedentary lifestyle than people in other regions, according to the report. The areas also have a larger African-American population — a group more at risk for diabetes.

Barker says that it’s important to note that one-third of the difference in diabetes prevalence can be attributed to risk factors that can be changed — obesity and a sedentary lifestyle. “Race, age, we can’t do anything about that,” he said. “But physical inactivity, that can be changed.”

The diabetes belt overlaps with the “stroke belt,” first defined in the 1960s, that also stretches across the southeastern U.S. The overlap isn’t surprising, since diabetes and stroke have similar risk factors, and diabetes itself is a risk factor for stroke. But there are some differences between the two belts — for example, much of West Virginia is in the diabetes belt, but not the stroke belt. Barker said the researchers don’t have a clear explanation for the differences.

He said that researchers will continue to track the diabetes belt, as they have the stroke belt.

The stroke belt has shifted somewhat over time, said Michele Casper, an epidemiologist at the CDC’s Division for Heart Disease and Stroke Prevention. It used to be concentrated more heavily on the southeast coast in the 1960s and 1970s, and moved in the 1980s toward Mississippi delta states.

Casper said that knowing about the stroke belt has allowed public health officials to target some prevention programs in those areas, such as funding interstate stroke prevention networks.

But Vivian Fonseca, an endocrinologist and president-elect for Medicine and Science at the American Diabetes Association, said that while “it’s nice to have good documentation” of the high diabetes rate in the southern states, he is less convinced that the documentation will lead to change in the diabetes rates.

“Our health system is so fragmented that no one is going to target the resources for this,” he said. “Sadly. I believe it should be done.”

We also asked our partners over at Patchwork Nation to take a look at how this county data adds up through the lens of their 12 community types. Read more here.