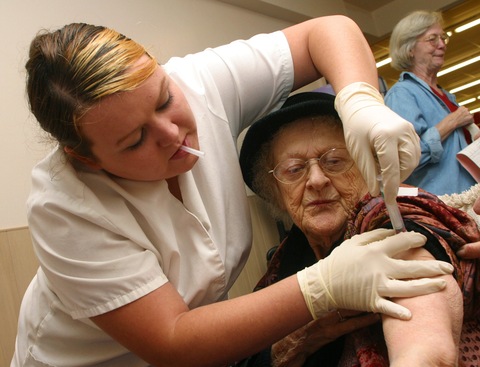 Breathe a little easier, baby boomers. The nursing shortage that looked like it might deepen just in time for your retirement may not be so certain after all.

According to a report published Monday in the journal Health Affairs, young registered nurses are now entering the workforce at a rate not seen since the 1970s.

Then, unexpectedly, everything changed. Between 2002 and 2009, the number of mid-20-something RNs jumped by 62 percent. According to the report, “If these young nurses follow the same life-cycle employment patterns as those who preceded them — as they appear to be thus far — then they will be the largest cohort of registered nurses ever observed.”

But if your local hospital already has a shortage of nurses, it might be a little early to celebrate the trend. A second Health Affairs study published Monday found that nurses rarely move very far for a job. In fact, 52.5 percent of nurses work within 40 miles of where they attended high school.

Next to teaching, the report shows, nursing is one of the least-mobile professions for women. Without intervention, areas currently struggling to produce RNs probably won’t be seeing an upswing in their numbers any time soon.

The increased numbers also won’t automatically translate to enough nurses who specialize in geriatrics. That, too, will take work.

So what does all that mean for an aging U.S. population? Susan Dentzer, editor-in-chief of Health Affairs and former NewsHour health correspondent, answers our questions below.

These numbers seem relatively optimistic. How will they relate to the nursing shortage?

DENTZER: We can anticipate a much larger group in nursing in the years ahead, assuming this surge of younger women into the nursing profession continues. And that’s very positive given what’s widely perceived as a nursing shortage. But the phrase ‘nursing shortage’ tends to suggest a wider problem than exists overall. The real issue isn’t a shortage of nurses in the general population — it’s a problem of retaining nurses in some hospitals. There are lots of other opportunities for nurses out there, including within insurance companies, private physicians’ offices and other businesses. So when people speak of a nursing shortage, they’re typically referring to the difficulty finding nurses to work in some hospitals in some parts of the country.

Now, with more young nurses entering the field, I think we can imagine that the whole issue of the nursing shortage is going to get even more complicated. As we know, the health care system is going to be changing, too. There’s an increasing trend to keep people out of hospitals that don’t need to be there, to prevent re-admissions, etc. We’re probably going to be going through a period where hospital use declines. And as that’s the case, there will probably be fewer patients in hospitals and less of a problem. If you put the whole story together, there will be lots of opportunities for nurses across the board in health care, lots of people going into registered nursing, and proportionally fewer nurses in hospitals than in the past. That all means a much better situation in the nursing labor market than we’ve had for quite some time.

What led to this surge of younger women in nursing?

DENTZER: First of all, word got out over the last decade that there were opportunities in nursing. Then a lot of educational programs became available to accommodate the higher demand. Some of the two-year associate degree programs expanded and some efforts were made to create accelerated options in conventional baccalaureate programs and also options for people in other fields who wanted to switch into nursing mid-career. Is all of that enough? Who knows. But the reality is that people go where the jobs are. A shortage can’t persist forever in economics and that’s what it looks like is happening over the last decade. It also looks like it could be the same in the decade to come.

From that economic perspective, if supply rises to equal demand, would that mean that the salaries and perks that have been drawing some nurses to the field might decline?

DENTZER: I don’t think it’s likely nursing salaries are going to fall. They may not increase as rapidly as they have over the most recent decade. That’s the way markets work. Then again, it’s not clear the salary piece was necessarily the problem in the first place. If you think about why hospital nurses left in such great numbers, it’s because those jobs are hard, they felt overworked, under-appreciated by hospital administrators, that they were working too much overtime and felt compelled to work shifts that aren’t desirable. They went to other businesses where they could make a good living, work nine to five, and be rid of some of the stresses of hospital nursing. As we move to an environment where more and more care is being delivered outside of hospital settings, that’s just going to open up a wider range of opportunities.

DENTZER: As we try to boost the provision of primary care in this country, we’re seeing a big move toward patient-centered medical homes. In advanced primary care practices, a lot of care is provided by nurse practitioners, registered nurses, community health professionals and mental health therapists. It’s team-based care, and much of it — arguably the preponderance of it — is provided by nurses.

Now all of this doesn’t mean we’re going to have every sort of nursing category filled. For example, we don’t have enough geriatric nurses and it doesn’t look like we’re on a trajectory to meet the coming needs of our aging population. But these are the kinds of things that can be addressed over time. The fact that there are so many younger women interested is certainly promising, and if we can just match up training opportunities with the need for more nurses that can care for elderly patients, we can make a lot of headway.

The second article in Health Affairs shows that nursing is one of the least-mobile professions. Why does it matter that nurses tend to stick close to home?

DENTZER: If you’re worried about the supply of nurses in a less-populated part of the country, what this tells you is you better make sure there’s a nursing school there. You should expand nursing schools in those areas, fund programs to provide incentives for people that come from those areas to go to nursing school elsewhere — on the theory they’ll go back home. And have financial aid policies in place that will help people from lower income groups go to school. All of those things need to be done. It also tells us that we cannot just sit back and let the market run the whole thing without making meaningful interventions in nursing education programs that will help ensure you don’t just get a greater number of nurses, but you have them where you need them.

For more on the shifting role of nurses, watch this report from Health Correspondent Betty Ann Bowser: