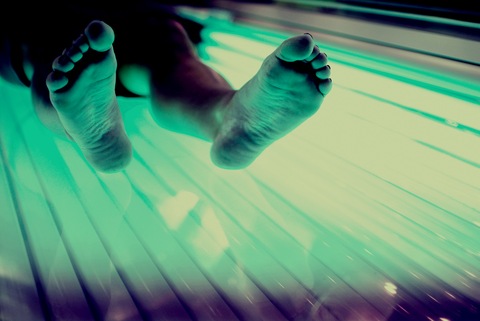 In the United States, indoor tanning is a nearly $5 billion per year industry, providing a backbone for close to 19,000 small businesses across the country. To put this in perspective, there are 5,000 more tanning salons than McDonald’s fast food chains in America.

With so much money on the line, that means the tanning industry’s lobbyists and other advocates are attempting to shift national conversation away from the health risks of tanning to the health benefits.

NewsHour talked to Huber by phone this week:

How many people in the U.S. are tanning?

And looking into tanning geographically, women in the south and Midwest are much more likely to go tanning. In the Midwest, 44 percent of young, white women go tanning every year. It’s a huge slice of the population.

Are there any studies that link indoor tanning with skin cancers, like melanoma?

Huber: Yes. In 2009, the World Health Organization’s International Agency on Cancer Research declared UV light from tanning beds a carcinogen. Since then, a number of studies have reaffirmed this claim.

One of the bigger studies from University of Minnesota showed that people who tan indoors have a much, much higher risk of melanoma than those who never tan — a 74 percent greater risk. The study also established that the more time you spend in a tanning bed, the more likely you are to develop melanoma.

What has been difficult for scientists to establish is causality — that the tanning beds are the direct cause for developing melanoma. But among mainstream medical authorities, there is pretty broad agreement that indoor tanning increases melanoma risk.

How is the tanning industry changing?

Huber: The tanning industry has gone on the offensive trying to discredit its critics, mainly dermatologists and American Cancer Society, by calling them the “Sun Scare” industry.

The tanning industry says critics are promoting a message to avoid all UV light, so that they can earn a profit.

Why do tanning industry advocates believe doctors and organizations like the American Cancer Society profit from studies that identify the risks of high-exposure to UV light?

Huber: Dermatologists, according to the industry’s logic, benefit from this conspiracy because they get frightened people into their offices as patients. The American Cancer Society, they say, gets donations. The industry says these groups are possibly killing more people than tobacco did by causing what they portray as a deadly epidemic of vitamin D deficiency.

If you start looking at training materials for salon employees and industry publications, that’s where you see a lot of this demonizing of doctors, dermatologists.

In order to counter the “Sun Scare” industry, the tanning industry has also created and funded a whole network of pro-vitamin D groups.

For example, there’s the Vitamin D Foundation that promotes health benefits. You look at their website. It looks like a nonprofit with no particular affiliation. But then look at their tax documents and you’ll discover its officers are all tanning industry players.

The message they’re spreading really benefits the tanning industry because they are telling Americans that getting vitamin D from tanning is good for your health.

Who is most likely to fall prey to this positive spin on indoor tanning?

Huber: Teens. That’s really the big problem — adults understand the risk, but when you look at how popular tanning is among teens, and you think about how focused teens can be on looks and how hard it can be for them to think about consequences, that’s pretty problematic.

Two states — California and Vermont — have banned tanning for minors, anyone under 18. New York instituted a ban for anyone under 17. And Chicago instituted a city-wide ban for minors. There’s been a lot of activity in state legislatures with lawmakers trying to impose more restrictions on minors’ access to indoor tanning.

Interview was slightly edited for brevity.