The Day Polio Began Losing Its Grip on America 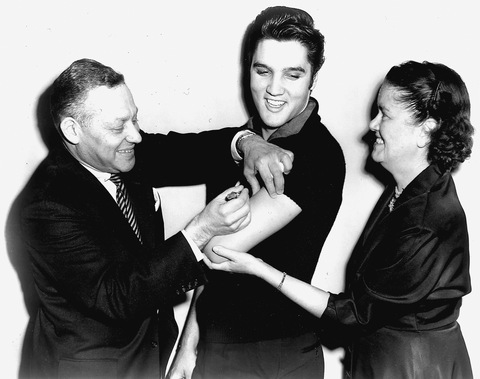 Elvis Presley receives the Salk polio vaccine in 1956. Awareness about the vaccine led to the end of polio in the U.S. Most babies today still receive the injection. Photo courtesy of March of Dimes.

April 12, 1955, was supposed to be Tommy Francis’s day. At 10:20 a.m., the distinguished epidemiologist conducted an international press conference in Rackham Auditorium at the University of Michigan. The topic was the field trial he had just completed — the largest of its kind ever — evaluating the efficacy of the poliovirus vaccine developed by Dr. Jonas Salk at the University of Pittsburgh.

It is hardly hyperbole to note that the speech by Dr. Thomas Francis Jr. was eagerly awaited by most of the world. Few diseases were capable of arousing more fear than poliomyelitis. Almost every summer, polio epidemics left behind a wake of paralysis and death; horrific images of children struggling to walk or trapped inside iron lungs were etched into every parent’s brain.

President Franklin Delano Roosevelt, the world’s most famous polio patient, significantly advanced the American fight against polio. In 1937, convinced that nothing short of the conquest of the disease was required, Roosevelt announced the formation of a National Foundation for Infantile Paralysis (NFIP) that would “lead, direct, and unify the fight of every phase of this sickness.” 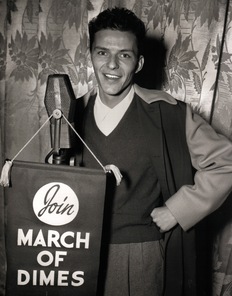 Soon, millions of Americans were responding to the pleas of the radio comedian Eddie Cantor to “send their dimes directly to the President at the White House . . . and we could call it the March of Dimes.”

By the late 1940s, several groups of researchers had independently identified the three distinct types of poliovirus, a microbial distinction that was essential to the development of an effective vaccine. At Harvard, John Enders, Frederick Robbins, and Thomas Weller developed a method of growing poliovirus in non-neural tissue using a tissue culture of monkey kidneys — a seminal achievement that won them the Nobel Prize in 1954.

At the University of Cincinnati, Albert Sabin began work on a live attenuated oral vaccine that he insisted would provide better immunity than a killed-virus vaccine but would not be ready for widespread use until 1961. Jonas Salk, who relied on older vaccine-production methods involving formalin-killed viral strains, was able to proceed more rapidly. By early 1953, Salk had begun campaigning relentlessly for a national field trial of his vaccine.

For this critical but unglamorous task, the NFIP turned to Salk’s former teacher, Thomas Francis, who had introduced Salk to the design of killed-virus vaccines at the University of Michigan School of Public Health. Francis was internationally known for his deft direction of complex field trials for influenza virus vaccines during World War II. He agreed to conduct the polio-vaccine field trials if three inviolable rules were followed: there would have to be two study groups, one given vaccine and another, at least as large as the vaccine group, given placebo; the trial would have to be conducted in a double-blind manner; and the NFIP was not to interfere.

The study formally began on April 26, 1954, when Randy Kerr, a six-year-old boy from McLean, Va., received the first inoculation. No detail of the field trial escaped Francis’s watchful gaze — from complex issues of experimental design to such mundane matters as the packaging of vaccine, the composition of safety instructions for parents, and the selection of the “Polio Pioneers,” the 650,000 children who received the vaccine and the 1.18 million who received a placebo. The trial relied for its implementation on some 150,000 volunteers, 15,000 schools, and 44 state departments of health. 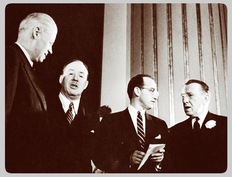 Before a jam-packed audience of scientists and dignitaries, Francis approached the lectern. He began his speech with two simple declarative sentences: “The vaccine works. It is safe, effective, and potent.”

Thrilling as this news was, there was one person in the auditorium who was visibly unhappy with Francis’s report: Jonas Salk. As the diminutive virologist took the podium after Francis’s speech, an avalanche of applause greeted him. Yet this public show of appreciation on the part of his scientific peers was not enough for Salk, who insisted that he had created nothing less than the perfect vaccine. Too flustered even to mention the names of the colleagues who had worked with him at Pittsburgh, Salk assailed the accuracy of Francis’s findings.

The failures encountered in the trial, he declared, were caused by Merthiolate, a mercury-based antiseptic that had been added to the batches of vaccine, against Salk’s wishes, at the express orders of the U.S. Laboratory of Biologics Control. With a dramatic flourish, Salk proclaimed that his new and improved (Merthiolate-free) vaccine might well be 100 percent effective.

Salk’s comments created a controversy that his critics used to disparage him for the rest of his career. Backstage, a furious Francis was heard scolding his former student. “What the hell did you have to say that for?” Francis railed. “You’re in no position to claim 100 percent effectiveness. What’s the matter with you?” 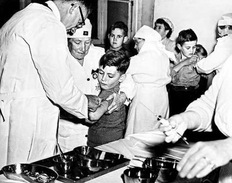 Children line up for their shots in September 1961. Photo courtesy of Jason A. Roberts/Sydney Morning Herald.

Salk’s failure to recognize the achievements of his coworkers and his injudicious (albeit ultimately correct) claims aside, the rest of the world was eager to lionize him as a bona fide medical hero. As the journalists scrambled out of the auditorium to call their editors, the spotlight of fame permanently shifted from the epidemiologist to the young creator of the polio vaccine.

For many days, there wasn’t a front page of a newspaper, a television or radio show, or a newsreel that did not shower Jonas Salk with praise and gratitude. For millions of parents and their children around the world, Salk became the avatar of medical progress. Even so, a decade later, Salk admitted, “I was not unscathed by Ann Arbor.”

It takes little imagination to understand why April 12, 1955, turned out to be Salk’s rather than Francis’s day. After all, he developed the first effective vaccine against the dreaded polio; his teacher, Thomas Francis, merely undertook the chore of testing its efficacy on a mass scale and then confirmed to the world that Jonas Salk had succeeded.