The House just voted to regulate PFAS. Here’s what you need to know

A class of industrial chemicals linked to a range of health effects, including reproductive and developmental issues, has become a hot-button issue on Capitol Hill, on the presidential campaign trail and in state legislatures across the country.

The U.S. House of Representatives approved a bill Friday that would set a deadline for the Environmental Protection Agency to implement a national drinking water standard for per- and polyfluoroalkyl substances, commonly known as PFAS.

According to the Food and Drug Administration, these chemicals are used in a range of products, including stain- and water-resistant fabrics, fire-fighting foams, non-stick cookware and food packaging. That’s because PFAS are resistant to elements like fire, water and oil.

But that resistance is also what allows PFAS to stick around in the body, or bioaccumulate, and persist in nature. Several of these chemicals have been found in drinking water across the country.

The EPA said in February 2019 that it would propose a national drinking water standard for two of the oldest and most well-studied chemicals in the PFAS family — perfluorooctanoic acid (PFOA) and perfluorooctane sulfonic acid (PFOS).

In December, the agency sent proposed regulations for those two chemicals to the Office of Management and Budget for review, a move that it said was the next step toward establishing a federal standard under the Safe Drinking Water Act. It’s unclear how long that process will take.

Trump has threatened to veto the House’s PFAS legislation, which likely faces an uphill battle in the Republican-controlled Senate. The administration issued a statement arguing that the bill would “set problematic and unreasonable rulemaking timelines” for the EPA and impose burdensome costs on governmental agencies.

While the legislative debate plays out in Washington, 2020 presidential candidates are taking hold of the issue, promising to crack down on the chemicals if elected. And in the absence of federal regulations, states have implemented their own efforts to clean up polluted water and prevent further PFAS contamination.

Nearly 5,000 different substances make up the PFAS family. Human studies have linked PFOA exposure to decreased vaccination response, thyroid disorders and kidney and testicular cancer. Exposure to certain PFAS, including PFOA and PFOS, has been shown to lower a person’s chance of getting pregnant, increase cholesterol, negatively impact the immune system and affect children’s growth, learning and behavior.

A 2018 report from the nonprofit Environmental Working Group found that more than 100 million Americans may have PFAS in their drinking water.

But ingestion isn’t the only way that people can be introduced to the chemicals. Taking a hot shower using PFAS-contaminated water, for example, would cause a person to risk both breathing in the compounds and absorbing them through the skin.

A 2007 study estimated that 98 percent of Americans had some type of PFAS in their blood, according to the Centers for Disease Control and Prevention. Smaller concentrations of PFAS were found in samples taken in 2004 compared to those taken in 1999, likely the result of decreased or discontinued use of these chemicals like PFOA and PFOS by various industries.

Christopher Weis, a toxicologist with the National Institute of Environmental Health Sciences, estimates that the average person’s blood has a PFAS concentration of four or five parts per trillion, a number that is not “presently associated” with any health effects.

There are generally two types of PFAS, long-chain and short-chain. Long-chain PFAS take longer to leave the body, but both categories persist in the environment.

PFOA and PFOS are long-chain, and they feature eight carbon atoms that are bonded both to each other and to large fluorine atoms. Those carbon-fluorine bonds are so strong that it’s all but impossible for them to be broken down by natural processes. 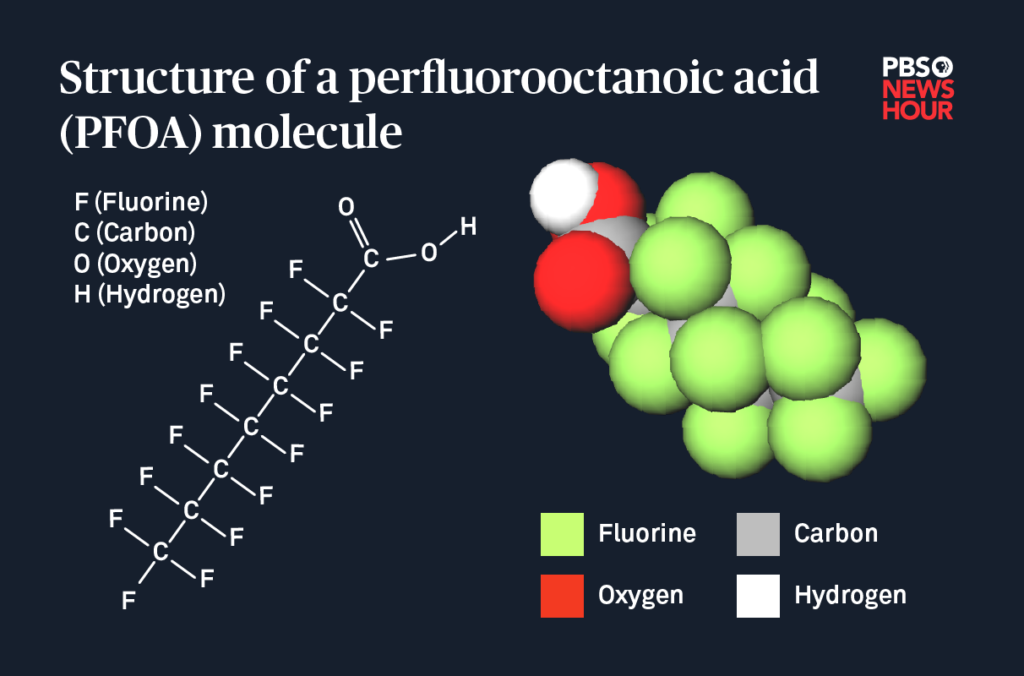 “Bacteria feed on all kinds of detritus and things that end up in water, [and] most of those are carbon-based molecules,” Weis said. “The problem with these PFAS is the carbons can’t be used as fuel by bacteria.”

Consequently, those PFOA and PFOS molecules will virtually never biodegrade.

PFOA and PFOS have a half life of between three to five years in humans. That’s how long it takes the body to eliminate 50 percent of those chemicals once they’ve built up in the blood.

Those two chemicals are no longer manufactured in the United States, but consumers may still be exposed to them through imported products.

Many American companies have instead begun to use short-chain PFAS like GenX, which appear to be eliminated from the body more quickly. Studies conducted on rodents, however, suggest that those PFAS impact the thyroid hormone and the liver similarly to their long-chain counterparts.

What would the House bill do?

The House PFAS legislation, called the PFAS Action Act, would require the EPA to establish a national drinking water standard for a minimum of two of the most common PFAS, and consider designating all PFAS as hazardous substances under Superfund law.

The legislation would also prohibit the manufacture or sale of any chemical in the PFAS family that the agency has found to pose “an unreasonable risk of injury” to human health or the environment.

“Every American deserves access to clean drinking water,” Rep. Dan Kildee, D-Mich., a co-sponsor of the House bill, told reporters during a phone call Thursday. “The PFAS Action Act will protect families from PFAS in their drinking water, in their lakes, rivers and streams, and in the air by requiring PFAS to be listed under the Safe Drinking Water Act, the Clean Water Act and the Clean Air Act.”

House Republicans on the Energy and Commerce Committee released a statement slamming the act for pushing a “purely partisan, anti-science regulatory framework” that they argue could ultimately undermine the EPA’s ability to address PFAS.

In a dissent to the legislation, Rep. John Shimkus, R-Ill., argued that applying a testing requirement to each individual PFAS chemical would be an “enormously expensive and time-consuming” task, and that it would be unreasonable to require the EPA to make regulatory determinations on PFAS on an expedited timeline. Doing so, he wrote, would force the agency to “give less attention to the science, costs, and practicality of these regulations.”

Other efforts to address contamination

Despite the debate over the House PFAS legislation, Congress set aside money in the latest bipartisan spending bill for PFAS cleanup across the country. A defense spending bill approved earlier in the year also included $13 million to study and clean up PFOS and PFOA on military installations.

But those bills did not feature provisions that were introduced earlier on in the legislative process, including one that would have required the EPA to establish water pollution control standards for PFAS and another that would have instructed the Agency for Toxic Substances and Disease Registry to carry out more studies regarding how PFAS impacts human health.

Democratic presidential candidates have also begun to speak out about the need for regulating PFAS.

2020 hopeful Sen. Elizabeth Warren, D-Mass., has laid out the steps she would take as president to protect drinking water, including the implementation of “a strong and nationwide safe drinking water standard” that includes PFAS.

Former Vice President Joe Biden has also addressed PFAS and the need to ensure access to clean drinking water in his campaign platform.

At a campaign event in New Hampshire last month, presidential candidate Sen. Bernie Sanders, I-Vt., announced that he would enact national drinking water standards for PFAS and other hazardous chemicals.

PFAS are already a topic of concern for many New Hampshirites.

In 2014, the United States Air Force discovered PFOA and PFOS in monitoring wells at the former Pease Air Force Base in Portsmouth.

In the town of Merrimack, the 2016 discovery of PFAS contamination in the public water system prompted the state to investigate other local water sources for the chemicals.

“We have [a] massive site investigation ongoing where we’re looking into everything you can imagine: groundwater, surface water, soil contamination, stormwater runoff, wastewater contamination, you name it,” said Jim Martin, a spokesman for the New Hampshire Department of Environmental Services.

But a lawsuit brought by the chemical company 3M, which manufactures PFAS, and local stakeholders has put those rules in limbo.

Several other states have adopted or are in the process of establishing maximum contaminant levels (MCLs) for multiple chemicals in the PFAS family, many of which are lower than the federal guideline of 70 parts per trillion for PFOA and PFOS specifically.

Next door to New Hampshire, Vermont has established an interim drinking water standard of 20 parts per trillion for five PFAS. The state requires water systems to test for those chemicals and find alternative sources if concentrations above that standard are detected.

Vermont has also instructed its Agency for Natural Resources to adopt formal drinking water standards for those five chemicals by the beginning of February.

What would it take to eliminate the threat from PFAS?

Most of the current efforts focus on regulating specific PFAS that have been studied at length and have the most evidence linking them to negative health effects.

But because the PFAS is a large class of chemicals, experts note that it’s not feasible to regulate each chemical individually.

“We just finished a study on PFOA, which took years to do and millions of dollars to implement. We simply cannot do that with 4,700 chemicals,” Weis said. “We must find a way to wisely address these chemicals, toxicologically and otherwise, as a class.”

Martin, the spokesman for the New Hampshire Department of Environmental Services, hopes the EPA will “move as quickly as possible” to set an enforceable drinking water standard for PFAS, which he characterized as a “nationwide problem.”

In addition to establishing federal regulations on these chemicals, he wants to see Washington “eliminate PFAS at the source” by prohibiting products that contain them from being imported into the United States.

“Really, the federal government needs to take action on an industrial and consumer level to eliminate these chemicals,” Martin said. “And that’s when we’ll be able to start seeing a reduction, hopefully, in their impact.”