Nov. 11 marks a significant day in both medical and art history. It was on this day in 2006 that the Board of Trustees of the Thomas Jefferson University in Philadelphia agreed to sell a masterpiece, “The Gross Clinic,” to both the National Gallery of Art in Washington D.C. and the Crystal Bridges Museum of American Art in Bentonville, Arkansas.

The price was a jaw-dropping $68 million.

“The Gross Clinic” depicts the famed Philadelphia surgeon Samuel Gross in full (and bloody) glory, performing an operation as his medical students, seated in the amphitheater, watch in wonder. Originally, the painting, which was not exactly popular when it was first unveiled in 1876, was begrudgingly purchased by the Jefferson Medical College for a mere $200.

Today, the barrage of images and stories depicting doctors battling death have become standard entertainment fare. Even the doors of the operating room, once the exclusive domain of surgeons, have been thrown wide open. Every day, millions watch lifesaving operations on television, both dramatic representations and actual procedures.

Consequently, it is difficult for the 21st century observer to imagine the shock and revulsion Thomas Eakins provoked with both “The Gross Clinic” in 1876 and with a follow-up portrait entitled “The Agnew Clinic,” which depicts the surgeon David Hayes Agnew of the University of Pennsylvania.

Today, with an ever-more lucrative global art market, the history behind Eakins’ masterpieces are as important as ever.

I had the distinct pleasure of reviewing the striking realism of Eakins work for the New York Times in 2002, when these two paintings and more than 150 of Eakins’ other pieces were on display at the Metropolitan Museum of Art in New York City.

Here is an excerpt:

Eakins, an aficionado of all things scientific, frequented medical lectures and surgical demonstrations and even taught anatomy at the Pennsylvania Academy of the Fine Arts. Convinced that medicine represented one of the greatest achievements of 19th-century America, he set out to precisely capture on canvas the striking advances then being made.

Eakins often attended Dr. Samuel Gross’s surgical clinics at the Jefferson Medical College in Philadelphia, and in 1875 approached Dr. Gross about painting him at work. The result was one of the first true “action shots” in the history of medicine.

Even in the years after the discovery of ether, most American surgeons emphasized the importance of speed in their work. Gross believed that speed alone was a chimera and that many of his colleagues were impetuous “knife’s-men,” who were far too “hasty” to remove a limb or create a lasting deformity. Instead, Dr. Gross advocated “conservative surgery,” operations that conquered disease and contributed to the long-term health of the patient.

The operation depicted in the Gross painting is a resection or removal of an infected part of the bone. The ultimate goal is saving the patient’s leg. Remarkable for its violent hammering, sawing and chiseling, Dr. Nathan Smith, a leading surgeon of the day, called the procedure “the most laborious and tedious, both to myself and the patient, which I have ever performed.”

In 1876, many doctors still preferred the faster amputation as the treatment of choice. Dr. Gross argued that such shortsighted convenience for the surgeon invariably led to lifelong disability for the patient.

Dr. Gross is shown in a black, frock coat that is stiff with the blood of operations past and redolent of his vast surgical experience, not to mention a veritable culture plate for all kinds of pathogenic germs.

Much to Eakins’s disappointment, ‘The Gross Clinic’ was poorly received.

Indeed, postoperative infections were among the most common and deadly complications 19th century surgical patients experienced. Yet despite the publication of Louis Pasteur’s germ theory of disease and Joseph Lister’s doctrine of antiseptic surgery in the 1860’s, the potential spread of germs by the doctor’s unwashed hands was not yet universally accepted by the American medical profession in 1876. One of the most eloquent opponents of these theories was Dr. Samuel Gross.

To the surgeon’s left is a cowering woman shielding her face. Although Eakins left no written documentation explaining her inclusion, Dr. Sherwin Nuland, the late surgeon and historian, once suggested that she was a family member. “It was common for charity cases to require a relative as a witness to the operation,” Dr. Nuland told me years ago, “and this often served as a type of informed consent.”

Others have suggested, somewhat facetiously, that the woman may have been Dr. Gross’s next patient.

Much to Eakins’s disappointment, “The Gross Clinic” was poorly received. Many people considered its gory details, including Dr. Gross’s blood-soaked hands, inappropriate. The committee in charge of selecting American art for the United States Centennial Exhibition of 1876 rejected it. Instead, the painting, 8 feet by 6 feet, was mounted in a “hospital exhibit,” still part of the festivities but far away from the building devoted to the fine arts.

Thirteen years later, in 1889, several University of Pennsylvania medical students collected $750 to commission Eakins for a portrait of their retiring professor of surgery, Dr. D. Hayes Agnew. An authority on gunshot wounds, Dr. Agnew was best known for his failed attempt to save the life of President James A. Garfield in 1881 after he was shot. 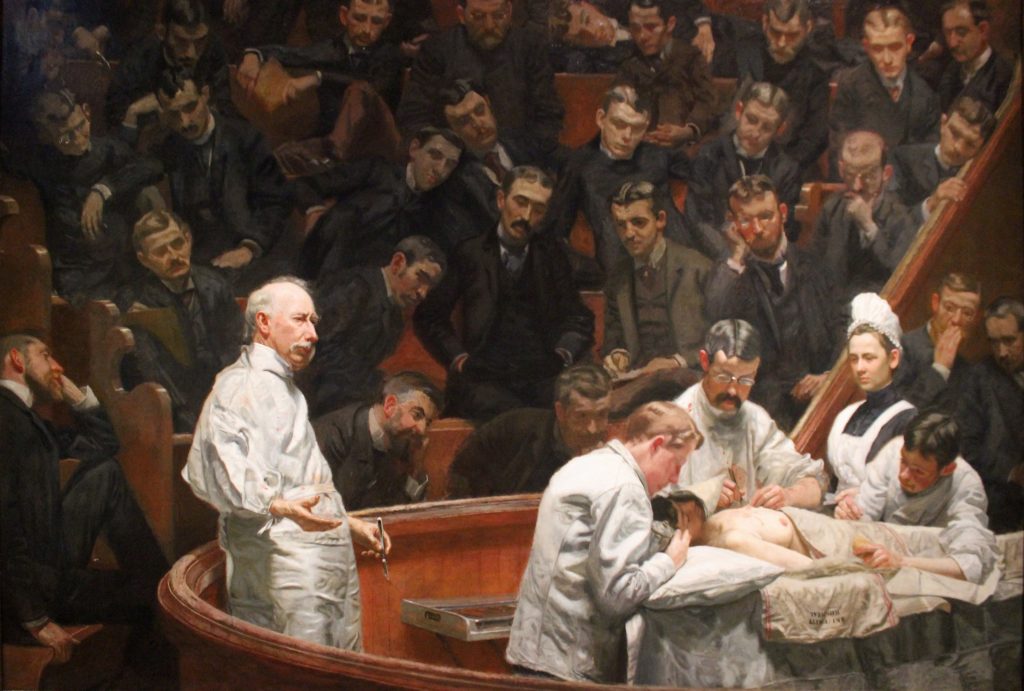 Thomas Eakins painted “The Agnew Clinic” in 1889 at the behest of University of Pennsylvania medical students. Source: Wikimedia Commons

Eakins completed the painting of Dr. Agnew’s clinic in three months. No mere portrait, the work, 7 feet by nearly 10 feet, depicts Dr. Agnew in a regal stance, away from the operating table, while his assistants complete a mastectomy on an anesthetized woman.

Well aware of the critical response to “The Gross Clinic,” Dr. Agnew insisted that his hands and gown be free of blood. In the background, a constant of medical education is on display: snoozing medical students.

Much had changed in the world of surgery in the years between these paintings, and Eakins made sure to incorporate that progress. In Dr. Gross’s day, surgeons still relied on natural daylight, and operations were performed at midday when the sun shone best through a skylight. Dr. Agnew is shown working under artificial illumination.

Dr. Gross’s patient is anesthetized with an ether-soaked cloth on his face while Dr. Agnew’s patient benefits from an ether cone, a far more controlled method of administering anesthesia.

Most important, by 1889, surgeons could no longer ignore the benefits of Listerism — applying antiseptic chemicals like carbolic acid to the surgeon’s hands, gown, drapes, and in the surgical wound to prevent the entry of germs.

The careful observer will note, however, that while they are garbed in white gowns, Dr. Agnew and his assistants are not wearing rubber surgical gloves. This is because gloves were not introduced until the next winter, by Dr. William Halsted, a Johns Hopkins surgeon, whose head nurse developed a bad rash after repeatedly dousing her hands in the corrosive antiseptic agents.

“All I was trying to do was to picture the soul of a great surgeon.”

When Eakins displayed “The Agnew Clinic” at his art dealer’s gallery, several critics called him a butcher. Shortly afterward, the painting was rejected for showings by the Society of American Artists and the Pennsylvania Academy of the Fine Arts. With tears in his eyes, Eakins responded, “All I was trying to do was to picture the soul of a great surgeon.”

Still, the two surgical paintings were seen by large crowds at the World’s Columbian Exposition in Chicago in 1893 and at the Louisiana Purchase Exposition in St. Louis in 1904. But for most of Eakins’s lifetime, these masterpieces were primarily viewed by medical students at Jefferson and the University of Pennsylvania in between their lectures. In November 1917, a year after Eakins died, the Metropolitan Museum staged a memorial exhibition of his paintings, including the two surgical works.

A month later, under considerable local pressure, the Pennsylvania Academy held its own show.

The the two paintings never fail to take away the breath of all fortunate enough to view them. They are, indeed, American masterpieces of medicine, art, and culture.

There is a happy ending to this Philadelphia story. Thomas Jefferson University gave local museums and government institutions 45 days to match the offer. On December 21, 2006, a few weeks after the announcement of the deal that threatened to remove a now beloved masterpiece from its home town, a consortium of more than 3,400 Philadelphians, donors, history aficionados, and art lovers organized to match the purchase price so that “The Gross Clinic” would remain in Philadelphia. The deal, which also required an extension of time, the sale of a few lesser-known Eakins paintings, and a hefty bank loan, was finalized in January of 2007.

“The Gross Clinic” currently hangs alternatively in the Pennsylvania Academy of Fine Arts and the Philadelphia Museum of Art, the very same museum where Sylvester Stallone famously ran up the steps in the 1977 film, Rocky. And when it comes to medical institutions valuing the art of medicine, “The Agnew Clinic” continues to take pride of place at the University of Pennsylvania, while only a copy of “The Gross Clinic” hangs at Thomas Jefferson University.

So I leave you with this final thought:

Today, Eakins is, of course, revered as a master, but even in his lifetime, he had his vocal and influential admirers. Shortly after Eakins painted a portrait of Walt Whitman, the grizzled poet wrote: “I know of but one artist, and that’s Tom Eakins, who could resist the temptation to see what they think ought to be rather than what it is. Eakins is not a painter, he is a force.”

Left: Viewers crowd around 'The Gross Clinic' painting during the 2007 public opening at the Philadelphia Museum of Art in Philadelphia. Photo by Tim Shaffer/Reuters